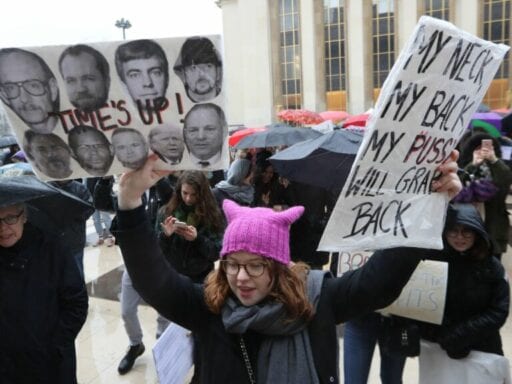 Her story is a profound reminder of progress regardless of Trump.

Advice columnist E. Jean Carroll is one of more than a dozen women to accuse President Trump of sexual assault, harassment, or other misconduct.

Many of those women came forward before the election in 2016. Trump denied the allegations (and has now denied Carroll’s too) and was elected despite them. He’s still in office. Just as Justice Brett Kavanaugh sits on the Supreme Court, even though Christine Blasey Ford testified that he sexually assaulted her when they were in high school. Just as Roy Moore, who has been accused of pursuing underage girls, has announced his second run for United States Senate.

It’s easy to feel like nothing has changed and nothing ever will. If the first 21 women didn’t have an impact, what will one more do?

But that’s not the whole story. The women who accused Trump of sexual misconduct may not have toppled his presidential bid. But they arguably paved the way for the #MeToo movement to enter its most public phase in 2017. One of them, Summer Zervos, has an ongoing lawsuit against Trump that could force him to turn over campaign communications about her and any other woman who has accused him of sexual misconduct. All these women helped create the conditions under which Carroll, who writes that she long feared speaking out, was finally able to do so.

It’s too soon to tell what the effects of Trump’s accusers, and the many who followed them in the #MeToo movement, will have on the president, or on American culture, in the long term. But they’ve already had one effect: They’ve created a critical mass of people who will stand with anyone who speaks up about harassment or assault, making it, if not entirely safe, at least that much safer to come forward.

Others have paved the way for Carroll to speak out

In a cover story published in New York magazine on Friday, Carroll writes that in 1995 or 1996, Trump assaulted and forcibly penetrated her in a dressing room at the New York department store Bergdorf Goodman.

“This is a completely false and unrealistic story surfacing 25 years after allegedly taking place and was created simply to make the President look bad,” the White House said in a statement to New York.

Trump also issued a longer statement on Friday, saying that he has never met Carroll and that her allegation is an attempt to sell her upcoming book. “If anyone has information that the Democratic Party is working with Ms. Carroll or New York Magazine,” he added, “please notify us as soon as possible.”

But Carroll says the incident left a lasting impact on her. Perhaps in part because of the assault, she writes, she has never had sex since that day.

She also says she didn’t speak out before now because “joining the 15 women who’ve come forward with credible stories about how the man grabbed, badgered, belittled, mauled, molested, and assaulted them, only to see the man turn it around, deny, threaten, and attack them, never sounded like much fun.”

She also says that at the time, a friend advised her to stay silent about the incident, saying, “Tell no one. Forget it! He has 200 lawyers. He’ll bury you.”

Indeed, Trump has denied the many other allegations against him and attacked the women behind them, accusing them of being liars who want to destroy him politically.

But they’ve fought back too. Zervos, a former Apprentice contestant who says that Trump sexually assaulted her in 2007, has sued him for defamation. She says that by calling her a liar after she went public with her account in 2016, Trump harmed her “reputation, honor, and dignity.”

Trump’s lawyers have fought the suit, filed in New York court, arguing that a sitting president cannot be sued in state court. But they’ve lost every step of the way, most recently in March when an appeals court judge ruled that the suit could go forward.

As part of the suit, Zervos’s lawyers have subpoenaed all Trump campaign documents relating not just to Zervos but to “any woman alleging that Donald J. Trump touched her inappropriately.” That means that if her team succeeds, her suit could expose what the campaign knew, and what it did, about a variety of allegations beyond her own.

Also suing Trump: Alva Johnson, a former campaign staffer who alleges that he kissed her without consent in 2016 and paid her less than her white male colleagues. Omarosa Manigault Newman, a former White House staffer, is seeking to join that suit, though she alleges only pay discrimination, not sexual misconduct.

Trump may have a lot of lawyers, but he’s been unable to bury the allegations against him. And his accusers have shown that they have lawyers too.

Meanwhile, the fates of other accused famous men have shown that there’s strength in numbers. When a few women said that Bill Cosby had sexually assaulted them, they were ignored or dismissed. But when dozens did so — and several testified at his retrial — he was sentenced to prison. When girls and women reported sexual abuse by former USA Gymnastics coach Larry Nassar, nothing happened. But when more and more began to speak publicly, with hundreds eventually testifying, he too was sentenced to prison. And the most recent phase of #MeToo began when not just one but many women, including prominent actresses, put their names to allegations against Harvey Weinstein that had often been passed around in secret.

We haven’t yet reached the point in America where a woman’s word is necessarily treated as equal to a powerful man’s. But we have reached a point where when one woman speaks out, many often rise up to join her.

So while it might indeed have been extremely risky for Carroll to speak publicly about her experience in 1995, it’s much less risky in 2019. Trump can call her a liar (indeed, he already has), but that response starts to ring more hollow the more frequently you use it. He can sic his lawyers on her, but they’re already fighting Zervos — and they’re losing.

Maybe Carroll’s account won’t change anything for Trump in 2020 or beyond. But a lot of things already had to change to make it possible for her to publish it.

And in a time when cynicism can seem like a rational response, when powerful men hang on to their positions despite what the less powerful say about them, it’s worth remembering that survivors’ words aren’t forgotten. They matter.

Biden taps Bill Burns, a career diplomat, to lead the CIA
New polls show Democrats have a narrow path to a Senate majority
A coronavirus consultant shares how she advises businesses on reopening
How ID laws can put trans people in danger
Why Scott Pruitt lasted so long at the EPA, and what finally did him in
Mike Espy wins Mississippi Senate primary