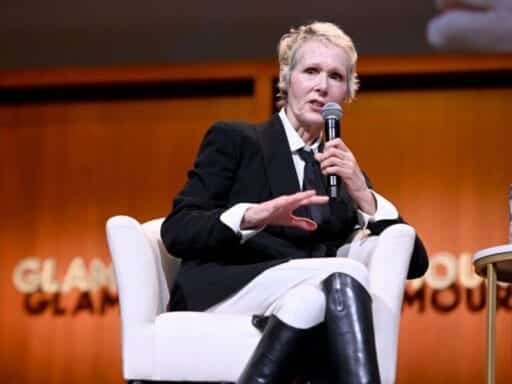 Share
Loading...
E. Jean Carroll speaks onstage during the How to Write Your Own Life panel at the 2019 Glamour Women of the Year Summit at Alice Tully Hall on November 10, 2019, in New York City. | Ilya S. Savenok/Getty Images for Glamour

Carroll was Elle’s advice columnist for 26 years. She says the magazine fired her because of Trump.

Legendary advice columnist E. Jean Carroll, who accused Donald Trump of raping her and is currently suing him, was fired from her post at Elle magazine because of Trump’s defamation, Carroll says.

“Because Trump ridiculed my reputation, laughed at my looks, & dragged me through the mud, after 26 years, ELLE fired me,” Carroll tweeted Tuesday night. “I don’t blame Elle. It was the great honor of my life writing ‘Ask E. Jean.’”

Carroll first accused Trump in her 2019 book What Do We Need Men For?, in a passage excerpted in New York magazine that went wildly viral. In the passage, Carroll wrote that Trump attacked her in the dressing room of an upscale department store sometime in the 1990s and raped her as she fought him off. Trump denied Carroll’s accusations, claiming variously that he had never met her (although there’s photographic proof that he has), that she is not his type, and that she was only trying to boost sales of her book.

In response, Carroll sued Trump. In November 2019, she filed suit against the president for defamation, arguing that Trump’s claims caused her emotional pain, reputational damage, and “substantial professional harm.” She and her lawyers have demanded a DNA sample from Trump, saying it would match DNA from the dress Carroll says she was wearing when Trump attacked her.

Now Carroll is arguing that the “substantial professional harm” of her complaint has come to include her position as the pen behind Elle’s 26-year-old “Ask E. Jean” column. In a motion filed to New York state court on Tuesday, Carroll’s attorney Roberta Kaplan included an email to Carroll from Elle managing editor Erin Hobday, sent in December, about a month after Carroll filed her suit against Trump.

In the email, Hobday references a phone conversation she had with Carroll, apparently earlier the same day. She goes on to write, “It is with deep regret that I am writing to confirm that we are terminating your contract with Elle magazine and neither party will have any further obligation to one another.” Hobday’s email cites no cause for terminating Carroll’s contract, saying only, “We and your readers so appreciate your many years of work for the magazine, and the wonderful columns you contributed to our publication. We will miss you tremendously.” Representatives from Elle did not respond to a request for comment from Vox.

“Our client filed this lawsuit to prove that Donald Trump lied about sexually assaulting her and to restore her credibility and reputation,” Kaplan said in an emailed statement to Vox. “From the very beginning, Trump has tried every tactic lawyers can think of to halt this case in its tracks and keep the truth from coming out.”

“While I can no longer hold Donald Trump accountable for assaulting me more than 20 years ago,” Carroll said when she filed her suit, “I can hold him accountable for lying about it and I fully intend to do so.”

Texas billboard tells 'liberals' to keep driving until they leave the state
Schools are using facial recognition to try to stop shootings. Here’s why they should think twice.
The trial begins for the ex-officer who shot her unarmed neighbor Botham Jean
Sacha Baron Cohen’s political provocations are exhausting and dangerous
Bryan Stevenson on how America can heal
The Trump-Cohen tape, explained