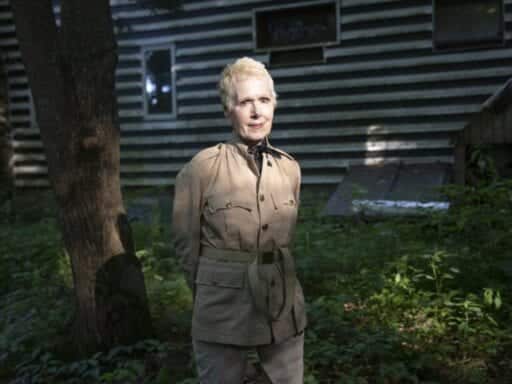 “No person in this country should be above the law — including the President,” Carroll says.

Author and advice columnist E. Jean Carroll filed a lawsuit against President Trump on Monday morning, accusing him of defamation.

Carroll wrote earlier this year that Trump had sexually assaulted her in the 1990s, forcibly penetrating her in the dressing room of a Manhattan department store. Trump said he had never met Carroll, despite a photograph published in the same piece that showed the two together, and argued that she was accusing him to boost sales of her book.

“Each of these statements was false,” Carroll says in her lawsuit. “Each of them was defamatory.”

Carroll argues that Trump’s statements damaged her reputation, and is seeking a retraction as well as punitive damages. She also says she wants the president to face justice for his words, if not for his actions.

“While I can no longer hold Donald Trump accountable for assaulting me more than twenty years ago, I can hold him accountable for lying about it and I fully intend to do so,” Carroll said in a statement to media on Monday.

The advice columnist is just one of at least 22 women who say Trump has sexually harassed, assaulted, or otherwise violated them. Trump has denied all these allegations, calling all the women liars. And Carroll is not the first to push back by suing — Summer Zervos, a former Apprentice contestant, filed a defamation suit against Trump in 2017, also arguing that Trump had damaged her reputation by calling her a liar.

Insulting the women who come forward with allegations against him has been part of Trump’s playbook since before his presidency began. Now Carroll has become the latest woman — and the best-known — to seek legal recourse for those insults. And while they may not be as high-profile as the impeachment inquiry into the president’s dealings with Ukraine, these suits could have an impact on Trump’s bid for reelection.

Carroll’s allegation against Trump first became public in June, when she wrote in New York Magazine that in 1995 or 1996, Trump had assaulted her after they ran into each other at a Bergdorf Goodman department store. The encounter began playfully, she wrote, with Trump asking her to try on lingerie for him, and her telling him that maybe he should do so instead. But when she agreed to go with him to a dressing room, she said, that changed.

“He lunges at me, pushes me against the wall, hitting my head quite badly, and puts his mouth against my lips,” Carroll wrote. Then, she wrote, he forcefully penetrated her with his penis before she was able to escape.

And he said the advice columnist was “not my type,” a response he’s employed several times to denigrate women who accuse him of sexual misconduct.

“Trump knew that these statements were false,” Carroll says in her suit, filed Monday with a New York court. “At a bare minimum, he acted with reckless disregard for their truth or falsity.”

“Carroll filed this lawsuit to obtain redress for those injuries and to demonstrate that even a man as powerful as Trump can be held accountable under the law,” the suit states.

Carroll joins Summer Zervos in filing a defamation against Trump for insults levied after an allegation of sexual misconduct. Zervos says that Trump sexually assaulted her in 2007, kissing her without her consent, touching her breast, and pressing his genitals against her. She spoke out publicly in 2016, after the Access Hollywood tape was released, showing Trump bragging about his ability to grab women “by the pussy.”

But after Zervos and others came forward with allegations, Trump said “every woman lied when they came forward to hurt my campaign.” He also specifically denied Zervos’s allegation and his campaign released a statement by her cousin arguing that she had made it for personal gain.

Zervos sued Trump for defamation in 2017 and her case has been working its way through the courts ever since. The case is currently in discovery, and last month, lawyers for Zervos filed documents arguing that Trump’s legal team was trying to improperly classify documents as “confidential” in order to keep them from being revealed as part of the suit.

For a time, some believed the discovery process in the Zervos case could lead to Trump’s impeachment — after all, President Clinton was impeached thanks to his statements during a sexual harassment lawsuit against him filed by Paula Jones. But Zervos’s suit and the more than 20 sexual misconduct allegations against Trump have faded from public view somewhat amid an impeachment inquiry dealing with his alleged attempts to pressure Ukraine into investigating former Vice President Joe Biden.

Carroll’s suit could bring those allegations back to the fore, at least to some degree. It also means Trump will potentially be tied up in not one, but two lawsuits having to do with sexual misconduct allegations leading up to his reelection campaign next year.

Of course, many women had already come forward with allegations against Trump by November 2016 — and yet he was voted in anyway. It’s not clear if things will be different in 2020.

But one thing is clear: Carroll is not going to let Americans forget about her story. “I am filing this on behalf of every woman who has ever been harassed, assaulted, silenced, or spoken up only to be shamed, fired, ridiculed and belittled,” Carroll said in her statement Monday. “No person in this country should be above the law — including the President.”