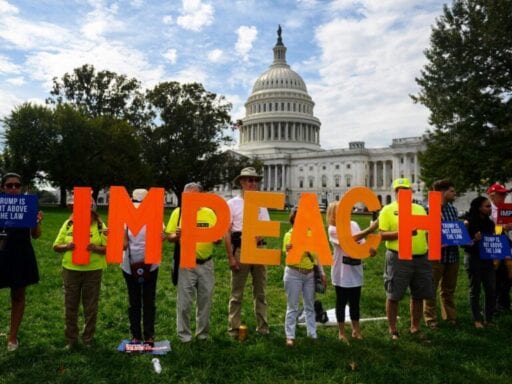 Following House Democrats’ announcement of a formal impeachment inquiry, there’s been an uptick in voter support.

Two new polls this week highlight the same trend: voter support for impeachment is growing. Both surveys were conducted amid a dizzying week of developments in Washington, including House Speaker Nancy Pelosi’s announcement of a formal impeachment inquiry as well as the emergence of a whistleblower report regarding a phone call between President Donald Trump and Ukrainian President Volodymyr Zelensky.

According to a Politico/Morning Consult poll that was conducted between September 24 and 26, support for impeachment across party lines now stands at 43 percent, an uptick from 36 percent just last week. Similarly, a HuffPost/YouGov poll, also fielded between September 24 and 26, found that the margin between those backing impeachment and those who oppose it was expanding. In this week’s survey, 47 percent supported impeachment, while 39 percent opposed it, compared to 43 percent and 41 percent that felt the same way in a previous September poll. An NPR/PBS NewsHour/Marist Poll that was held on September 25 also found that 49 percent of voters favor impeachment proceedings.

These polls, while broadly conducted before the release of the whistleblower complaint on Thursday, show a shift in public sentiment since Pelosi’s impeachment inquiry announcement earlier this week. While it’s still very early to know whether such shifts in the public mood will stick, the polls do suggest that House Democrats’ decision to move forward with the inquiry along with the new information that’s come out about the Trump-Zelensky phone call on July 25 could be altering how voters view impeachment.

In both the Politico/Morning Consult poll and the NPR survey, a majority of voters emphasized that they were keeping a close eye on the news, though the HuffPost/YouGov poll found that 42 percent of respondents hadn’t heard enough about Trump’s call with Zelensky to determine if allegations being brought against him were credible — suggesting that voters could still change their minds after they continue to learn more about the brewing scandal.

It’s worth noting that there’s a lot we still don’t know about how voters will react to an impeachment inquiry as it unfolds, and that sentiment toward it could still change significantly in either direction. As HuffPost’s Ariel Edwards-Levy emphasizes, polling on impeachment has seen wide variability based on how questions are written, and fluctuations are not always obviously attributable to a news development.

The numbers this week, however, indicate that impeachment — though still highly polarizing — could gain more support, especially if Democrats continue to unify behind the House’s newly aggressive posture and some independents and Republicans follow along.

The public’s reactions to impeachment have long been a major factor that House Democrats have cited as their rationale for avoiding the process. There have been ongoing calls for impeachment from the progressive wing of the party (Rep. Rashida Tlaib first introduced an impeachment resolution in March), but House leadership has been averse to the idea, citing potential electoral consequences.

Many Democrats, including House Speaker Nancy Pelosi, have previously viewed impeachment as so divisive that it would fire up Trump’s base for the 2020 election and potentially endanger moderate Democrats, especially those in districts that went for Trump in 2016. Others who have been in favor of impeachment have said that House leadership could make the case for impeachment, and in doing so, change public sentiment that way. This recent polling data suggests that we may be seeing the latter.

Why there’s a ring of natural disasters around the Pacific
Wuhan coronavirus outbreak: News and updates
The best $129 I ever spent: Baby formula
Why Turkey is invading Syria
Love Is Blind shouldn’t get a second season
How Trump could win in 2020