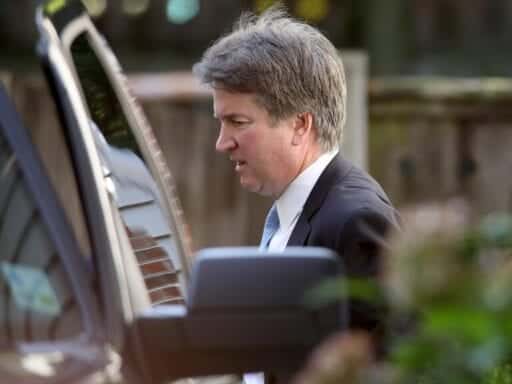 This was a “stunningly irresponsible” defense of Brett Kavanaugh.

Ed Whelan, an attorney and president of the conservative Ethics and Public Policy Center, believes he has found the person who really assaulted Christine Blasey Ford. And it wasn’t Brett Kavanaugh.

On Thursday evening, Whelan, a prominent figure in conservative political circles in Washington, set Twitter on fire by not only arguing in favor of Supreme Court nominee Kavanaugh’s innocence against Ford’s accusation that he sexually assaulted her in 1982, but also accusing someone else of being the culprit — by name, home address, floor plan, and yearbook photo.

Whelan has become one of Kavanaugh’s most prominent defenders. He became friends with Kavanaugh when Whelan served as principal deputy in the Justice Department’s Office of Legal Counsel and Kavanaugh was working in the White House counsel’s office during the George W. Bush administration.

On Tuesday, Whelan tweeted a promise: “By one week from today, I expect that Judge Kavanaugh will have been clearly vindicated on this matter. … There will be no cloud over him.” He added in another tweet: “Senator Feinstein will soon be apologizing to Judge Kavanaugh.”

By one week from today, I expect that Judge Kavanaugh will have been clearly vindicated on this matter. Specifically, I expect that compelling evidence will show his categorical denial to be truthful. There will be no cloud over him.

Senator Feinstein will soon be apologizing to Judge Kavanaugh. https://t.co/FeeuDmQNz1

The tweets caused a stir, particularly among conservatives, and even reached the White House. According to Politico, Whelan was so sure of his ability to prove Kavanaugh’s innocence that he “told at least three associates that his confidence level in his assertions is “close to 100 percent.”

But then came the Twitter thread that Whelan shared on Thursday evening. In short, using a map of homes surrounding the Columbia Country Club (near where both Ford and Kavanaugh attended high school) and floor maps available on the real estate website Zillow, Whelan argued that based on Ford’s statements of what happened that night back in 1982, the perpetrator was likely not Kavanaugh. Instead, he pointed to a classmate of Kavanaugh’s at Georgetown Prep who, in Whelan’s view, looked a lot like Kavanaugh.

Whelan’s tweetstorm was the rare set of missives that veers so close to defamation it included, at its end, a tweet specifically meant to protect Whelan from charges of defamation by suggesting Whelan was not saying what he was obviously, clearly, saying.

To be clear, I have no idea what, if anything, did or did not happen in that bedroom at the top of the stairs, and I therefore do not state, imply or insinuate that Garrett or anyone else committed the sexual assault that Ford alleges.

The response to the unsubstantiated assertions was immediate, as journalists and legal observers decried Whelan for committing what some were calling defamation, and many of Whelan’s conservative allies who had been awaiting the information Whelan promised to reveal backed away from his accusation.

A conservative writer told me that though the tweetstorm might not result in legal action, “its legality doesn’t make it proper. A private citizen simply shouldn’t be identified under those circumstances.”

A prominent DC conservative, trying to promote an alternate theory that someone else (and not Kavanaugh) may have sexually assaulted Professor Ford, named that person, showed photographs suggesting Ford confused the two and more. This is stunningly irresponsible.

When @benshapiro and @yashar have the EXACT same reaction, you know there is a serious issue brewing….. pic.twitter.com/UV5gWSCIKg

Conservative commentator Ben Shapiro, who had discussed Whelan’s promises of incoming information that would exonerate Kavanaugh on his podcast on Thursday, tweeted that Whelan might “end up in court for defaming a private figure.”

If @EdWhelanEPPC doesn’t have anything but Zillow links and Google maps and it turns out he went after a person who isn’t responsible for an alleged sexual assault 36 years ago, he’s going to end up in court for defaming a private figure.

And the Senate Judiciary Committee backed away from Whelan’s assertions.

To reporters asking: The Senate Judiciary Committee had no knowledge or involvement. https://t.co/MBmqrwMyp5

Whelan was not alone in making a “mistaken identity” argument regarding Kavanaugh’s accuser. On Monday, Sen. Orrin Hatch (R-UT) said Ford must be “mixed up” and “mistaken” about the identity of the person who allegedly assaulted her.

The Wall Street Journal editorial board made the same assertion on Monday. The Washington Post published a piece on Tuesday by opinion columnist Kathleen Parker arguing a similar line of reasoning, saying, “In a case without evidence, witnesses or corroboration, mistaken identity would provide a welcome resolution to this terrible riddle.”

In a statement to the Washington Post, Ford rejected Whelan’s speculation:

“I knew them both, and socialized with them,” Ford said, adding that she had once visited the other classmate in the hospital. “There is zero chance that I would confuse them.”

How anxiety changes political behavior
NBA legend Kobe Bryant and his daughter Gianna shared a love of the game
Trump had 5 clear chances to condemn Putin. He declined them all.
Pelosi’s State of the Union response: Rip up Trump’s speech
Activists are pressuring lawmakers to stop Amazon Ring’s police surveillance partnerships
These candidates were accused of sexual misconduct. They’re running again in 2020.