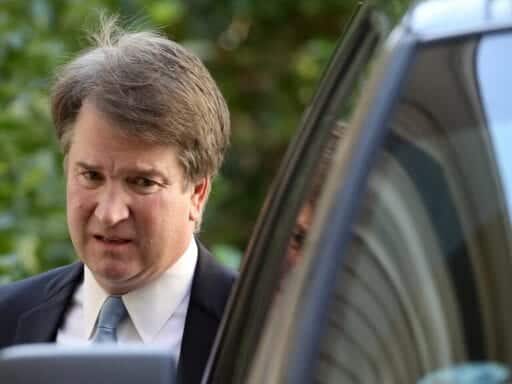 Did Brett Kavanaugh know a friend of his was planning to smear a private citizen?

On Thursday night, conservative legal operative Ed Whelan sent a series of tweets suggesting that the sexual assault allegations against Brett Kavanaugh were likely a case of mistaken identity. His evidence was that a high school classmate of Kavanaugh’s kind of looked like him, and lived in a childhood home that sounded similar to the home where Kavanaugh’s accuser, Christine Blasey Ford, described the assault taking place.

This thin evidence was quickly torn apart. Political observers from across the aisle blasted Whelan for posting the classmate’s name and photograph and strongly implying, without evidence, that he committed sexual assault. It turns out the classmate, a middle school teacher whose name I don’t want to disseminate, was someone Ford knew; she told the Washington Post that “there is zero chance that I would confuse them.”

By Friday morning, the backlash was so overwhelming that Whelan, who is currently president of the conservative Ethics & Public Policy Center, deleted his entire tweetstorm and apologized:

I made an appalling and inexcusable mistake of judgment in posting the tweet thread in a way that identified Kavanaugh’s Georgetown Prep classmate. I take full responsibility for that mistake, and I deeply apologize for it. I realize that does not undo the mistake.

This isn’t a case of a fringe conspiracy theory. Whelan is a well-connected guy in Republican legal circles with a long history of working on judicial nominations. He’s also a good friend of Kavanaugh’s and had reportedly been involved in the effort to get him confirmed. When you put these things together, it raises serious questions as to whether anyone in the White House or Congress knew about or helped coordinate the potentially libelous tweetstorm. It’s even possible that Kavanaugh himself was involved.

Whelan denied any communication with Kavanaugh or the White House about the theory — but, notably, did not mention anyone in Congress. There’s at least some circumstantial evidence that Sen. Orrin Hatch, a Republican from Utah who has supported Kavanaugh throughout the Ford saga, was looped in.

The tweetstorm was a clear attempt to defend Kavanaugh without engaging in the ugly business of calling Ford a liar. The problem, though, is that it ended up strongly suggesting that an uninvolved private citizen was a sex offender — hurting his reputation and dragging him into the spotlight without any good reason. This is in and of itself scandalous, and creates another controversy the Kavanaugh nomination can ill afford.

“The emerging consensus, which I think is right, seems to be that Ed Whelan has made things noticeably worse for [Kavanaugh],” writes Ken White, an attorney who runs the legal blog Popehat. “What a colossal failure of judgment.”

But even if this doesn’t give Republicans pause about continuing with Kavanaugh’s nomination, it’s something that ought to be investigated further.

If Kavanaugh was in any way involved in Whelan’s tweets, then it’s a serious mark against his judgment and character. People who want to serve on the nation’s highest court should not be willing to casually drag a private citizen through the mud, using dubiously legal tactics, to advance their own goals. The same goes for other people in public office, be they Senate Republicans or White House officials.

The case for investigating Whelan’s allegations

Almost immediately after the tweetstorm broke, connected observers began speculating about where Whelan’s theory came from and if he was working alone. Steve Schmidt, a longtime Republican strategist who worked on President George W. Bush’s Supreme Court nominations, was probably the most informed of these speculators:

People drown because they panic, not because they can’t swim. The Whelan email is symptomatic of the utter panic consuming a nomination that hangs by the thinnest of threads and the looming spectacle of out of touch octogenarians like Orin Hatch interrogating Dr. Ford.

When I ran the Roberts and Alito confirmations Ed Whalen was the singularly most important and effective outside advisor involved in the confirmation effort. He knew every detail when it came to our strategy and everything he did was closely coordinated with the WH effort.

He is a brilliant, meticulous and serious lawyer. He is not a conspiracy nut. It is inconceivable to me that Whelan published that email without discussions, debate and assistance from the WH and GOP Senators and staff. It is not the isolated musings of one man but rather part

Of a broader discreditation strategy. No one should presume that Kavanaugh had any knowledge of the premeditated strategy being executed on his behalf. However, if he did, it utterly and irrevocably disqualifies him as a Justice of the United States Supreme Court. I hope

There’s some evidence in the public domain backing up Schmidt’s speculation. On Tuesday, we learned that Kavanaugh had met privately with Hatch, who serves on the Judiciary Committee, and told him the accusations could be a case of mistaken identity. Whelan amplified this defense on his Twitter feed.

On Wednesday, Hatch’s spokesperson, Matt Whitlock, retweeted another Whelan tweet promoting a mistaken identity theory, telling people to “keep an eye on Ed’s tweets the next few days.” (After Whelan’s thread came out, Whitlock deleted the tweet and denied having any foreknowledge of what Whelan was planning.)

Then on Thursday evening, the Washington Post reported that the “mistaken identity” argument was a central plank of the planned Kavanaugh defense against the Ford allegations. It’s not clear in the story whether the plan was to simply say it was someone else, or to point the finger at a specific person as Whelan did:

Kavanaugh and his allies have been privately discussing a defense that would not question whether an incident involving Ford happened, but instead would raise doubts that the attacker was Kavanaugh, according to a person familiar with the discussions.

“I find this alarming,” tweeted Democratic Sen. Brian Schatz, pointing to the above paragraph in the Washington Post story.

Whelan denied any collusion with Kavanaugh, as reported by the Washington Post’s Robert Costa:

“I have not communicated at all with Don McGahn or anyone at the White House, or Judge Kavanaugh, about the topic of the Twitter thread,” @EdWhelanEPPC tells me just now, in a brief phone interview.

This statement doesn’t deny that Whelan spoke to members of Congress or their staff, and the denial of coordination with Kavanaugh and the administration is couched: All Whelan says is that he personally didn’t speak with them about it. It’s entirely possible that Hatch’s office, or some other associate of Whelan’s, looped in the White House and the nominee about the coming tweetstorm.

I say “possible” because none of this is even remotely confirmed. I don’t want to blast Whelan for lobbing allegations without evidence and then engage in the same thing myself. I have no inside knowledge to assert that any of this has actually happened.

But the fact pattern is suspicious enough that it should be investigated further. The wrongdoing here is significant, and the effects are not yet contained. On Friday morning, Fox & Friends, the president’s favorite news show, aired a segment suggesting that Whelan’s theory is plausible (though they didn’t mention his name). A piece on the fringe right pro-Trump blog Gateway Pundit, one that names Whelan’s target and credulously repeats his allegations, has nearly 35,000 Facebook shares.

Doocy: A fellow by the name of Ed Whelan .. figured out what house it may have happened at … and looked at a picture of the young man, they look a lot alike

Henry: So, is it a case of mistaken identity? pic.twitter.com/YT8XMC7zs7

This means that Whelan’s tweets, even after their deletion, could continue to do real damage to the reputation of a seemingly innocent American.

If Brett Kavanaugh knew about this and okayed it, or at least did not object, that strikes me as a serious mark against him. If Hatch or his office was involved, the voters of Utah deserve to know. If the White House was involved, the staffers responsible need to be held to account.

From top to bottom, the Whelan saga was a disaster for the Kavanaugh nomination. It’s the political equivalent of an interception (an own goal if you prefer soccer), concretely hurting the pro-Kavanaugh camp’s case.

But perhaps more importantly, it’s a potentially a story of serious wrongdoing by major government officials. There’s another cloud hanging over Kavanaugh’s nomination now, and it seems hard to justify confirming him until it’s cleared up.