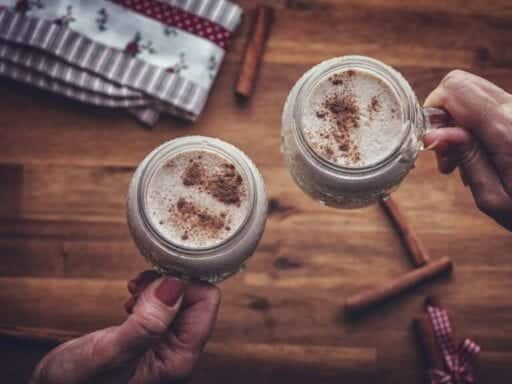 Yes, there is egg in it.

There is something deeply unsettling about the word “eggnog.” The term has an unshakable grossness, and its etymology is unknown. According to Merriam-Webster, “nog” was a “strong ale formerly brewed in Norfolk, England.” Others say it was originally a beer-like drink from East Anglia. Some people think there might be a connection to the word “noggin,” which centuries ago referred to a type of serving mug. The “egg” part is less mysterious — there are, in fact, eggs in eggnog — but the idea of drinking them seems to go against the concept of what a beverage is even supposed to be.

What we do know is that eggnog itself is a strange traditional concoction, and at some point we began to associate the drink with the holiday season.

Eggnog is made with a combination of eggs, milk or cream, and sugar.

Eggnog is made with a combination of eggs, milk or cream, and sugar. Generally, it’s served cold, and it has a custard-like color and texture. Sometimes, bourbon or whiskey or rum is added, which might be one reason it gets broken out around the holidays. Seasonal spices like cinnamon and nutmeg often get thrown in the mix as well. While none of these ingredients are that out of the ordinary, the recipe sounds more like one for cake batter than a beverage. Cooking show host Alton Brown once noted that it is very similar to ice cream, except that its alcohol content prevents it from freezing. His recipe uses a dozen eggs, a thought that makes me want to gag. Our first president, George Washington, also famously included a dozen eggs in his own recipe.

Our American notion of eggnog began as a derivative of an early century British milk drink called posset. Mexico and Puerto Rico have their own variants — rompope and coquito, respectively. Eggs, milk, and alcohol were expensive in early Britain. Food historian Frederick Opie notes that the aristocracy used to drink their eggnog warm during the cold weather, and added spices and alcohol like brandy and sherry to preserve it. In the 1700s, rum from the Caribbean was the American eggnog alcohol of choice. But it was scarce during the revolution, so it was traded out for moonshine. This might explain why it became associated with the Christmas season. It warmed up drinkers in the cold weather, and true eggnog called for expensive liquor. Families wanted to shell out a lot of money for holiday celebrations, or appear as if they had. Their flexing extended to their beverage selections.

During the holiday season, mulled wine and spiked cider flow without issue, but eggnog brings up strong feelings. In fact, US soldiers were so desperate for eggnog that they caused a riot at West Point on Christmas Eve in 1826. Their holiday party was meant to be booze-free, but they smuggled in some whiskey for the recipe and got ridiculously drunk. Things got so out of hand that 70 cadets were later arrested.

Americans have spent $185 million on eggnog (53.5 million bottles) at retail over the last 12 months, according to Nielsen data provided by the American Egg Board. Chef Heidi Fink attributes the modern decline of eggnog’s popularity to its cost and content. The fine liquor can be pricey, and eggnog has a high fat content. This might scare potential health focused drinkers away who might fear the percentage of fat. But while the American diet does actually consume more fat than in the past, we consume fewer eggs and less milk than ever before. In fact, Americans consume 42% milk than 50 years ago; in contrast, the global non-dairy industry is set to be a $38 billion business by 2024. As consumers start to steer away from dairy, eggnog will surely take a hit.

So it’s not like you’ll actually be consuming straight up yolk when you go for a carton of eggnog. Plus, most store-bought versions contain pasteurized eggs, which are heated to kill dangerous bacteria. Salmonella is always a potential risk when consuming raw eggs, but alcohol can eradicate any bacteria remaining in the eggs, so it may be even safer to drink when aged with alcohol over time. In fact, microbiologists at Rockfeller’s Laboratory of Bacterial Pathogenesis and Immunology proved that aged eggnog is safe in a 2010 experiment. They purposely added salmonella to the raw eggs used in the lab’s recipe. After about three weeks in the alcoholic concoction, the salmonella was no longer present.

Eggnog demand in the United States picks up in late October and falls off around late December. According to an article in Slate, Dean Foods produces one-third of the 130 million pounds of eggnog sold every year. (Dean Foods is the biggest supplier of milk in the US, and recently filed for bankruptcy.) The second ingredient in their “Tuscan Farms Holiday Eggnog” is high fructose corn syrup, and includes turmeric for color. It has the classic eggnog taste, but texture-wise feels a lot like drinking over-sweetened sludge.

130 million pounds of eggnog are sold every year.

The question of what to do about a beverage like eggnog in a more health-conscious world is slowly but surely being answered. SoDelicious and Silk (which are related dairy-free, plant-based brands) launched two new products this fall. The SoDelicious Coconut Holiday Nog, and Silk’s Soy Holiday Eggnog are meant to provide alternatives for the seasonal classic. As consumers gravitate more and more towards non-dairy options in general, these products have been a hit for the company. “They’re absolutely growing in popularity,” says Jennifer Michuda, a senior brand manager for SoDelicious. “We expect to continue to see double digit growth.”

Michuda says that consumers also gravitate towards their nog for the flavor difference. “What’s so important with eggnog is that creamy texture, and that’s really difficult to replicate. But coconut cream does that really well.” SoDelicious sources their coconuts from suppliers in Thailand and the Philippines. For those who can’t stand the taste of coconut, there’s the soy option from Silk.

“They come in to find our products are a great alternative to these things that they love, eggnog being one that has such an emotional and nostalgic property to it,” says Michuda. Those who want to have healthier holiday gatherings or be inclusive of vegan guests might be more likely to reach for a non-dairy eggnog if they become more available.

Dan Mader, the senior vice president of sales at Califia Farms, a non-dairy milk brand, says the popularity of seasonal non-dairy offerings is definitely expanding due to health reasons. “The big driver for us I believe is around sugar,” he told me. Eggnog typically extends into the double-digits in terms of added sugar. “We sit in kind of a unique spot in that there’s definitely health and wellness elements,” he tells me. “It’s really that attainable premium, the way that Starbucks is.”

But for those who just want a different taste of nostalgia, the future of eggnog seems to be a non-dairy one. Regardless, the wonder of eggnog remains in its bizarre decadence. There aren’t many occasions it’s considered acceptable to drink dessert. So tilt back a glass of eggnog this season, and channel the posh holiday spirit of a wealthy British aristocrat.

This study on flower resilience is the most beautiful thing I’ve read during the pandemic
Ask a Book Critic: What can I read that will make me feel better about being scared?
Live: The impeachment inquiry’s first public hearing
Google’s head of HR is stepping down, but that won’t fix the company’s internal problems
The strange and crucially important order of the Democratic primary states, explained
Trump’s catastrophic failure on testing is no joke