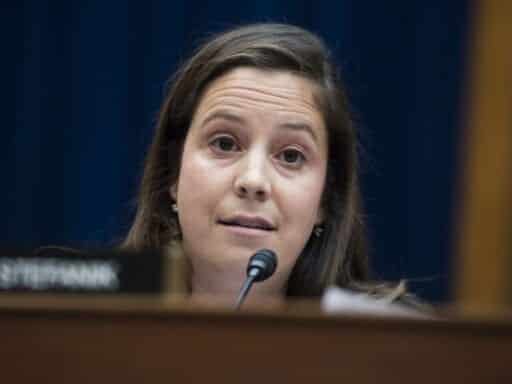 The three-term Congresswoman has emerged as Republicans’ new face of the impeachment hearings.

A “new Republican star” — and Democratic foil — is having a moment during the House Intelligence Committee’s impeachment hearings: Rep. Elise Stefanik.

Stefanik, the only Republican woman on the Intelligence Committee, has established a much higher profile this past month as she takes on a central role in the impeachment process.

Just last Friday, she made waves by using a misleading procedural stunt to accuse Intelligence Chair Adam Schiff of cutting her off — an argument that directly contradicted established House rules. During the same hearing, her pointed questioning of former Ukraine Ambassador Marie Yovanovitch stood out as far more effective than that of ranking member Devin Nunes or Republican Counsel Stephen Castor.

Since the start of the impeachment hearings, Stefanik, one of the youngest women ever elected to Congress, has become an increasingly prominent GOP figure. A longtime moderate who’s pushed back on President Donald Trump about the government shutdown and tax cuts in the past, Stefanik’s rhetoric has become more partisan as it relates to impeachment — and that’s garnered positive feedback from some factions of the party, including the president himself.

“Nothing rises to the level of impeachable offenses,” Stefanik said during a press conference last week. “This is wishful thinking by the Democrats.” Over the weekend, Trump tweeted his compliments:

Stefanik’s strong Trump backing is likely a strategic play for her reelection campaign in 2020: While New York’s 21st district previously voted for former President Barack Obama, it’s since seen a major swing in favor of the GOP and Trump in recent years.

But it’s also a sign of how polarizing this inquiry has become for both parties, Catholic University political science professor Matthew Green tells Vox. Stefanik’s stance on impeachment underscores just how closely members of the party are tying themselves to Trump during this inquiry — and sets her up as a major target for Democrats in 2020.

Stefanik is a longtime moderate, though her tone on impeachment has been more partisan

Stefanik’s recent performance has garnered widespread praise from GOP lawmakers including House Minority Leader Kevin McCarthy, and of course, the president. In the past two weeks, Trump has mentioned or retweeted posts about her eight times.

But even before the impeachment proceedings, Stefanik was viewed as a young, dynamic member of the party — one who staked out a position that’s closer to the center. Previously, she’s worked on policies such as maintaining funding for rural hospitals and boosting caregiver support for veterans.

Beyond the Intelligence panel, Stefanik currently sits on both the House Armed Services and Education and Labor committees, and she’s led the effort to elect more Republican women to the House even as other members of the party establishment have chafed against this. Last year, Stefanik urged the party to increase the diversity of its representatives and to get engaged at the primary level — clashing with other lawmakers in the process.

When fellow Republican Rep. Tom Emmer called this effort a “mistake,” she had a pointed response: “Newsflash, I wasn’t asking for permission.”

But NEWSFLASH I wasn’t asking for permission.

—>”If that’s what Elise wants to do, then that’s her call, her right…But I think that’s a mistake.”

Stefanik was first elected to Congress in 2014 at the age of 30, beating Democrat Aaron Woolf by double digits for an open seat previously held by a Democratic incumbent. Prior to her election, she worked as a staffer for former President George W. Bush’s administration and was known for her work with former Speaker Paul Ryan, leading his vice presidential debate prep.

“She had never run for office before, beat someone who had run previously and had a lot of money, and really proved her mettle and capabilities when she was a real unknown,” says Proud.

In the years since she’s taken office, Stefanik has focused her policies on the Fort Drum military base in her district, and confronted Trump on multiple issues such as his withdrawal of US troops from Syria.

Stefanik’s willingness to defend Trump during the impeachment process seems to mark a change in tone with her previous breaks, and it also underscores how partisan impeachment has become. In the vote to approve impeachment inquiry procedure, for example, not a single Republican broke with the party and voted in favor of it.

“It shows how the partisan nature of the impeachment hearings make it difficult for lawmakers of either party to take a more moderate or centrist public position,” Catholic University’s Green told Vox, adding that Stefanik’s positions reflected the support of many voters in her district.

Stefanik, meanwhile, argues that her efforts on impeachment don’t contradict her other policy positions.

“I have one of the top 10 percent most bipartisan records in this House and one of the most independent records,” she told the Washington Post. “But when it comes to constitutional matters, we should focus on the facts. We should not let this be a partisan attack the way Adam Schiff is conducting himself.”

Stefanik’s growing role in the impeachment proceedings has catalyzed an outpouring of support from Republicans, and vehement opposition from Democrats ahead of her own race for reelection in 2020.

Following Friday’s impeachment hearing, Stefanik used both social media and a press conference to defend the president and question Schiff over the committee process, even though he was simply adhering to procedure. Standing next to Jordan at the press briefing, she reiterated an argument that was founded on a misrepresentation of the rules, arguing that Republicans were “muzzled” by Schiff.

The focus on Stefanik during Friday’s hearing was also seen by some as a way to diffuse the optics of a predominately male panel scrutinizing Yovanovitch, who faced attacks from Trump during the panel, a suggestion Stefanik rejected in her interview with the Post. Nonetheless, Stefanik’s presence has highlighted how few women there are on the Republican side of the aisle.

“The obvious is that she stands out as a young woman in a party dominated by old white men,” Cook Political Report’s Dave Wasserman said of Stefanik. Democrats, though they have significantly more representation, similarly aren’t close to parity either — just three of the party’s 13 House Intelligence members are women.

Even as Stefanik’s performance in the hearing has prompted praise from conservatives, it’s simultaneously made her a target for Democrats. Wasserman notes that Stefanik is likely in a positive position for the 2020 race, since many of the voters who did not turn out in 2018 — when she won by a 14 point margin — are likely to lean Republican.

“The political reality in her district, despite what Democrats would hope, is that it has shifted in favor of Donald Trump,” he says.

Stefanik’s opponent, Tedra Cobb, meanwhile, has seen strong fundraising off of Stefanik’s ties with Trump and the impeachment inquiry. Cobb raised $1 million in the days since the Friday impeachment hearing.

.@EliseStefanik and the @GOP are using widely debunked attacks against #TeamTedra in an attempt to distract from her recent political stunts.

The spotlight on Stefanik and Cobb could direct further resources and attention from both parties to the New York race. At this time, Cook Political Report rates the district as “Solid Republican.”

A Facebook employee has broken the company’s code of silence. It’s amazing it stayed intact this lon...
Boarded-up stores are another sign of election anxiety
How Trump got suckered by Iran and North Korea
Amazon employees fear HR is targeting minority and activism groups in email monitoring program
Sen. Tim Scott on race, police reform, and why ending qualified immunity is a nonstarter for the GOP
Trump announces creation of 'Space Force'