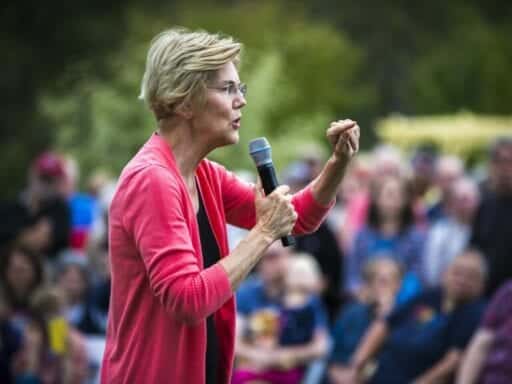 One of the most striking moments of CNN’s forum on climate change Wednesday came when moderator Chris Cuomo asked Sen. Elizabeth Warren whether the government should be able to regulate the kinds of lightbulbs people can buy.

The question was timely because the Trump administration on Wednesday undid standards for lightbulbs’ energy efficiency. But moderators also asked candidates about other individual measures: Did they support banning plastic straws? Would they tell people to eat less meat?

Warren wasn’t having any of it.

“Oh come on, give me a break,” Warren said in response to the light bulb question, in one of the breakout moments of the night. “This is exactly what the fossil fuel industry wants us to talk about. … They want to be able to stir up a lot of controversy around your lightbulbs, around your straws and around your cheeseburgers. When 70 percent of the pollution, of the carbon that we’re throwing into the air, comes from three industries.”

As The New York Times noted, the industries Warren homed in on as most directly contributing to carbon pollution were “the building industry, the electric power industry and the oil industry.”

Warren’s response speaks to how the fossil fuel industry, and other corporate giants, are eager to shift the framing of subjects like lightbulbs and paper straws, in order to put the focus on consumer choice and deflect it from the larger issue of reducing pollution.

In the case of the lightbulb rule, the framing of the Cuomo’s question seemed to center on whether the government has the right to interfere with people’s choice of lightbulb even though the original policy was focused on energy savings. As an NPR report noted, lightbulb manufacturers had lobbied against the energy-efficiency rule because it meant that consumers would have to buy fewer bulbs. Additionally, the policy was expected to significantly cut down consumers’ electricity usage.

“These corporations keep hiring the PR organizations … so we don’t look at who’s still making the big bucks off polluting our Earth,” Warren emphasized.

She went on to describe how she’d go after fossil fuel companies, who she reiterated were deeply involved in influencing policy in Washington. “The first thing we’ve got to do is we’ve got to attack this corruption head on in Washington and say enough of having the oil industry, the fossil fuel industry write all of our laws in this area,” she said.

Warren’s willingness to interrogate the premise of the question itself underscored why she’s been seen as a leader when it comes to advancing progressive policies, and confronting entrenched corporate interests.

Warren deployed a similar strategy during the second Democratic debate in July, when she shut down Rep. John Delaney’s attacks on Medicare-for-all and criticized his use of “Republican talking points.”

Her response on Wednesday was yet another example of her unwillingness to put up with such misleading framing.

Trump: Evangelicals support Israeli Embassy move more than 'the Jews'
Masks can fool facial recognition systems, but the algorithms are learning fast
“12 more years!” Trump’s opening speech got the 2020 RNC off to a dark start
After Mueller’s Russian indictments, Trump returns to a familiar line: blame Obama
Watch: A timeline of 1,944 Black Americans killed by police
Why Netflix’s fantastic new docuseries Cheer is so addictive