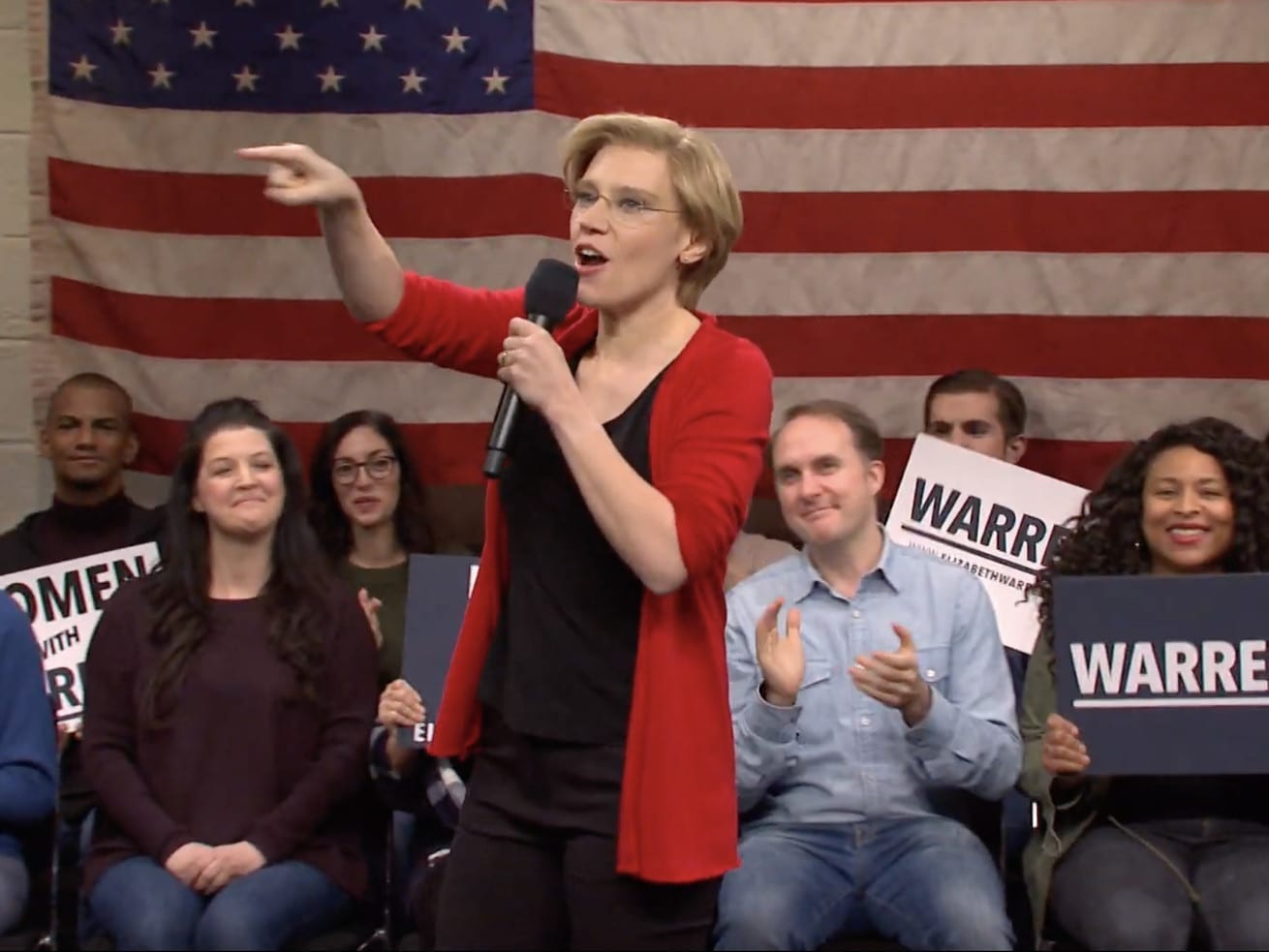 Kate McKinnon’s Warren said she released a plan to pay to Medicare-for-all because “that’s what moms do.”

The debate over the cost of Medicare-for-all took a new turn this week when Sen. Elizabeth Warren released her plan for paying for the policy.

Warren had been under pressure for some time to explain how she would fund the switch to single payer health care; at the October presidential debate, her rival Mayor Pete Buttigieg attacked her by saying, “Your signature is to have a plan for everything, except this.”

That is no longer the case, and Saturday Night Live offered its take on the plan in a cold open that had Warren wondering why other candidates haven’t faced similar questions over the costs of their health care proposals.

“I am in my natural habitat: a public school on a weekend,” McKinnon said. “And I just housed a Nature Valley bar in the hallway, so I am jacked up and ready to pipe off.”

Before she began tackling health care, McKinnon’s Warren commented on Beto O’Rourke dropping out of the presidential race. She sarcastically thanked the former congressman for calling her “punitive” ⁠— which is how he described her attitude toward the wealthy during the October debates ⁠— then gave herself a moment to gloat.

“Let me know how my dust tastes, all right?” she said.

She also took a jab at President Donald Trump’s decision to move from New York to Florida, characterizing it as an attempt to pay less taxes. McKinnon’s Warren told the crowd she’s above that: “You know where I pay my taxes? Every single state, out of principle.”

When she started taking questions from the crowd, the cold open honed in on Medicare-for-all.

Cecily Strong played a Kamala Harris campaign worker who said she was “still undecided” on who to vote for ⁠— poking at Harris’ recent staffing and budget troubles (as well as the high number of undecided Iowa voters) ⁠— asked McKinnon why it took her so long to release her plan for funding Medicare-for-all.

Responding to that question, McKinnon expressed her frustration at how she’s the only candidate being asked to figure out a funding strategy: “When Bernie was talking Medicare-for-all everyone was like ‘Oh cool!’ And then they turned to me and they said ‘Fix it, Mom!’”

Poking fun at Warren’s habit of saying “because that’s what girls do,” McKinnon said despite her frustrations, she’d crafted a funding plan because “that’s what moms do.” Her three proposals: cutting military spending, “Amazon Creep” (taxing rich people like Amazon founder Jeff Bezos), and taxing banks.

The real-life Warren’s plan is more comprehensive. She proposes gathering the bulk of the needed $20.5 trillion over 10 years by collecting money from employers purchasing healthcare, taxing the rich and corporations, and improving tax enforcement.

The next crowd member, played by Alex Moffat, asked McKinnon how her healthcare plan compares to that of Joe Biden’s. In her answer, she made a not-so-subtle jab at Biden’s lack of detailed policy.

“My plan compares favorably in that it exists. Nobody asks Biden how to pay for stuff because his plans are so vague,” she says. “No one asks how we’re going to pay for ‘Remember Obama.’”

To his credit, Biden does has a health care plan, albeit one that is not as sweeping as Warren’s. The former vice president has said his plan expands on Obamacare’s foundation by “adding a public option to Obamacare as the best way to lower costs and cover everyone.”

The final question came from Chloe Fineman, who said she is afraid to leave her current medical insurer, even though she isn’t satisfied with it. To that, McKinnon compared the insurer to a bad boyfriend: “Girl, listen to me. You need to leave him. He’s draining you. You deserve better.”

“You’re going to call him and you’re going to end it,” McKinnon continued. “And I’m going to come right over with an apple strudel and we’re going to post up on the couch and watch my favorite show, which is somehow Ballers. And then one day Blue Cross Blue Shield is going to text you from the club saying, ‘Baby I miss you.’ And you’re going to say: ‘New phone, who dis?’”

Fineman looked convinced ⁠— it seemed certain that McKinnon’s Warren had her vote locked down. Yet voters are unpredictable, and the skit ends with Fineman flippantly responding to a request for her vote by saying, “I don’t know, Pete Buttigieg seems nice.”

Twitter is considering warning users when politicians post misleading tweets
How Joe Biden plans to use executive powers to fight climate change
Trump’s new plan to tax Mexican imports, explained
Why staying cold is so important to a Covid-19 vaccine
The Supreme Court’s new decision could sink Trump’s anti-LGBTQ agenda
It took Trump 90 seconds to lie about the “Mueller report” during Michigan speech