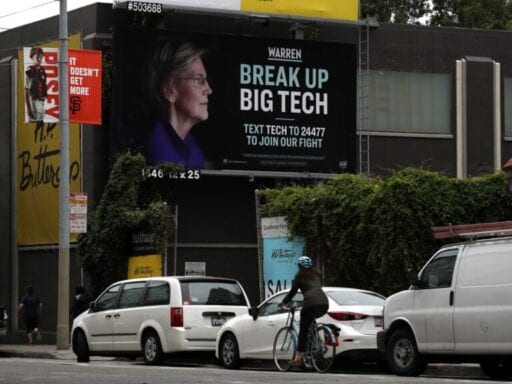 It was only a matter of time before taking Silicon Valley money became verboten.

Elizabeth Warren said Tuesday ahead of the fourth Democratic debate that she will reject campaign donations from some tech executives and investors, a first-of-its-kind move that places Silicon Valley on the same footing as sectors traditionally reviled by the left, such as the fossil fuel industry.

Warren’s announcement is one of the clearest signs yet of just how toxic tech companies have become in some quarters of the Democratic Party. Democratic candidates in 2020 have tried to steer clear of large donations from Big Oil and Big Pharma executives, and Warren — now her party’s frontrunner for the nomination — is comparing tech companies like Facebook and Google to those industries’ giants.

The candidate said she would not accept contributions to her campaign of more than $200 from “executives at big tech companies, big banks, private equity firms, or hedge funds.” That adds to a previous pledge, adopted by much of the 2020 field, to not accept money from pharmaceutical and fossil fuel officers.

The move is also a blow to the hopes of Warren’s elite fans in Silicon Valley, who are eager to mobilize their wealthy networks on her behalf but up to this point have only been able to make a personal contribution at the legal maximum: $2,800. Some have privately expressed hope that Warren’s strict position on forbidding “bundlers” — or high-dollar campaign fundraisers — would relax in the general election.

But now things are trending in the opposite direction. Warren aides reportedly say that this plan will also apply retroactively and that her campaign will actually be returning donations from people who qualify that are in excess of the $200 level, which is the threshold for a contribution to be publicly disclosed.

How each of the terms in Warren’s plan are defined will be key. What are “big tech companies”? What are “executives”? Warren’s campaign reportedly plans to cross-check past donations with publicly listed leadership teams at Apple, Amazon, Microsoft, Alphabet and/or Google, Uber, and Lyft. Warren has actually enjoyed some of the highest support in the field from employees at companies like Google, though it’s unclear how many of those donations would qualify to be returned.

Notably missing from that list are companies that are substantially bigger than Uber and Lyft, such as Oracle or Netflix, but that are not as politically divisive. And there also appears to be some wiggle room in terms of an “executive” who is not publicly listed on a company’s website under “leadership.”

Warren’s campaign did not immediately respond to a request for comment.

Also undefined are terms like “big banks” and “private equity firms.” While Warren does not specify venture capital investors — the types of people who make landmark early investments in Silicon Valley — this new prohibition could apply to them as well, depending on how Warren defines her terms.

Warren’s position makes her by far the most aggressive candidate in seeking to curtail tech’s influence on Democratic politics, rejecting an era of warm relations exemplified during the administration of Barack Obama. Many 2020 Democratic presidential candidates have followed in Obama’s footsteps and have visited the well of Silicon Valley money repeatedly during their bids.

Warren, though, obviously sees some political upside in her arrangement of raising small-dollar money while using high-dollar donors as a political foil, as well as in targeting Silicon Valley. After a leaked recording revealed that Zuckerberg saw Warren — who wants to break up companies like Facebook — as an existential threat, Warren in recent weeks has been picking fights with Facebook CEO Mark Zuckerberg and criticizing his company over its policy that allows politicians to publish misleading ads on its platform.

Why soccer players take dives
Why a second round of Covid-19 lockdowns might not be as effective
How “truth decay” is harming America’s coronavirus recovery
The Netherlands just passed a law banning face veils in public buildings
Republican candidate Corey Stewart said Trump was “standing up to the Russians.” The audience couldn...
The Supreme Court case that could transform abortion in America