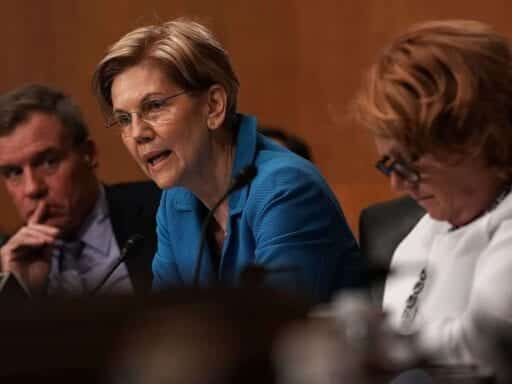 “It’s a moral stain that will follow you for the rest of your life,” she told the nominee for the consumer watchdog bureau.

Sen. Elizabeth Warren (D-MA), architect of the Consumer Financial Protection Bureau, only wanted to know one thing about President Donald Trump’s nominee to lead the consumer watchdog agency — and it had nothing to do with financial regulation.

During Kathy Kraninger’s Senate confirmation hearing Thursday, Warren asked about how she was involved in the administration’s “zero tolerance” border policy that led to the separation of more than 2,000 immigrant children from their parents in recent months. Kraninger’s portfolio as the associate director for government programs at the White House’s Office Management and Budget includes oversight of the Department of Homeland Security and the Department of Justice, the agencies that carried out the policy.

But Kraninger would only say that she had nothing to do with setting the policy and that she only participated in a few meetings about it. She wouldn’t even condemn the practice of separating children, which nearly every Republican in Congress has done.

“I will remind you, you are under oath and lying to Congress is a crime. I’ll also remind you that many of the documents I’ve requested about your role in this policy could eventually become public under the Freedom of Information Act,” Warren said. “So, let me ask again the specific question. Were you involved in developing or implementing the policies that led to children being taken away from their parents at the border?”

“Senator, it’s difficult to separate —” Kraninger said before she was cut off.

“I’ll take that as a yes, then,” Warren interrupted.

“So, as I said, I will not characterize the advice that was provided on the —”

“I didn’t ask you to characterize,” Warren cut in again. “I asked you a simple yes-or-no question. According to reports, in some cases the Trump administration isn’t sure which children belong to which parents. As of Monday, the administration had not identified the parents of 71 separated children. Which means right now they can’t be reunited. DHS is the agency which took parents away from their young children. Did you work with DHS to create a plan for eventually reuniting these children with their parents?”

Once again, Kraninger refused to talk about it. And once again, Warren repeated the question.

“I didn’t ask what the plan was or what advice you gave. Did you work with them on a plan to reunite these children who were taken away from their parents?” Warren asked.

“I understand the question, Senator, but it becomes a slippery slope in terms of characterizing the advice that was provided or the analysis or the questions that were raised —”

“No, it’s not a slippery slope. You don’t want to characterize because you don’t want to admit that you had something to do with this. You know, this was a policy that was designed to traumatize children and families as a way of scaring them away from the border. Even if they were seeking asylum, even if they were fleeing death threats, gang violence, rape, domestic abuse,” Warren said.

It was the most heated exchange in an already tense confirmation hearing.

Warren’s comments reflected the deep division between Republicans and Democrats over the future of the consumer watchdog group, which was created as part of the 2011 Dodd-Frank financial reforms during the Great Recession.

Democrats believe that the CFPB has been crucial in protecting consumers from the type of financial fraud on Wall Street that triggered the economic collapse. But Republicans say that the agency overburdens businesses and that its independent structure gives it too much unchecked power.

Trump announced plans to nominate Kraninger, 43, last month to replace acting director Mick Mulvaney, who took over the agency after Richard Cordray stepped down as director in November. Vox’s Emily Stewart neatly summed up Mulvaney attitude and legacy at the helm of the agency:

While in Congress, [Mulvaney] criticized the CFPB and in a 2014 interview slammed it as a “sick, sad” joke. As acting director, he’s taken a number of actions to reduce its scope and rein it in: He’s disbanded consumer advisory boards, scaled back sanctions on payday lenders, and even pushed to change the agency’s acronym to BCFP.

Kraninger is one of Mulvaney’s prótegés, so Democrats are worried that she will continue his attempts to weaken the agency.

On the surface, Warren’s questions about family separation seemed unrelated to the bureau’s consumer role. But Warren argued that if Kraninger was directly involved in carrying out one of the cruelest government policies toward vulnerable children, she would be unfit to protect vulnerable, working-class families from the ruthless companies that try to scam them.

“One thing consumers need in a CFPB director is someone who’s willing to stand up to powerful people on behalf of those who don’t have power,” Warren said during the hearing.

Kraninger’s nomination to lead the CFPB was already questionable — she has zero experience with consumer issues or financial regulation. But Democrats’ concerns about her lack of qualifications soon turned to concerns about morality and her capacity for cruelty.

The administration’s zero-tolerance policy to prosecute all unauthorized border crossers for illegal entry was announced by the Justice Department in May, and prompted a massive domestic and international backlash when reports began to describe how immigration agents were ripping children from their parents so that the parents could be prosecuted. A federal judge later ordered the administration to stop, and to immediately reunite the families, but it soon became clear that the federal government had no plan to do that. The agencies are still trying to track down the parents of several dozen children they haven’t been able to reunite.

It’s still unclear how involved Kraninger was in designing and implementing the policies that led to family separation. Traditionally, the Office of Management and Budget works closely with the executive branch — but the Trump White House doesn’t always follow a traditional playbook, and she hasn’t said much about her role. But she definitely had some role. After all, her job is to give policy guidance and move around resources around to carry out those policies.

But a second drama played Thursday out when Kraninger wouldn’t even say that it was wrong to separate families —something that even Trump’s allies in Congress have done (though they say the president wasn’t to blame).

“Do you think that purposefully inflicting that on innocent children is immoral?” Warren asked.

“Senator, I think there are many heart-breaking stories that appear on the news every day, from the conversation we had about American families, hard working, who are —” Kraninger responded.

“It’s a simple yes-or-no question,” Warren interrupted, growing more agitated. “Do you believe it is immoral to set up a plan whose deliberate intent is to inflict harm on children?”

“Senator, it’s not appropriate for me to provide my personal opinion and internal deliberations and discussions on this matter,” Kraninger answered.

“You see the videos of some of these children being returned to their parents after long separations,” she said. “They’re dazed, they’re unsmiling, they’re dirty. It’s like the life has been sucked out of them. These are innocent children who may be scarred forever by this policy. It is fundamentally immoral and you, you, were part of it, Miss Kraninger. It’s a moral stain that will follow you for the rest of your life. If the Senate votes to give you a big promotion after this, then it is a stain on the senators who do so.”

Then someone in the audience began playing the audio recording of children crying in their immigration cells after they were separated from their parents — audio that was obtained by journalists at ProPublica and published online last month. The children’s wails drowned out the committee chairman as he called on the next senator to question Kraninger.

Kraninger sat there with a pained, flustered expression for a few seconds before the audio was turned off. Then she regained her composure and began taking more questions.

Watch: the voices of children separated at the border

Cary Joji Fukunaga is directing the new James Bond movie. Here are 3 things to know about him.
Affordable housing is disappearing. So cities are designating parking lots to sleep in.
A little-known Silicon Valley psychiatrist has become one of the Democratic Party’s most powerful do...
Amazon told employees to delete TikTok from their phones over “security risks”
Trump’s hold of Ukraine aid was illegal, according to the US government’s top watchdog
Republican: FBI distorted witness reports in Clinton and Russia probes