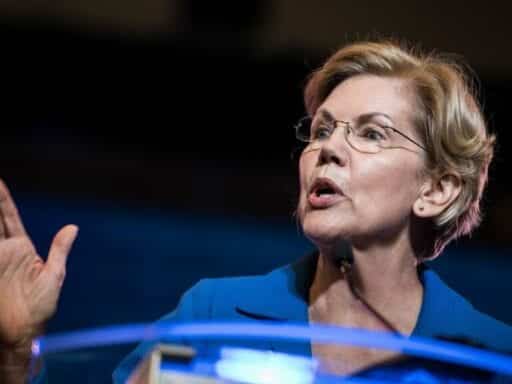 Warren is on board with a proposal, first floated by Julián Castro, to decriminalize crossing the border without papers.

While Elizabeth Warren famously has plans for everything, the Democratic senator and presidential candidate hasn’t unveiled a full immigration proposal yet. But she has endorsed the most radical immigration idea already out there in the 2020 Democratic presidential primary (ahead of her appearance in the first debate on Wednesday night): making it no longer a federal crime to cross the border and migrate to the US without papers.

In an interview with HuffPost’s Roque Planas on Tuesday, Warren said she supported repealing the provision of US law that makes “illegal entry” into the US a federal crime, which has been on the books since 1929 but has only been routinely enforced in the 21st century.

Former San Antonio mayor and Obama Housing and Urban Development secretary Julián Castro first made the idea of repealing “1325,” the provision in chapter 8 of the US code that makes illegal entry a misdemeanor, a centerpiece of his immigration platform. Warren even went a little further than Castro in saying she’d also support getting rid of the companion law that makes illegal reentry — coming back to the US without papers after deportation — a felony.

Decriminalizing migration isn’t exactly the same as opening the borders. People coming to the US without papers could still be deported if they were caught and taken before an immigration judge. But it would make unauthorized immigration purely a civil offense, instead of a criminal one.

Illegal entry has been a crime for 90 years, but only recently has prosecution for it become common

If you’re an unauthorized immigrant in the US, you’re committing a civil violation: being present in the US without a valid immigration status. That’s breaking a law, but it’s not a crime, in the same way that violating the speed limit isn’t a crime. If you’re arrested, you can be deported — a huge change to an immigrant’s life, but not technically a criminal punishment.

But if you cross the US/Mexico border between ports of entry without papers, you are committing a federal misdemeanor: illegal entry. And you can be jailed and fined in addition to getting deported.

In one respect, this system has been on the books since 1929, when illegal entry was first made a misdemeanor. But for most of the 20th century, it was kind of irrelevant. Most people who came into the US without papers weren’t tracked down and deported. Presidents generally decided that it wasn’t worth it to spend US attorneys’ time prosecuting endless misdemeanor illegal-entry cases. Those who were caught crossing the border were generally informally returned.

Under the Bush administration, however, as an independent immigration-enforcement system began to develop and mature, both civil immigration cases (in separate immigration courts) and widespread criminal illegal entry prosecutions became common.

More recently, the Trump administration’s attempts at “zero tolerance” prosecution of illegal entry were the legal basis for its widespread separation of families in 2018: Children were separated because their parents were being transferred to criminal custody for prosecution.

Under that plan, an immigrant crossing into the US without papers — whether he was seeking asylum in the US or coming for some other reason — would not be committing a federal crime. If caught by Border Patrol agents, she’d be detained for a brief amount of time, but if she didn’t raise any red flags, she’d be released into the US (with a case management system to check up on her whereabouts) pending an immigration hearing. If she didn’t qualify for some form of legal status like asylum, she’d still ultimately be ordered deported from the US.

Proposing that illegal entry no longer be a federal crime is the policy equivalent of the “no human is illegal” slogan — a way to combat hawkish attitudes toward the “rule of law” by challenging the idea that migration ought to be a matter of crime and punishment to begin with. But it’s also a key justification for reversing the past few decades of border crackdown, by unpinning immigration enforcement — at least when it comes to unauthorized immigrants themselves — from crime.

A US lawmaker says using troops against protesters will harm the military’s legitimacy
I traveled overseas to report on other health systems. Here’s what I learned.
President Trump is considering pardoning himself. I asked 15 experts if that's legal.
Facebook’s political ads policy is predictably turning out to be a disaster
FDA advisers recommend the first Covid-19 vaccine for emergency use in the US
The rise in murders in American cities, explained