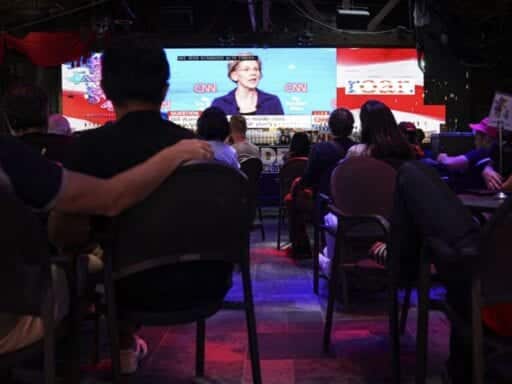 She dominated the debate and fielded attacks from the left and right.

Judging by speaking time, Sen. Elizabeth Warren certainly had the most to say — and the most attacks to respond to — at Tuesday’s Democratic debate.

Of the 12 candidates onstage at Otterbein University in Westerville, Ohio, Warren spoke the most by a decent margin, clocking in at 22 minutes of speaking time, followed by former Vice President Joe Biden, who spoke for 16 minutes. Warren’s leadership in speaking time not only indicated how much her responses dominated the debate, it also underscored her newly minted status as a frontrunner.

At the end of tonight’s #DemDebate, here’s how the candidates’ speaking time compares: Elizabeth Warren spoke the most, followed by Joe Biden and Amy Klobuchar. https://t.co/ifvRx4Ppqc pic.twitter.com/nV4BsqkPMi

The first state caucuses and primaries are still months away, so a lot could change. But in recent weeks, the Massachusetts senator has risen in the polls and is now effectively tied with former Vice President Joe Biden, according to a RealClearPolitics average.

That’s certainly a development the other candidates had noticed, heading into the October debate. Throughout it, competitors from the right and left pressed her on issues including Medicare-for-all and the implementation of a wealth tax, as Vox’s Ella Nilsen writes:

Warren and Biden are arguably the two frontrunners of the 2020 Democratic field, but it felt like Warren was getting the full brunt of her opponents’ criticism throughout much of the night. Sen. Bernie Sanders (I-VT), who is polling third behind the two, also largely escaped attacks — moderate candidates even commended him for saying his Medicare-for-all plan would raise taxes (disproportionately on the wealthy, Sanders pointed out).

As the progressive frontrunner, Warren is the most obvious target for moderates who are hesitant to go after Biden. And if she keeps rising in the polls, the attacks are likely to increase.

Warren recently narrowly pulled ahead of Biden in the RealClearPolitics average of national polls, but Biden has since reclaimed the lead. However, Warren is leading in the critical early states of Iowa and New Hampshire, while Biden has a substantial lead in South Carolina.

In addition to responding to attacks, Warren also repeatedly highlighted her leadership on policies like a universal childcare plan as well as the establishment of the Consumer Financial Protection Bureau.

Warren and Biden were trailed by Sen. Amy Klobuchar, former Rep. Beto O’Rourke, and Sen. Bernie Sanders when it came to speaking time.

Speaking time is just one measure — but according to it, Warren’s breakout as one of the top-tier candidates is looking more certain.

Apple and Google want to turn your phone into a Covid-tracking machine
Pelosi isn’t ready to impeach Trump
Trump is rescuing Maine lobstermen from himself, and blaming Obama
See bits of Halley’s comet burn up in the sky this weekend
The past 72 hours of Trump-Russia news, explained
Read the transcript of Trump’s call with Ukraine’s president