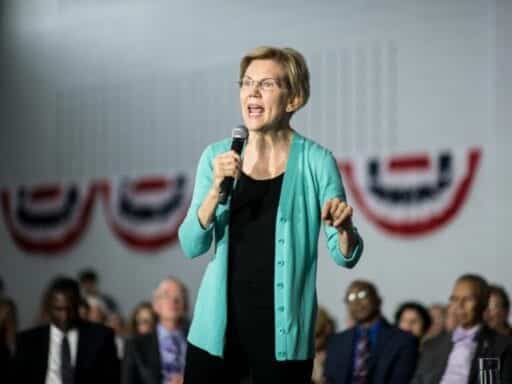 Elizabeth Warren says Americans should reject a “false choice” between public safety and making the criminal justice system less punitive — and on Tuesday she released a plan that aims to balance both those priorities.

Warren joins the other candidates who have released broad criminal justice proposals, including Joe Biden, Bernie Sanders, Cory Booker, and Amy Klobuchar. All of the plans go after a problem that has gotten more attention in both Democratic and Republican circles: America locks up more people than any other in the world, even authoritarian regimes like China, Cuba, and Russia.

And this system of mass incarceration, as groups like Black Lives Matter have pointed out, disproportionately locks up black and brown Americans.

Warren, however, does not focus solely on reducing incarceration and pulling back punitive “tough on crime” policies in her proposal, but also emphasizes some ways to combat crime and improve public safety too.

So she includes proposals to cut mandatory minimums and prison sentences in general, but also wants to reform policing to make it far more targeted on the few people at risk for violence — an approach that’s proven to reduce violent crime. She aims to end cash bail but also invest more in mental health and addiction treatment to prevent crises that can lead to crime. She promises to reel back the criminalization of so many aspects of US life (from drugs to homelessness), but also to address the root causes that might lead some people to commit crimes, use drugs, or end up homeless in the first place.

“By spending our budgets not on imprisonment but on community services that lift people up, we’ll decarcerate and make our communities safer,” Warren argues in a Medium post.

Whether that will convince Congress and states to go along with Warren’s plan, though, remains to be seen.

What Elizabeth Warren’s criminal justice reform plan would do

Warren’s plan is sweeping, covering not just the well-known concerns about incarceration that criminal justice reformers have raised but also the criticisms that America doesn’t do enough to stop crime and violence from festering on the front end.

It includes many of the policies that have become mainstays in Democratic criminal justice reform plans. She targets long prison sentences, mandatory minimums, cash bail, and drug policies focused on incarceration over addiction treatment. She argues more broadly against criminalizing homelessness, poverty, and mental health problems. She also calls for repealing the 1994 crime law, which has become a bogeyman for mass incarceration among progressives (in large part because Democrats, particularly Biden, supported it when it passed).

She lists several other policy ideas aimed at reducing incarceration and making the overall criminal justice system less punitive: establishing a clemency board to release more people from prison early, decriminalizing marijuana at the federal level, raising the age of criminal liability to 18, restricting civil forfeiture, boosting resources for public defenders, ending the death penalty, increasing oversight of police, eliminating solitary confinement, banning private prisons, and getting rid of fees for phone calls and bank transfers in prison, among other proposals.

Warren also promises to use the federal government’s funding powers to get states to reduce incarceration and reform their criminal justice systems. This is key to reducing incarceration: About 88 percent of people in prison are held at the state level, while 12 percent are at the federal level. (And, crucially, while about half of federal prisoners are in for drug offenses, the majority of state prisoners are in for violent crimes.)

Warren does include a few exceptions in her push to decarcerate, particularly executives whose companies are linked to crimes, including financial institutions and opioid painkiller makers.

Warren also focuses much of her plan on essentially preventing the need for prison — by taking steps to prevent crime and violence in the first place. She would encourage more targeted police strategies, such as “focused deterrence,” that focus on the few people at risk for violence and crime. She points to her gun violence plan, which promises stronger gun laws. She would dedicate more resources to schools with the goal of keeping children in school and engaged. She cites several ideas to address problems that can contribute to higher crime, from mental health issues to drug addiction to unaffordable housing.

The question is how likely any of this is to happen. For one, getting real reform across the US will require cities and states to come on board, since that’s where most incarceration and policing happens. But state governments, for example, have refused federal incentives for criminal justice reform in the past, typically adopting the policies only if they had prior interest. The same could happen under a Warren administration, especially in Republican-controlled cities or states.

Another question is if these ideas could really get congressional approval. While Warren could do some of them alone, much of her plan would require congressional action. Given that Congress took years of negotiations to pass a fairly mild criminal justice reform bill in the First Step Act, it’s unlikely the House and Senate will do anything as sweeping as what Warren is proposing anytime soon. That’s especially true if Warren spends time and political capital on some of her many other proposals, reducing the possibility that Congress even gets to sweeping criminal justice reform at all.

If nothing else, though, the plan helps establish Warren, who’s spent much of her career on issues unrelated to criminal justice, as someone who is taking the calls for reform seriously.

At the core of Warren’s plan is the claim that punitive criminal justice policies aren’t needed to make America safer. Based on the research, she’s right.

Another huge review of the research, released in 2017 by David Roodman of the Open Philanthropy Project, found that releasing people from prison earlier doesn’t lead to more crime and that holding people in prison longer may actually increase crime.

That conclusion matches what other researchers have found in this area. As the National Institute of Justice concluded in 2016, “Research has found evidence that prison can exacerbate, not reduce, recidivism. Prisons themselves may be schools for learning to commit crimes.”

Similarly, other research suggests that more aggressive policing strategies, such as stop-and-frisk, don’t significantly reduce crime (although by disproportionately hassling black and brown communities, they do reduce faith in police among minority neighborhoods). In fact, recent studies indicate that more targeted policing approaches, when coupled with social service programs and public health interventions in a way that fixates on the very few individuals at risk of violence, are much more effective for combating crime and murders.

To this end, a recent report by the Brennan Center for Justice concluded, “Between 2007 and 2017, 34 states reduced both imprisonment and crime rates simultaneously, showing clearly that reducing mass incarceration does not come at the cost of public safety.” Other places that have pulled back aggressive policing and criminal justice policies, such as New York City after it halted stop-and-frisk, have seen crime continue to drop.

Since most incarceration happens at the local and state level, it’s unclear just how much Warren, as president, could do to combat mass incarceration.

Yet a constant worry in the criminal justice reform space is what would happen if, say, the crime rate started to rise once again. If that were to happen, there could be pressure on lawmakers — and it’d at least be easier for them — to go back to “tough on crime” views, framing more aggressive policing and higher incarceration rates in a favorable way.

Warren’s plan suggests she wouldn’t call for more incarceration. Even if her plan doesn’t pass Congress, that’s still a meaningful shift from the punitive politics of the ’80s and ’90s.

How long it could take to count the vote this year, explained
Alex Jones blames “psychosis” for his Sandy Hook conspiracies
Vox Sentences: “Always under audit”
How a CNN graphic sparked the #YangMediaBlackout controversy online
Songs to wash your hands by: Memes are an unexpected ally in the fight against coronavirus
The first Democratic debate qualification rules — and controversies — explained