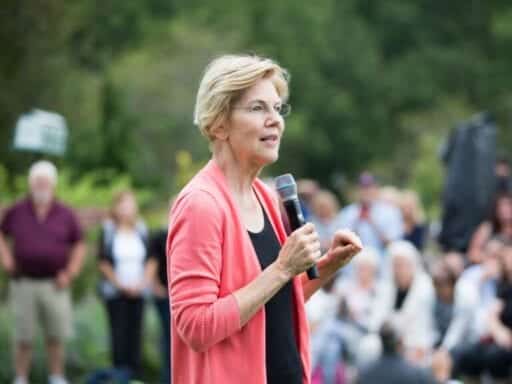 Share
Loading...
Senator and Democratic presidential candidate Elizabeth Warren speaks to a crowd of around 800 during a Labor Day house party on September 2. | Scott Eisen/Getty Images

Warren’s bold plan to crack down on corruption in Washington, explained.

Sen. Elizabeth Warren (D-MA) is expanding the first major piece of legislation she’d try to pass through Congress if elected president: a vast anti-corruption package to crack down on the entrenched culture of lobbying in Washington, DC.

Warren’s plan, first released in September, is an update of a bill she released back in August 2018, well before she announced her campaign for president. She’s been clear it would be the first major legislative priority of a Warren administration — and she’s been gradually updating it ever since. Warren believes the flow of money in politics has stalled progress on a number of other issues, including gun violence, climate change, and the rising cost of health care. Stamping money out of politics goes to the root of these issues, she says.

“The rich and the powerful have been calling the shots in Washington forever and ever and ever it feels like,” Warren told Vox’s Ezra Klein in June. “They’re not going to just say, ‘Oh, well, okay. Now you need a wealth tax. Now you want to make these other investments.’ … I think going straight up the middle on the corruption plan is the first one. Knock them back, and while they’re all scrambling, then start passing the rest of it.”

In other words, Warren’s anti-corruption plan is her legislative cornerstone. If elected president, she’d have plenty of buy-in from the Democratic-controlled House, which passed a similar, sweeping anti-corruption and pro-democracy reform bill known as HR 1 as its first priority after retaking the gavel in 2018. Democrats have a decent chance to retain control of the House in 2020, but flipping the Republican-controlled Senate will be much more difficult.

The main planks of Warren’s updated anti-corruption plan are similar to the bill she released last year, but there are several major updates, including banning forced arbitration clauses and class action waivers for all employment, consumer protection, antitrust, and civil rights cases. The most recent update tightens ethics rules for judges, and gives judges less leeway to personally decide whether or not they can recuse themselves on certain cases.

“On issue after issue, widely popular policies are stymied because giant corporations and billionaires who don’t want to pay taxes or follow any rules use their money and influence to stand in the way of big, structural change,” Warren writes in her plan. “We’ve got to call that out for what it is: corruption, plain and simple.”

Warren’s most recent anti-corruption plan contains nearly 100 proposals to change how lobbying works in all three branches of government: executive, legislative, and judicial. It’s modeled after the Anti-Corruption and Public Integrity Act she introduced last summer but contains some major changes.

Here are the key points of Warren’s plan:

Many previous attempts to pass anti-corruption laws have focused on Congress or the executive branch, but Warren’s plan would up transparency requirements for the judicial branch as well. She’d extend the code of conduct for federal judges to those on the US Supreme Court (they’re currently exempt). Warren’s plan would also make it so that federal judges under investigation couldn’t escape inquiries by stepping down from their posts.

“Our federal court system only works if the American people have faith that it is neutrally dispensing fair-minded justice without bias or personal interests interfering in judicial decisions,” Warren said. “If we want the American people to believe this, we need some serious judicial ethics reforms.”

House Democrats passed a similar plan at the start of the year. Senate Republicans oppose it.

Warren investing her political capital in an anti-corruption plan is a smart move for one big reason: House Democrats passed a similar plan earlier this year and are eager to see it signed into law.

House Democrats made a sweeping anti-corruption bill, known as HR 1, their top priority when they came into power after the 2018 midterms. The main difference between HR 1 and Warren’s plan is the House Democrats’ bill contains a raft of pro-democracy reforms that would expand voting rights as well as strengthen ethics laws. HR 1 also contained a plan for public campaign finance reform — while Warren voices support for that in her anti-corruption proposal, she also says rooting out corruption must be the beginning of structural change.

But if Warren were elected president and House Democrats hung onto their majority in 2020, she’d have a willing partner to try to get this legislation passed. Of course, the bill’s future would depend on whether Democrats could also take back the Senate; current Senate Majority Leader Mitch McConnell has vowed to be the “grim reaper” of HR 1 as well as a number of other Democratic policy priorities.

Warren may be able to enact some of these changes through executive action. But in order to enact as broad a plan as she envisions — one that touches all three branches of government — she’d need buy-in from the House and Senate.

Cracking down on corruption is also a savvy political move; a poll of battleground House Districts by PAC End Citizens United shows House Democrats’ anti-corruption plan is politically popular, and not just among Democratic voters. The poll found an overwhelming number of independent voters — 75 percent — said cleaning up corruption was a very important issue, the most compared to any other issue polled.

The organization’s survey found that 75 percent of 2018 voters in battleground House districts said cracking down on Washington corruption was their top priority, followed by 71 percent who wanted to protect Social Security and Medicare, and 70 percent who listed growing the economy and jobs.

Warren started early presenting herself as a candidate free of moneyed influence; she hasn’t participated in high-dollar, closed-door fundraising, choosing to fundraise largely from grassroots donations.

Obviously, she still has to get through a competitive Democratic presidential primary. But if Warren makes it to the general election, she’ll have a clear contrast between herself and President Donald Trump, a scandal-ridden incumbent who embodies much of the corruption she’s railing against.

Jeffrey Epstein used MIT to launder his image. It’s a lesson for the #MeToo era.
“They just see that you’re Asian and you are horrible”: How the pandemic is triggering racist attack...
What to expect at the fourth Democratic debate
Live results for Mississippi’s governor’s race: Jim Hood vs. Tate Reeves
How Obamacare helped millions who lost their jobs during Covid-19, in 3 charts
The $15 minimum wage bill has all but died in the Senate