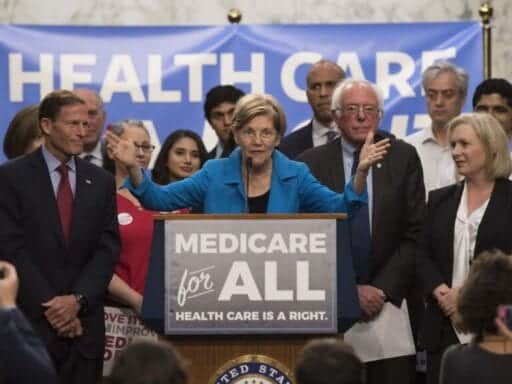 What Elizabeth Warren would do on health care in her first 100 days as president.

In her new health care agenda for the first 100 days of her presidency, Sen. Elizabeth Warren (D-MA) makes a tacit concession: The health care plan Democrats are most likely to pass in the near term is a robust public option.

Warren rolled out a laundry list of health care executive actions on Friday that she said she plans to take in her first few months as president, making her the first Democratic candidate to offer such a robust administrative playbook.

She also laid out her plan to get to Medicare-for-all, beginning with passing a bill at the start of her presidency that would create a new government health plan that would cover children and people with lower incomes for free, while allowing others to join the plan if they choose. It’s a particularly expansive version of a public option.

Only later, in her third year in the White House, does Warren say she would pursue Medicare-for-all legislation that would actually prohibit private health insurance, as would be required for the single-payer program that she says she, like Bernie Sanders, wants.

As Warren competes with not only Sanders on the left but Joe Biden and Pete Buttigieg toward the center for the Democratic nomination, the plan seems like a bit of triangulation on her part. She isn’t backing off her commitment to Medicare-for-all single-payer. But she is putting out a plan that she will argue is more likely to actually pass 18 months from now.

Either bill in Warren’s two-step plan would face serious challenges: The first requires 50 or so Senate Democrats to agree on a health care plan in early 2021 and then the second even more audaciously needs a Senate supermajority to approve single-payer health care (or an end to the Senate filibuster).

This won’t win over many Sanders supporters, who see an unnecessary focus on tactics over strategy. The moderates will still assail her plan as unrealistic and politically toxic. Warren, meanwhile, will make the case she has a plan to both pay for and pass Medicare-for-all.

Health care didn’t seem like the senator’s top priority earlier in the campaign when she spent more time touting the anti-corruption bill she says would be her No. 1 legislative item. But she is now committing to passing a significant health care bill early in her presidency.

Warren starts by saying she would push a Democratically controlled Congress to pass a Medicare public option in the first 100 days of her presidency.

The new government insurance plan would immediately cover all children under 18 and every American with an income below 200 percent of the federal poverty level (about $25,000 for an individual, $51,500 for a family of four) with no premiums or cost-sharing. The uninsured and people eligible for free coverage would be automatically enrolled. There would be an opportunity to opt out. At the same time, Americans over 50 would also be eligible to enroll in the existing Medicare program, with new limits on their cost-sharing.

Other Americans, including the 160 million people who get insurance through their work, could choose to join the public option if they wish. For people who did choose to enroll in the government plan, their employer would need to pay a contribution to help cover the cost. People with incomes above 200 percent of the poverty level would be asked to pay premiums (capped at 5 percent of income) and they would have to pay some money out of pocket for medical care; the government plan would cover 90 percent of costs.

In its structure, the Warren public option shares some features with Joe Biden and Pete Buttigieg’s (automatic enrollment for the uninsured, buy-in option for workers, etc.), but its benefits are more generous.

Warren says that, over time, premiums and cost-sharing for the government plan would be reduced to zero, though she doesn’t provide a timeline for doing so. This is a key tenet of Medicare-for-all as written by Sanders and previously endorsed by Warren: no cost-sharing or means-tested premiums.

Her proposed legislation would also expand Obamacare’s existing tax subsidies for private insurance and would allow people who work at larger firms, who are currently ineligible for that assistance, to take advantage of it and buy subsidized private insurance on the law’s marketplaces if they decline workplace coverage.

So in the short term, Warren’s legislation as outlined here would create a government backstop plan for the uninsured and certain vulnerable populations (kids, the poor, the near-poor) that also competes alongside private insurance for working people with higher incomes. She leaves the institution of single-payer, without private insurance, for another bill that she says she’ll pursue before the end of her first term.

The two-step approach — instead of one bill with a transition period, as Sanders has written — is an attempt to navigate Senate rules and Senate politics.

First, if Democrats manage to win a majority in 2020, it will be a slim one. They could theoretically eliminate the filibuster, but a lot of senators sound reluctant to do that. So any major legislation would likely need to be passed through the budget reconciliation process, which allows a bill to move with just 51 votes but restricts what policies can be included to provisions that directly affect federal spending and revenue. Some provisions of Medicare-for-all, like the prohibition on private insurance, are not thought to be permissible under reconciliation.

And to pass a reconciliation bill with a slim majority, Democrats will need basically every single one of their members to support it. There would be a significant bloc of moderate Democratic senators — led by the likes of Sens. Joe Manchin (D-WV) and Kyrsten Sinema (D-AZ) — who would need to back whatever health care bill President Warren is trying to pass. Those lawmakers have already said they don’t support Medicare-for-all, but they might be more amenable to the public option that Warren is suggesting as a starting point.

But if there is one place that Democrats do all agree on health care, it’s that they think Americans, if given the chance to have government health care, will really come to like it. Sanders says that’s why people will ultimately be happy to give up their private plan and why Pete Buttigieg says he believes a buy-in can be the start of the path to single-payer.

That would defy the recent history of health care reform where parties that pass or even just pursue major changes to US health care pay dearly in the next election, as they did in 1994, 2010, and 2018. But the assumption is baked into each of their plans in a different way.

All the health care executive actions Warren wants to take

Warren’s plan also broadens her health care agenda beyond Medicare-for-all, the dominant primary debate so far but only a dream if Democrats don’t win the Senate and Mitch McConnell controls the Senate agenda.

In that case, the new Democratic president would be mostly dependent on their administrative power to change health care policy. Warren also detailed her roadmap for executive action, a mix of reversing Trump administration actions and taking her own steps to, in particular, reduce prescription drug and other health care costs.

She says she would:

Warren’s plan here attempts to both finish answering the tough questions about Medicare-for-all (how do you pass it?) and broaden the health care conversation (she also proposes a $100 billion increase in NIH research funding). Health care had become a vulnerable spot in her wonky armor and, mindful of her “plans” reputation, she is moving to repair it.

Joe Biden just launched the second war on poverty
Theresa May is on a doomed mission to renegotiate Brexit
The fight over letting Texans under age 65 vote by mail, explained
Sharp Objects’ shocking credits scenes — and what they reveal about the killer — explained
5 top 2020 Democrats vow to reverse Trump’s new landmine policy
America’s child care problem is an economic problem