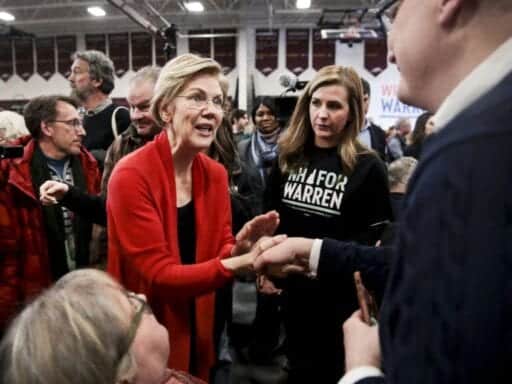 She’s badly in need of a New Hampshire surprise.

What happened to Elizabeth Warren?

The big politics story of the spring and summer of 2019 was Warren’s relentless rise in the polls. Throughout May, June, July, and August, her numbers got better and better. By mid-October, she had nearly caught Joe Biden.

And with Warren disproportionately strong in the early states of Iowa and New Hampshire, she seemed well positioned to land a one-two punch, get a bounce to put her above Biden in national polls, knock Bernie Sanders out of the race and pick up most of his supporters, and become the Democratic nominee.

But now, on the day of New Hampshire’s primary, she’s locked in a battle with Biden over who will finish third and who will finish fourth. And unlike Biden, who is counting on a South Carolina “firewall” to revive his campaign, she doesn’t have a backstop state.

If she beats poll-based expectations and unexpectedly does well in New Hampshire Tuesday night, she could bounce back. Her candidacy, after all, retains a lot of the underlying strength that made her a frontrunner in October. But if she doesn’t, this could be the end of the road for her, and that’s left a lot of people puzzling over what exactly happened.

Stuck in the middle

The key to Warren’s rise, and her fall, is that she’s a left-winger who’s better-liked in Washington circles than Bernie Sanders.

Warren speaks the language of policy wonks and think tankers. She was a major intellectual leader among congressional progressives during President Obama’s second term. She’s worked closely with the leaders of major labor unions. And she has well-established ties with the progressive press. She also appeals to many Hillary Clinton fans who were genuinely enthusiastic about the prospect of electing a woman president in 2016.

Many people thought of her, in other words, as a more acceptable face of Sanders-style politics. Before 2016, that group included Sanders himself. Many progressive leaders were trying to draft Warren into challenging Clinton, and Sanders has said he would have happily stood aside in Warren’s favor back then.

Early in this cycle, meanwhile, many people were hoping that in 2020 progressives could run that same play again — Warren for president, with the enthusiastic support of Sanders. Warren is younger than Sanders, is a formal member of the Democratic Party, doesn’t call herself a socialist, and would break barriers as the first woman president — bringing the Sanders base together with the more progressive elements of Clinton’s base to win the nomination.

But it didn’t work out that way. To Sanders and his core fans, the 2016 primary was an era-defining political moment. The fact that Warren not only didn’t run but also didn’t endorse Sanders was a sign that she lacked the stomach to challenge the establishment. So Sanders hopped into the race and began to lay out a platform that was considerably more ambitious and left-wing than his own 2016-vintage platform, opening up clear space to Warren’s left. To mainstream Democrats, meanwhile, Warren’s brand of politics remained unacceptably left-wing. So rather than running as the champion of the left or as a Stop Bernie candidate, she was left to fight a two-front war.

Warren has been hobbled by electability concerns

From the get-go, Warren’s campaign has been somewhat hobbled by worries about her “electability.”

Some of this goes back to the reality that she is a woman. One interpretation of Clinton’s electoral defeat in 2016 — an interpretation encouraged by Clinton and some members of her senior staff — is that she was done in by sexism in the media and the electorate. Calling out misogyny was supposed to be a feminist act, but it also served to broadcast the message that if you’re serious about beating Trump, you should nominate a man.

There is also the reality that, as Vox’s Ella Nilsen has explored in detail, even as Warren secured a national reputation, her approval ratings in Massachusetts were fairly weak. In both 2012 and 2018, she ran weaker than you’d expect based on the underlying partisan fundamentals.

Moderate Democrats were also worried that left-wing ideas would be politically toxic in a general election. But something that’s been particularly harmful to Warren is the evidence that, issues aside, she does worse than Sanders in head-to-head matchups with Trump.

My Warren theory: a significant (and negative) turning point for her was the release of the @UpshotNYT/Siena poll showing her doing worse vs. Trump than Biden/Sanders in six critical states.

Who made up Warren’s base? Empirically-minded @nytimes readers desperate to beat Trump.

Similarly, Sanders, unlike Warren, is more popular in Vermont than an average Democrat and runs stronger in his blue home state than Democratic Party presidential tickets.

These electability concerns naturally complicated her implicit party unity pitch. Nobody loves the idea of settling for their second choice, and the fact that she was doing worse in the polls than either Biden or Sanders gave both moderates and leftists good reason to reject compromise.

As Warren reached her October polling peak, she also faced a crescendo of criticism from the right over her support for Medicare-for-all.

The argument was that she’s failed to offer any kind of account of how this massive government program would be financed. Warren’s first instinct was to copy Sanders in eschewing details while simply making the case that aggregate health care costs would be lower. But this seemed to conflict with her “Warren has a plan for that” pitch, which led her to release a semi-detailed plan on November 1 that she characterized as featuring no tax increases on the middle class.

Already trending somewhat down in the polls by that point, the rollout didn’t achieve what it was supposed to. Rather than consolidating left-wing support behind her as the one true progressive choice, it opened her up to criticism from the Sanders camp that the employer fees she was counting on were an inferior financing mechanism to a payroll tax or something else more straightforward.

It’s unlikely these criticisms had any direct influence on the course of the race, but Warren advisers do think they had a secondary impact by influencing her media coverage. Rather than happy plan rollout stories, they got coverage emphasizing the idea that Warren was besieged by critics on all sides. The fact that criticism from left-wing publications like Jacobin and Current Affairs (which wrote “the prospect of an Elizabeth Warren nomination should be very worrying” at a time when she was second in the polls to Biden’s first, with Sanders a distant third) and related Sanders-friendly Twitter circles only intensified when Warren looked like she might win also sent a powerful signal to the establishment: Settling for Warren wasn’t going to earn them credibility on the left, so why settle?

Then on November 15, Warren attempted a tactical retreat by releasing a “transition strategy” for Medicare-for-all, suggesting she would aim for public option legislation early in her administration and save the full M4A push for later. At that point, it only exacerbated doubts about Warren on the left without resolving any concerns in the center.

Throughout the three phases of her positioning on this, Warren struggled to articulate what I take to be her real view — that single-payer health care is a good idea, but the smarter governance strategy is to focus on anti-corruption efforts rather than health care. Perhaps frontloading the tactical argument earlier would have worked better. Or perhaps there was nothing she could have done. Either way, what wound up happening is that a candidate who was probably the choice of the median Democrat took fire from all sides and started bleeding support in multiple directions.

A lot of college grads are Warren fans

It’s also worth saying that while Warren is currently in third place in the Economist national polling average, she’s still in first place nationally with Democrats who’ve graduated from college and with white Democrats. So if you don’t live in an early primary state and your social circle consists primarily of college graduates, the odds are that you know a lot of Warren supporters.

There’s also evidence that across all demographic groups, people who pay close attention to the news like Warren better. In other words, an inclination to read this article probably correlates with an inclination to like Warren. So if you feel like the media’s increasing pessimism about her chances is out of step with your personal experience of the world, it’s very possible that your personal experience is just unrepresentative.

Still, while her odds of winning the nomination look low right now, an upside surprise in New Hampshire could swiftly change that.

She retains the considerable advantage that leftists see her as superior to the rest of the non-Sanders field, while most of the establishment likes her better than they like Bernie. That’s the kind of candidacy that can easily benefit from a little momentum. But for now the momentum is mostly moving in the other direction, and her campaign is running out of time.

Live results for the Delaware state primary
Why “the whole environment in Hollywood had to change” for Harriet to get made
Vox Sentences: The Supreme Court decides not to decide on gerrymandering
WandaVision’s big nod toward an MCU multiverse, explained
“My heart cries”: For one Rohingya refugee, a dream of home that may never be fulfilled
4 ideas to replace traditional police officers