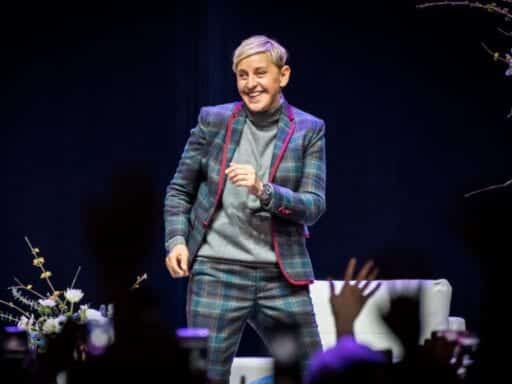 Ellen built her brand on being nice to anyone, even George W. Bush. That brand might not be viable now.

On Sunday, Ellen DeGeneres spent her afternoon in a luxury box at a football game in Texas, watching the Dallas Cowboys play the Green Bay Packers and laughing cheerfully next to former president George W. Bush. The TV cameras panned over the pair sitting together, apparently in the midst of a friendly exchange, and on social media, people erupted into outrage.

Ellen is a trailblazer who taught middle America not to be afraid of lesbians. Most famously, she came out of the closet in 1997 while still the star of a primetime network sitcom, and weathered both the ensuing controversy and her show’s cancellation to survive and thrive in Hollywood.

George W. Bush is the architect of the Iraq War who built a large part of his appeal on the idea that middle America should absolutely be afraid of lesbians. Notably, he supported a constitutional amendment that would have defined marriage as a union between one man and one woman, and he opposed classifying crimes against gay people as hate crimes. So what, asked progressive observers, was Ellen doing palling around with Bush?

Liberals have literally rehabilitated George Bush from the war criminal that killed over one million Iraqis based on lies, to the man that passes Michelle Obama candy, and hangs out with Ellen DeGeneres on weekends.

On her talk show on Monday, Ellen presented a very Ellen-branded defense of her actions to those she described as “people who were mad.” She was, she told her audience, just being kind.

“I’m friends with George Bush. In fact, I’m friends with a lot of people who don’t share the same beliefs that I have,” Ellen said, during a segment that ran nearly four minutes long. She noted that while she personally is anti-fur, plenty of her friends wear furs.

“Just because I don’t agree with someone on everything doesn’t mean that I’m not going to be friends with them,” Ellen concluded. “When I say, ‘Be kind to one another,’ I don’t mean only the people that think the same way that you do. I mean, ‘Be kind to everyone, it doesn’t matter.’”

You can watch the whole clip below:

Yes, that was me at the Cowboys game with George W. Bush over the weekend. Here’s the whole story. pic.twitter.com/AYiwY5gTIS

That’s the kind of speech Ellen has been making for most of the time that she’s been famous. The whole Ellen DeGeneres thing is performative kindness — or, more specifically, niceness — that can be directed at anybody.

Despite persistent tabloid rumors that Ellen is not particularly nice to work with, once the cameras are rolling, any kind of celebrity can drop by Ellen’s talk show — politicians, actors, viral YouTube stars — and she’ll be aggressively nice, beaming and sunny and joyous, until her guest reflects Ellen’s sunniness back out to the audience and they, too, appear to be nice. That’s why Ellen the TV show exists: to make celebrity guests look good, and to let audience bask in that goodness, in the name of entertainment.

In that context, Ellen’s friendship with Bush might appear to be more of the same: more of the niceness that she is famous for performing at all of her guests, no matter who they are. And a few years ago, she might have been able to use her brand to sway public opinion to her side. But in 2019, Ellen’s niceness is no longer playing to her audience as an unalloyed good.

In our current political moment, niceness no longer appears to be a cure-all. And uncritical niceness may no longer be a viable brand, even for someone as good at wielding it as Ellen is.

For some people, Ellen’s friendship with Bush is a betrayal of her legacy as a lesbian icon

While Ellen’s “be kind” speech was met with plenty of support from fellow celebrities on social media (“Thank you for this important reminder, Ellen!” tweeted Reese Witherspoon), many of the civilians in the room were less than convinced by her logic.

“Being nice to Bush means in turn disrespecting those whose lives were destroyed by his disastrous administration,” wrote Naomi LaChance at Splinter News. “You literally cannot be kind to everyone. You have to choose a side! Ellen certainly has.”

“DeGeneres betrays her political significance as an openly gay entertainer and a prominent LGBTQ advocate through her friendship with Bush,” wrote Justin Charity at the Ringer.

“When one person has historically believed other people should not have the same basic rights as another, it’s hard to treat these differences as benign—especially when that person once exercised their power to help make their beliefs a reality,” wrote Laura Bradley at Vanity Fair.

Ellen weathered a similar controversy earlier this year. After Kevin Hart stepped down from hosting the Oscars in the midst of outrage over some of his old homophobic jokes, Ellen brought him onto her show and urged him to ignore “the haters.”

“Don’t let those people win — host the Oscars,” she told him. She announced that she had already called the Film Academy to pledge her support to Hart.

“DeGeneres could have shared her platform with dozens of other comedians in the queer community instead of allowing Hart to further a narrative in which he is the victim (rather than the people he referred to [using a homophobic slur] over and over online),” wrote Bridget Read at Vogue.

“Both DeGeneres and Hart, in this conversation, were in positions of power to create a tangible change in our culture about responsibility, liability, humor, acceptance, and harm,” wrote Kevin Fallon at the Daily Beast. “It should have been the teaching moment so many were waiting for. How is it possible then that they both made the situation worse?”

Ellen’s pleas for Hart went unheard by the Academy Powers That Be, and the 2019 Oscars went forward with no host at all. Her formidable ability to reflect her own niceness and good reputation onto a problematic celebrity and rehabilitate them through her endorsement had failed — just as her ability to smooth over a controversy with calls for kindness seems to be failing this week.

In many ways, it feels as though niceness is no longer enough, as though it might perhaps even be slightly immoral. In this age of Donald Trump and #MeToo and apocalyptic climate change and gun violence and all the other things that make our futures seem ever more uncertain, and as though those in power are ever more unqualified to help us — do we even want to be nice to the powerful anymore? Is uncritical niceness to people who have made the world a worse place a good and admirable thing?

But the rising sense that niceness might at times be immoral stands in sharp opposition to all the things that Ellen has traditionally been very good at: the ability to be charming and likable and kind to everyone, no matter who they are or what they’ve done. That’s what Ellen supporters like Reese Witherspoon are applauding, and it’s what Ellen has built her defense on.

We’re in a pop culture moment that loves wholesomeness. That doesn’t mean we love niceness, too.

Right now, popular culture is in love with all that is wholesome: cute animal pictures, wholesome memes, wholesome movies, the general idea of friends being nice to each other, and just about anything that might give us a rest from the unending bleakness and horror of these, Our Troubled Times.

But pop culture’s love affair with wholesomeness does not bring with it a renewed appreciation for niceness, or at least not for niceness as Ellen is currently using it. And that is because our current thirst for wholesomeness is pointed in a different direction than Ellen’s much-lauded niceness is.

Wholesomeness as we are currently using the word is about people who are not in any particular position of power being kind to one another. The first post filed under BuzzFeed’s wholesome tag is a video titled “9 Best Things About Being Filipino-American,” featuring affectionate Filipino in-group stereotyping. The wholesome-st movie of 2018, To All the Boys I’ve Loved Before, was about a bunch of teenagers who have no platform or power besides their middle class wealth but who consistently do nice things for each other, like buying each other yogurt drinks and acting as pillows for each other during naps.

This wholesomeness is aspirational. It’s both optimistic and comforting. It’s about celebrating small moments of kindness that act as a balm, a refuge for normal people without power as we all try to survive the apocalyptic scourge of what those in power are doing to the rest of us: behaving in a way that either contributes to or neglects to show enough concern for the melting polar ice caps, the rise in hate crimes, the collapse of civil rights.

But the niceness that Ellen DeGeneres is celebrating in her friendship with George W. Bush — the niceness that she is extraordinarily skilled at performing — is not about kindness for the powerless. It’s about kindness for the powerful, for the people who helped to set in place the problems the rest of us are currently living in. It’s about avoiding messy social confrontations and awkwardness by being nice to those who have made the world a worse place.

The debate over Ellen’s niceness as an entertainer and celebrity is a close cousin to the “civility” debate that periodically roils the political world: the question of whether it is politically more effective for the left to “be civil” to members of the Trump administration, or whether publicly confronting some of those members — like Sarah Huckabee Sanders, who was denied service at a restaurant in an act of political protest in 2018 — might perhaps be the morally correct and politically viable way to go.

And while calls for civility remain prevalent, it’s no longer considered inarguably correct that civility always wins. As Nicole Hemmer wrote for Vox last year, the great victories of the civil rights movement came only after a combined attack of both civil and uncivil strategies.

“The current calls for civility ignore this longer history,” Hemmer argued. “They overlook the way civility has been used as a cudgel, providing moral cover for immoral laws. And they fail to grapple with the limits of what really can be achieved by civility.”

For much of Ellen’s audience in 2019, niceness is beginning to look the way civility has begun to look in the Trump era: like a desire to prioritize social norms above all else, even if that means ignoring or minimizing what is good and what is right. And if that’s what niceness means today, then not even a celebrity as charming as Ellen can make it viable as a brand again.

Watch: A Covid-19 victim’s daughter delivered a moving account of her father’s death — and a searing...
What the media missed about Joe Biden’s electability
House Democrats took a big step to get the Equal Rights Amendment moving again
WeWork might be worth just half of its former $47 billion valuation
Texas Sen. John Cornyn is facing his first real challenge from newcomer MJ Hegar
Eater at Home: How to stock a pantry, the best cookbooks, and more