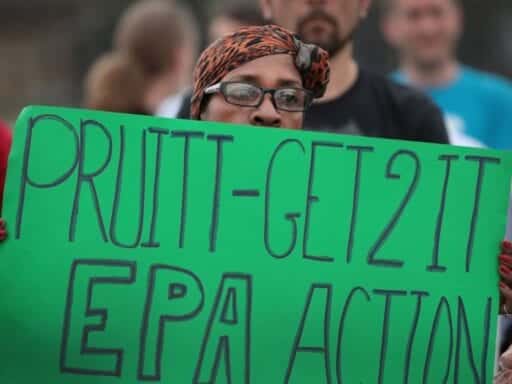 Scott Pruitt’s time as head of the Environmental Protection Agency may have only clocked in at a year and a half, but his brief tenure could have a lasting impact on marginalized communities dealing with poor health, water contamination, or air pollution, because of environmental injustice.

Pruitt’s final months at the EPA were undoubtedly haunted by various ethics scandals, from using taxpayer funds to build a $43,000 phone booth in his office, to allegedly enlisting his staffers in an effort to get his wife a high-paying job. Last week it became clear that the White House had enough, with reports suggesting that Pruitt was forced to resign as his scandals mounted. On Monday Pruitt’s deputy, former coal lobbyist Andrew Wheeler, took over at the agency.

But focusing on those controversies overlooks Pruitt’s efforts to roll back or curb the implementation of numerous environmental regulations. The changes Pruitt has sought would likely fall disproportionately on the people of color and low-income communities that numerous studies, including from Pruitt’s own EPA, have shown are more likely to suffer the harms of polluted water, air, and soil.

And a network of advocates, policy experts, and academics have long rallied around the cause of “environmental justice,” which argues that a person’s race or economic status should have no effect on the quality of the environment they live in.

Indeed, as with so many other policy debates that have occurred under the Trump administration, people of color stand to be particularly affected by moves made by Pruitt’s EPA. And for those concerned about the quality of the environment that people of color live in, Pruitt’s tenure has raised concerns that won’t end with his resignation.

Environmental justice groups were worried about Pruitt’s nomination. Their concerns were justified.

The push for environmental justice has been around for decades, but gained prominence during the Clinton administration, when the president signed an executive order charging the federal government to take on the issue. The EPA defines it as “the fair treatment and meaningful involvement of all people regardless of race, color, national origin, or income with respect to the development, implementation, and enforcement of environmental laws, regulations, and policies.”

The move was to correct “environmental racism,” the concept, supported by research, that shows how people of color are more likely to live in polluted or otherwise hazardous environments.

Environmental justice groups were worried about Pruitt’s nomination from the start, in part because he was appointed by a president who railed against the agency while campaigning. Additionally, Pruitt joined more than a dozen lawsuits challenging the EPA’s regulations during his time as Oklahoma’s attorney general. “This nomination is a particular threat to Latino communities who disproportionately bear the burden of impaired air quality and water pollution, and reside in areas most impacted by climate change induced extreme weather events,” the environmental group GreenLatinos argued when Pruitt was nominated for the EPA job in 2016.

During his confirmation hearing, Pruitt had his first opportunity to discuss environmental justice issues. Responding to a question about the issue from Sen. Cory Booker (D-NJ), Pruitt submitted written testimony saying he was familiar with the topic.

His actions in office called that familiarity into question. Pruitt supported Trump’s first budget, which proposed cutting some 31 percent from the EPA, and completely eliminated funding for the Office of Environmental Justice.

Advocates weren’t pleased. “To cut the environmental justice program at EPA is just racist,” said John Coequyt, campaign director of the Sierra Club. “I can’t describe it in any other terms than a move to leave those communities behind.”

Mustafa Ali, then the head of the office whose tenure at the EPA dated back to the 1990s, resigned in March 2017. In his resignation letter, Ali implored Pruitt to reconsider cutting programs aimed at helping marginalized groups, calling for Pruitt and the EPA to “continue promoting agency efforts to validate these communities’ concerns, and value their lives.”

Pruitt also targeted a number of reforms enacted by previous administrations. He attempted to delay rules that would implement higher standards for the amount of lead allowed in paint, require oil and gas companies to monitor and reduce methane leaks, and pushed for a two-year delay in implementing the 2015 Clean Water Rule. Pruitt also introduced a proposal giving states more oversight over how they dealt with toxic coal ash, a move that environmental advocates argued would open the door to companies skirting regulation.

“Pruitt’s inaction is one of many examples of how the Trump administration has attempted to stall the implementation of required health protections so that corporations can focus on their bottom lines, rather than on the communities or neighborhoods they may be polluting,” Lisa Garcia, vice president of Litigation for Healthy Communities at Earthjustice and a former EPA official during the Obama administration, wrote in a HuffPost op-ed earlier this year.

The changes Pruitt sought could have a significant effect on people of color. Studies have shown that black and Hispanic children are more likely to develop asthma than their white peers, as are poor children, with research suggesting that higher levels of smog and air pollution in communities of color being a factor. A 2014 study found that people of color live in communities that have more nitrogen dioxide, a pollutant that exacerbates asthma.

The EPA’s own research further supported this. Earlier this year, a paper from the EPA’s National Center for Environmental Assessment found that when it comes to air pollutants that contribute to issues like heart and lung disease, black people are exposed to 1.5 times more of the pollutant than white people, while Hispanic people were exposed to about 1.2 times the amount of non-Hispanic whites. People in poverty had 1.3 times the exposure of those not in poverty.

Even so, under Pruitt enforcement at the EPA has dropped considerably, with civil rights cases suffering in particular. This past March for example, the EPA rejected a complaint about a landfill from a predominantly black community in rural Uniontown, Alabama. Advocates and community residents argued that local officials had violated the Civil Rights Act of 1964, which bars discrimination on the basis of race and other factors, by allowing a landfill so close to the town.

The EPA argued that there was insufficient evidence to prove that the community, which is 90 percent black and has a median income of $14,000, was targeted by the landfill, a sprawling area that’s twice the size of New York’s Central Park and holds millions of tons of coal ash and solid waste.

”In terms of national concern, if EPA is not going to be able to acknowledge them in this case, we’re pretty dubious that they are going to reach that finding for any civil rights complainants anywhere in the nation,” Claudia Wack, a member of Yale University’s Environmental Justice Clinic, which represented Uniontown residents, told Inside Climate earlier this year.

For years, the EPA was slow to address environmental racism. Pruitt halted any progress the agency was making.

As Vox’s Umair Irfan has noted, the EPA is not a particularly fast-moving agency, and changes to rules can take years. Pruitt’s tenure saw a concerted effort to delay many of these rules further.

Some of these efforts, like the attempt to block the new lead paint rules, would be struck down in court. “They’re producing a lot of short, poorly crafted rulemakings that are not likely to hold up,” Harvard environmental law professor Richard Lazarus, told the New York Times earlier this year.

Pruitt did not hide his dislike of the agency he was tasked with leading. “The American people are tired of seeing billions of dollars drained from our economy due to unnecessary EPA regulations,” he said in a press release announcing his nomination as EPA head. His argument re-emerged as Pruitt targeted several regulations and drastically reduced the size of the agency.

Pruitt’s actions have been successful at shifting what the EPA prioritizes and how the agency operates. And those changes make it clear that environmental justice issues aren’t very likely to get much attention.

Part of the struggle here is that the government has long dragged on enforcement. Even before Trump took office, the EPA had been criticized for its handling of civil rights complaints — a 2015 report from the Center for Public Integrity noted that the agency’s civil rights office regularly dismissed complaints, often declining to investigate them. And the Flint, Michigan, water crisis, which drew national attention in 2016, also called attention to the EPA’s slowness to respond in the earlier days of the crisis, which was the result of a decades-long failure to respond to environmental inequalities in the area.

As the Obama administration came to a close, it began to make a more ambitious effort. In 2016 the EPA unveiled a four-year plan to address a number of issues affecting communities of color, from lead poisoning to air pollution.

Some challenged those developments as being too little, too late. “It’s become achingly apparent that well before Trump, those who purported to champion environmental justice — primarily Democratic legislators and presidents — did little to codify the progress and programs related to it, even when they were best positioned politically to do so,” a 2017 ProPublica report noted.

With the Trump administration in the White House, it appears that groups looking to advance environmental justice at the federal level are currently shut out of power. And while the EPA’s leaders are changing, the agency’s limited willingness to address environmental racism probably won’t move any needles.

Joe Biden smashed his single-hour fundraising record after the first presidential debate
A Japanese billionaire is running a $9 million basic income experiment via Twitter
Trump just gave Americans a lesson in white history
Vox Sentences: Strzok out
Trump and Biden want you to believe they’re more anti-war than they are
The toilet paper shortage is more complicated than you think