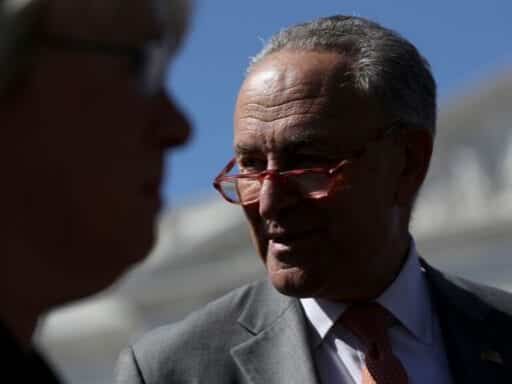 In a rare bipartisan move, the Senate unanimously passed a resolution calling on the White House to disclose a whistleblower complaint.

Senate lawmakers voted unanimously Tuesday to give the whistleblower report filed against President Donald Trump to the House and Senate Intelligence committees.

Even if it was a rare bipartisan moment, the vote doesn’t hold a ton of weight: It was in favor of a nonbinding resolution championed by Senate Minority Leader Chuck Schumer, who has called for the Trump administration to disclose a whistleblower complaint regarding the president’s communications with Ukraine. It does, however, indicate that no Senate Republican was willing to block the resolution and to publicly back the White House’s attempts to withhold the complaint.

Earlier on Tuesday, Trump said he would share the transcript of a phone call that took place with Ukrainian President Volodymyr Zelensky over the summer, though the administration has continued to resist further disclosures of the whistleblower report itself.

The Senate vote on Tuesday directly pushes back on this decision. It was conducted in a way that offered some cover for Republicans: As George Washington University’s Sarah Binder noted, the vote was a “voice vote,” ensuring that individual Republicans were not put on the record against Trump on the issue. Still, Senate Majority Leader Mitch McConnell could have chosen to block the resolution and he did not.

It’s still unclear exactly what the whistleblower report contains. A report from the Wall Street Journal that was published since the emergence of the complaint revealed that Trump allegedly pressured Ukrainian President Volodymyr Zelensky to investigate the business ties of Hunter Biden, the son of former vice president and current 2020 candidate Joe Biden, on eight occasions. Subsequent reporting from the Washington Post also found that the Trump administration restricted military aid from Ukraine before his call with Zelensky this summer, spurring Democrats to question Trump’s use of federal money as potential leverage for his personal gain.

Trump has confirmed pieces of the story himself. He admitted to discussing Biden in a call with Zelensky, but claims that the call was aboveboard. On the revelation of withholding aid, Trump gave various explanations, including that he thinks other countries should also help cover it.

How cricket went from an old British pastime to primetime entertainment for billions
National Guard troops from DC, Maryland, and Virginia deployed after Trump supporters take over the ...
Trump announces creation of 'Space Force'
Watch Mike Pence pack 2 big lies about the environment into a single 20-second clip
The US is getting an official women’s history museum
Coping with war and crisis through memes