Even while sick with Covid-19, Trump sees masks as a symbol of weakness 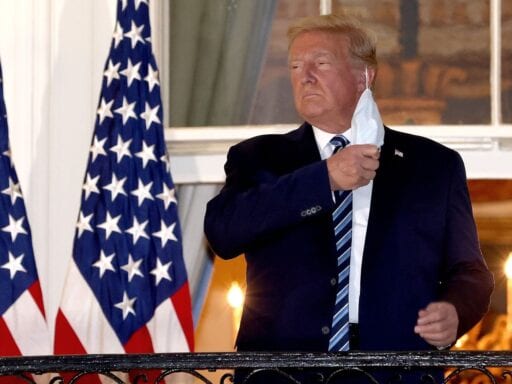 President Donald Trump has been pretty active for a sick man.

After testing positive for the coronavirus, being airlifted to a hospital. and receiving experimental treatments, steroids, and supplemental oxygen, Trump began a series of public appearances. While he was still hospitalized, Secret Service members drove him around the perimeter of Walter Reed medical center so he could wave to fans. On October 5, the day he was discharged, he posed for cameras and appeared in a campaign video — removing his mask, stuffing it into his pocket, and giving a double thumbs-up, as if to demonstrate his triumph over the virus.

His appearances and facial expressions fueled ongoing discussions about Trump’s health. People wanted to see how fit or unfit he looked physically, especially in the wake of topsy-turvy and confusing statements about the president’s condition from White House physician Sean Conley.

Trump’s displays of risky or even aggressive behavior following his Covid-19 diagnosis are actually a lot more common than they may seem. His behavior, which seems to fly in the face of reports about his tenuous health, fits a pattern of what behavioral scientists call “precarious masculinity.”

BREAKING: Pres. Trump arrives back at the White House, and removes his mask, following several nights at Walter Reed Medical Center. The president left Walter Reed this evening despite not having completed his full COVID-19 treatment. https://t.co/XCER5YMh2e pic.twitter.com/rTfKo35d4G

It’s the idea that traditionally masculine ideals — toughness, strength, power, virility — are hard to achieve as well as hard to maintain. Men who see these qualities as part of their identity are constantly trying to prove it in their words and actions. And when those men are threatened, they double down by performing risky and even self-damaging behaviors in order to compensate. The more public their actions, the more they feel like they’re reasserting their manhood.

It’s as though Trump sees his diagnosis as a dare, a slight against his image of power and health. Now he’s chosen to double down and prove his virility through risk with no real reward — particularly when it comes to eschewing the face mask, an item he considers “weak.” This is “precarious masculinity.”

To understand Trump’s behavior and actions now, means understanding how masks — which medical experts say are crucial to fighting the spread of coronavirus — were politicized in the first place and what they stand for.

Prior to Trump’s diagnosis, right-wing pundits and Republican lawmakers turned masks into a political issue, often framing masks as an indicator of weakness or meek conformity. Gestures like Vice President Mike Pence’s maskless visit to the Mayo Clinic in April and actions like Trump calling Dr. Anthony Fauci’s credibility into question further painted masks as something strong people don’t need. Back in May, Trump made fun of Joe Biden for wearing a mask and even during the first presidential debate, Trump again made fun of Biden’s mask-wearing procedures.

As experts told me in previous interviews, masks are seen as a tangible acquiescence to the virus.

Since the virus is invisible and very tiny, traditional ways displaying masculine dominance — physical competitions, aggression, beating something up, etc. — don’t work. Wearing a mask means living on the coronavirus’s terms. Not wearing masks became a way for people, men specifically, to signal that they were tougher than or unafraid of it.

And that help explains why Trump stuffing his mask back into his pocket was a symbolic gesture. It was his attempt at appearing strong.

Trump removing the mask was as if to say he had conquered the disease and had nothing to fear. After the spectacle of his hospital discharge, Trump tweeted “Don’t be afraid of Covid. Don’t let it dominate your life.” Trump even promised to attend the October 15 debate, despite the fact that medical experts say that people who come into contact with an infected individual should quarantine for at least 14 days.

Logic and science, here, are just more foes for him to best; denying the infectiousness of the virus and his danger to others is another punchhole on his man card.

The term for this phenomenon and Trump’s behavior is called “precarious manhood,” coined by Joseph A. Vandello and Jennifer K. Bosson, researchers from the University of South Florida. Vandello and Bossun use the term “precarious” because they observed that masculinity, or what society thinks is “manly,” is something that’s hard to achieve and easily lost. And when masculinity is slighted, men compensate by acting out in risky ways.

“[M]en experience more anxiety over their gender status than women do, particularly when gender status is uncertain or challenged,” they wrote in their 2012 research paper. “This can motivate a variety of risky and maladaptive behaviors, as well as the avoidance of behaviors that might otherwise prove adaptive and beneficial.”

It’s important to note that Trump’s actions didn’t happen in a vacuum. This way of behaving is common among his supporters as well. After the president was released from the hospital, Trump ally Rep. Matt Gaetz tweeted out how Trump had figuratively beaten the virus:

President Trump won’t have to recover from COVID.

COVID will have to recover from President Trump. #MAGA

Republican Senator Kelly Loeffler tweeted out an edited video of Trump taking on coronavirus in a wrestling ring:

And Republican pundit Tomi Lahren tweeted out the very familiar refrain about how masks and Joe Biden are feminine and weak:

Might as well carry a purse with that mask, Joe. https://t.co/RugCFkC1GQ

The language — “recovering from Trump” — imagery, and gender ideas that these three used is in lockstep with the tenets of precarious manhood. They’re imagining a fantasy in which Trump is giving the virus a beating and from that, they’re admiring how strong he is and reflexively, how weak people who wear masks are.

And while the cocktail of steroids the president has reportedly taken could make a patient feel a rush of power and energy, others who have experienced similar treatments report that that feeling wears off.

The problem is that while these gestures make Trump and his followers feel like he’s strong, the United States still hasn’t recovered from the pandemic. As of October 7, there were 43,562 new cases of coronavirus in the US, according to Johns Hopkins and Dr. Anthony Fauci warned on Tuesday that 300,000 to 400,000 more Americans could die before the pandemic ends.

Either way, strength does not change the fact that the virus is contagious and mask-wearing is a precaution that Americans can take to keep ourselves, our family members, our friends, and neighbors safe. While shunning masks was crucial for the president to assert his manliness and strength, it’s important to remember that regular Americans don’t have the medical care or clinical trial therapy that Trump had to make him seem so strong.

The House just passed a resolution calling on Mike Pence to invoke the 25th Amendment
A QAnon supporter just won a Republican primary for US Senate
Joe Biden’s record on school desegregation busing, explained
Money Talks: one spouse had student loans, the other paid it all off
Salvadorans on TPS will now be able to stay in the US for another year
Anatomy of an executive order: What President Trump’s order on family separation does