Every platform that has cracked down on Trump this week 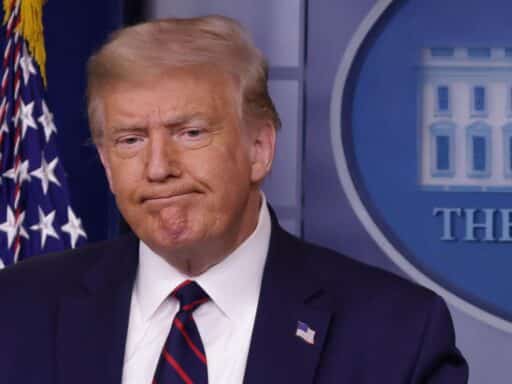 Digital exile for “the Ernest Hemingway of 140 characters.”

On Friday, after dozens of “this claim is disputed” labels and more than a few international incidents, Twitter finally banned President Donald Trump, permanently.

The ban is a seismic shift after four years of nearly nonstop tweets from the president, who in 2015 laid claim to the title “the Ernest Hemingway of 140 characters.”

And it deprives Trump of what Politico’s Alex Isenstadt this week described as his “most potent political weapon” — a digital cudgel used to incite violence and punish dissent.

But while the demise of the @realDonaldTrump handle is among the biggest tech headlines of the week — it even got its own obituary from the AP — Twitter isn’t the only platform that decided enough was enough. At least 11 different platforms have taken action against Trump, or communities and content related to Trump, this week.

As New York Times tech journalist Mike Isaac put it on Twitter: “my mans phone is a paperweight.”

cannot even imagine how mad he is rn

my mans phone is a paperweight https://t.co/bwSlCGauso

Unlike Trump’s Twitter ban, the Facebook and Instagram bans aren’t necessarily permanent — but they will remain in place at least through the end of Trump’s term in office.

“The current context is now fundamentally different, involving use of our platform to incite violent insurrection against a democratically elected government,” Facebook founder and CEO Mark Zuckerberg wrote in a Thursday post explaining his decision. “We believe the risks of allowing the President to continue to use our service during this period are simply too great.”

Snapchat and Twitch — the popular livestreaming platform — likewise disabled Trump’s accounts outright. Twitch described the move to Axios as “a necessary step to protect our community and prevent Twitch from being used to incite further violence.”

And Shopify — which provides a platform for online storefronts — pulled down Trump Organization and Trump campaign merchandise stores in response to the president’s violation of a company policy prohibiting “promotion or support of organizations, platforms or people that threaten or condone violence to further a cause.”

Other sites, such as Pinterest and TikTok, did not ban Trump — he isn’t known to have an account on either site — but did move to limit the spread of hashtags and other content associated with the president’s promotion of right-wing conspiracy theories. Pinterest tells Axios that it has been limiting the reach of certain hashtags like #StopTheSteal “since around the November election.”

On TikTok, videos of Trump’s speech to supporters on Wednesday exhorting them to march to the Capitol will be removed, and hashtags like #stormthecapitol and #patriotparty will redirect to a notification about the platform’s community guidelines.

According to TechCrunch, there are some exceptions to that policy — news organizations, for example, can still use video of the speech — but any other content that violates TikTok’s misinformation policy will be removed. YouTube, which has also been forced to grapple with content promoting insurrection and conspiracy theories, has tightened its policies regarding election misinformation.

Several more platforms have cracked down on pro-Trump communities online, many of which have seen a sharp uptick in violent rhetoric in the aftermath of Trump’s election loss.

Reddit, the sprawling internet forum organized into topic-based channels, called subreddits, banned the r/DonaldTrump subreddit outright on Friday for “repeated policy violations in recent days regarding the violence at the US Capitol.”

Notably, r/DonaldTrump is just the latest Trump-focused subreddit to be taken down by the company. Reddit also banned the subreddit r/The_Donald in June last year for violating hate speech policies, causing the community to spin off into an independent forum under the name TheDonald.win.

Discord, a platform centered on voice chat, also banned a server called The Donald on Friday for its connection to the deceased subreddit and to the TheDonald.win forum.

In STILL OTHER news, @Discord says it has banned server The Donald, which was connected to TheDonald dot Win and the Donald subreddit.

Made decision “due to its overt connection to an online forum used to incite violence and plan an armed insurrection,” spox says.

Parler gets the boot over Capitol storming

Not only have sites taken action against Trump and various Trump-related communities in the aftermath of Wednesday’s deadly attack on the US Capitol, but an entire social media platform favored by pro-Trump actors is set to go under for its role as a forum for violence and incitement.

Parler, a conservative social media platform that brands itself as a “free speech” alternative to sites like Twitter, was removed from the Google Play Store and the Apple App Store in quick succession this week. Amazon, which hosts the site, has since announced that it will no longer do so.

Amazon has said it will pull its cloud hosting support for Parler on Sunday night, and the app is then widely expected to go down for at least a short stretch of time while it looks for a new web hosting service. Amazon controls the lion’s share of cloud hosting, serving about 40 percent of the internet, according to the Verge, which means it could be difficult for Parler to find alternative hosting — though if it does so before midnight Pacific time, it could remain online.

Amazon’s decision, which was first reported on Saturday by BuzzFeed News, comes after the company concluded that Parler was doing little to meaningfully crack down on open calls for violence being spread on the platform, and thus was in violation of the Amazon Web Services’ terms of use.

As was the case in communities like TheDonald, users on Parler discussed marching on Washington “in numbers that no standing army or police agency can match” and debated which politicians pro-Trump insurrectionists should kill first.

Parler had a large user base as of November 2020, with about 10 million people total. That population grew even further this week — according to a story by TechCrunch, Parler was installed nearly 270,000 times from US app stores since Wednesday.

But Amazon’s decision to boot Parler from its web-hosting service, as well as the takedowns by Apple and Google, could leave a mark. Without access to the Apple App Store, Parler executive Amy Peikoff told Fox News’ Tucker Carlson Saturday, “We’re toast.”

And Parler’s likely disappearance will further stymie Trump’s search for a new outlet. Many conservatives aggrieved with platforms like Twitter — or those who have been banned outright, as is now the case for Trump — have fled to Parler in recent months. Trump’s team reportedly discussed last year whether he should make the switch.

After this week, though, Trump will likely have to look elsewhere for his social media — and as decisions by Facebook, Snapchat, and others illustrate, he’s running low on options.