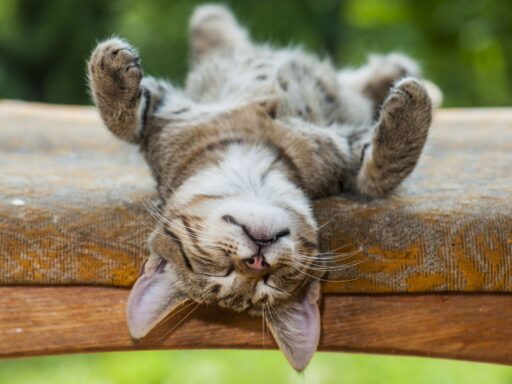 Philosopher John Gray explains why we’re doing it wrong and we should live more like cats. (Dogs, not so much.)

Humans might be the smartest animal on this planet, but are we the wisest?

Wisdom, after all, isn’t really about knowledge. Humans are the only creature on earth capable of building a rocket ship or developing a vaccine. That makes us intelligent, not wise.

To say that someone is wise is to say they understand something about how to live. For instance, I know I’m being an asshole when I wake up grumpy and act impatiently with my wife and son. But often I still behave like a grumpy asshole. My problem isn’t a lack of knowledge so much as a lack of wisdom. I simply can’t take my own advice.

A new book by the esteemed British philosopher John Gray, called Feline Philosophy: Cats and the Meaning of Life, offers a somewhat provocative suggestion: If we’re looking for models of wisdom, we should look at cats. According to Gray, humans think too much. Indeed, we invented philosophy in order to divert ourselves from the anxieties created by our overactive minds.

Cats, on other hand, have nothing to learn from philosophy because they have no need for diversion. They’re among the wisest animals because they’re spontaneous and playful and content with whatever life presents them. And they’re too immersed in the present to worry about what might happen in the future. Cats aren’t exactly unique in this regard (a fact Gray happily admits), but they do seem to stand out.

I should say that Gray’s book is obviously not an empirical study, and it’s not presented that way. It’s self-consciously light, and Gray definitely projects some of his own beliefs onto cats. But the tongue-in-cheek tone makes the book all the more accessible.

If we accept the conceit of Gray’s book and just look at how cats live, then maybe we can learn a thing or two. In that spirit, I reached out to Gray to talk about why our feline friends are so much wiser than we are, and why all animals, especially cats, may not be able to teach us how to think, but they can absolutely teach us how to live.

If cats could talk, what do you think they would tell us?

I guess the first question is: If they could talk, would they find us sufficiently interesting to talk with? I try to imagine in the book whether cats would philosophize at all if they had the intellectual capacity to do it. And if they did, I’m certain it would be for very different reasons than humans philosophize.

Why do humans philosophize?

I think it’s a search for quietude, for a state of calm. And if that’s the case, then you have to ask why humans have such a need for calm. Humans are rather anxious and restless by nature. That’s what makes us so different from cats, to get back to your original question. Unless cats are hungry or mating or directly threatened, they default to a condition of rest or contentment or tranquility — basically the opposite of humans.

So if cats could philosophize, my guess is they’d do it for their own amusement, not because of some deep need for peace. Philosophy is such a human thing because it comes from this anxious search for answers, for freedom from anxiety, and really freedom from our own nature. But of course that’s not achievable. If you yearn for tranquility, you’ll spend your life in turmoil because that’s not what life is like.

The ease with which cats live is such a lovely alternative to humans in that sense. There’s a natural rhythm or flexibility to their day-to-day life that’s rarely achieved by humans. We’re obviously very different from cats, but I do think we can learn something about how to live from them.

I live with a cat and a dog, and the biggest difference I notice is how manic the dog seems in comparison to the cat. The cat is cool to the point of indifference, whereas the dog always seems to need some kind of external stimulation. It’s so clear that dogs have become, well, more human and the cats have remained cats.

Exactly. Cats have remained non-human. They’re like aliens, in a sense. They have a mind and they can get to know us, but they remain alien to us. Of the four cats I had, one of them in particular was extraordinarily subtle in her responses to me and my wife. She reacted differently to each of us. But the cat never looks for validation from us, the way, say, dogs do. Cats are living their own lives and that’s why they seem so indifferent to us.

Do you think cats are capable of loving humans in the ways dogs seem to be?

I think they can come to love humans, but unlike us, they can love humans without needing them. They come to love us in the sense of enjoying our company. They may even delight in it and sometimes they’ll initiate games and play and some kind of communication with us, but at bottom, they don’t really need us and we know it. They can love us without needing us. That’s an almost impossible contradiction for humans, I think.

I want to go back to what I consider the genius of cats, which is their imperviousness to boredom. Wherever they are, whatever they’re doing, every moment is complete and perfect — or at least it seems that way. Why can’t humans live like that? Why can’t we see the folly in our anxiousness?

That’s the big question, isn’t it? When humans aren’t in immediate pain or experiencing immediate pleasure, we’re bored. If not immediately, then soon. And all of our pleasures — sex, drinking, good food, whatever — all become boring after a while. Why is that? When cats are not immediately under some direct threat, they revert to being content. The sensation of life itself is enough for them.

One of the thinkers I discuss in the book is the French philosopher Pascal. He says a great deal of human activity is basically diversionary. He says if you put human beings in a situation where they have nothing to do, they’ll be intensely unhappy. They’ll do things like gamble or start wars or really anything to escape the condition of inactivity. This is just a fundamental fact about humans.

I know a few really rich people, people who don’t have to sweat to keep their money. And they all know this about themselves. They know boredom is a threat. One of them told me recently that the only way he can feel excitement is gambling, because then he knows he can lose everything and that excitement wakes him up from the lethargy of life. But this is a problem for basically everyone who isn’t in desperate poverty or in desperate need.

And where do you think this pathology comes from? Are we too self-aware to be happy?

I think it comes from the shock of self-consciousness and the revelation of mortality. If you don’t have an image of your self, as I’m fairly sure cats don’t, then you won’t think of yourself as a mortal, finite being. You may, at some point, sense something like death, but it’s not a problem for you. When death happens for cats, they seem quite ready for it. They certainly don’t waste their lives worrying about death.

Other animals fear death, but worry is a very different thing. You fear what’s right in front of you. But worry is an act of imagination, something you can only do if you’re anxious about the future.

Yeah, and I think there’s something uniquely human about anxiety over death and constantly thinking of ourselves as mortal. This is where our incessant need for storytelling comes from. If you sit around considering your own mortality, you’ll be driven to invent stories about an afterlife so that the stories you fashion for yourself can carry on after death. This is what religions have done. And it’s what so-called transhumanists do today. They imagine all these technological solutions to death and they hope that our minds will persist after our bodies fade away.

Cats have no need for these games. They don’t have this problem because they don’t have the concept of death. They die, of course, but they don’t fret over the idea of death. This need to divert ourselves is deeply human. So at the end of the book, when I give my 10 feline tips for living, I just say that if you can’t live as freely as cats, and most of us can’t, then by all means return to the human world of diversion without regret and stay in it. Take up politics. Fall in love. Gamble. Do all the things humans do and don’t regret it.

And you know, maybe that’s what a cat would say if it could philosophize. It would say, “Don’t struggle to be wise because it doesn’t lead anywhere.” Just take life as it comes and enjoy the sensations of life as cats too. And if that’s too austere for you, then you can always immerse yourself in the human world of illusion and distraction.

In defense of humans, I’ll concede that we’re awkward and anxious and self-pitying and all those things, but we also have the capacity for transcendent love and art and spirituality, and none of those things are available to cats. So maybe the benefits of thinking outweigh the costs?

That’s true, and I do think that all the troubles of being human are worth the price. But I’d also say that we should look around the world of nature and study how other creatures live and maybe incorporate the lessons into our own lives. There are, after all, lots of ways to live, lots of ways to be human. Cats, like other animals, are wise in all kinds of ways, and it’s worth reflecting on that and it’s worth pushing back on the Western idea that the good life is really the intellectual life. That’s such an impoverished view of the good life, and I find it easier to see that through the eyes of a cat.

If you had to distill the best of feline philosophy in a single commandment, what would it be?

Live for the sensation of life, not for the story you tell about your life. But never take anything, including that commandment, too seriously. That’s the great lesson from our feline friends. No animal is more spontaneously playful than cats. Which is why, if they could philosophize, it would be for fun.

“He will be missed dearly”: Joe Biden and Barack Obama release statements on John McCain’s death
Joe Sestak, former congressman and admiral, ends his bid for president
It sure looks like China’s preparing for a trade war with the US
Pete Buttigieg and Beto O’Rourke’s feud boils over at the Democratic debate
Trump reportedly hid details of his meetings with Putin from his own administration
The Quarry is a slow-burn Western about guilt, racism, and salvation on the US-Mexico border