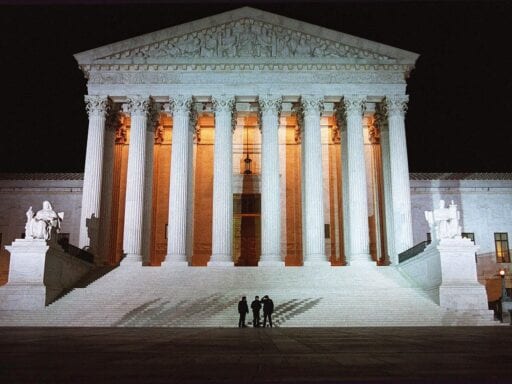 The Supreme Court will hear another lawsuit to overturn Obamacare later in 2020. | Manny Ceneta/AFP/Getty

When is SCOTUS going to rule on Obamacare? And 6 other questions, answered.

Obamacare is going back to the Supreme Court.

The justices announced on Monday that they would hear the ongoing lawsuit to overturn the health care law. Vox’s Ian Millhiser went deep on the case and the background. This is the third, and presumably last, in a trilogy of cases that have threatened the law’s future since President Obama signed it in 2010.

But if you need a bite-size explanation (or want an easy link to explain the case to friends who are wondering), let’s run through the big questions here.

1) What is this lawsuit about?

In 2017, Republicans in Congress passed their tax bill and President Trump signed it into law. That law, among its many changes to the US tax code, repealed Obamacare’s financial penalty for failing to carry health insurance. But it did not repeal the mandate itself. The requirement that all Americans have health insurance is still technically on the books; there is just no penalty for failing to meet it.

A group of Republican state officials, led by Texas, used this legal limbo to challenge Obamacare’s constitutionality. They have since been joined by the Trump administration. Their argument goes something like this:

Democratic-led states and many legal experts disagree. First, they don’t think anybody should be able to sue at all. Who is being harmed by … not being fined because they don’t have insurance? Where is the legal standing to bring the lawsuit in the first place?

But they also reason that because Congress chose to repeal the mandate but nothing else, then lawmakers intended for the rest of the law to stand without it. Congress changes our laws all the time, and nobody usually argues that the underlying statute should be overturned.

So on the merits, once we get past the standing issue, this case is about Congress’s ability to amend laws after they’ve taken effect.

2) What do legal experts think about the Republican argument?

Most of them are extremely dubious, for the reasons above. This is how Millhiser summarized the legal consensus of conservatives:

Jonathan Adler, a conservative law professor — and a leading evangelist for an earlier lawsuit seeking to undercut the Affordable Care Act by reading a poorly drafted provision of the law to cut off much of the act’s funding — labeled many of the red states’ arguments “implausible,” “hard to justify,” and “surprisingly weak.” The Wall Street Journal’s editorial board labeled this lawsuit the “Texas Obamacare Blunder.” Yuval Levin, a prominent conservative policy wonk, wrote in National Review that the Texas lawsuit “doesn’t even merit being called silly. It’s ridiculous.”

They aren’t alone, either. Some Republicans in Congress think the lawsuit is ridiculous too. Sen. Lamar Alexander, the Republican chair of the Senate health committee, has criticized the Trump Justice Department for pursuing the litigation. Sen. Susan Collins of Maine, one of the key Republican swing votes on the Senate tax bill, says she did not think she was voting to overturn Obamacare entirely (and she had notably voted earlier the same year against the Republican repeal plans).

3) When will the case be heard and decided?

I checked with the University of Michigan’s Nicholas Bagley, a leading health care law expert, and he said he expects this to be the rough schedule:

So this lawsuit will be hanging over the rest of the 2020 campaign. But before we get to the politics, let’s remember there are real stakes here.

4) What would happen if the Supreme Court overturned Obamacare?

It would be, in effect, the same as Congress repealing Obamacare without anything to replace it. Everything would go: protections for preexisting conditions, subsidies that help people purchase insurance, the Medicaid expansion. Even provisions unrelated to insurance, like nutrition requirements for food labels, would be gone.

The Urban Institute reviewed the likely consequences in grim detail:

The number of uninsured people would increase by approximately 20 million, or 65 percent nationally, [and] the increases in uninsurance would be most heavily concentrated among people with the lowest incomes (below 200 percent of the federal poverty level), young adults, families with at least one full-time worker, and residents of the South and West. These subpopulations of the United States have experienced the largest gains in insurance coverage under the ACA and consequently would be hit the hardest if the law were repealed.

States that expanded Medicaid would get the worst of it: Urban projected their uninsured rates would nearly double if the law were overturned. The uninsured rate for black Americans would increase from 11 percent today to 20 percent without Obamacare; there would also be a dramatic spike in uninsurance among Hispanics.

And considering we know health insurance protects people financially and helps them live longer, we would expect that increases in the uninsured rate would mean more people going into debt over medical bills and, yes, people dying because they lack coverage.

One thing to consider: It is possible the Court could choose to overturn the mandate and only a few other select provisions, like the preexisting conditions rules, which were very much linked to the mandate when the law was drafted.

But that’s not what the states or the Trump administration are asking for. They want the whole law tossed out.

5) So is the Supreme Court going to overturn Obamacare?

We should never presume we know how the Supreme Court justices are going to rule. But it does seem unlikely they’ll overturn the law entirely so long as the Court’s composition doesn’t change.

Roberts has rescued Obamacare twice from legal challenges that threatened its very existence. Would he really choose this case, with its validity doubted even by conservative legal scholars, to pull the rug out from under it?

But there is an important caveat above: “so long as the court’s composition doesn’t change.” It’s uncomfortable to mention, but liberal Justice Ruth Bader Ginsburg has not been in good health.

From Bagley, writing in the JAMA Health Forum:

Oddly enough, the deciding factor may have less to do with law than with medicine. In August 2019, Justice Ruth Bader Ginsburg revealed that she had undergone treatment for a malignant pancreatic tumor. Although she now says that she is cancer free, pancreatic cancer is a tough diagnosis at any age, much less at 86 years. Can the liberal justices count on Justice Ginsburg to remain on the Supreme Court through the end of this year? If not, agreeing to hear the case now could be especially risky: President Trump might have a chance to replace her with a conservative justice, who could in turn provide the fifth vote for ending the ACA. Maybe it is better to wait and hope that a Democrat prevails in the coming election.

Senate Majority Leader Mitch McConnell has made clear he would fill a Supreme Court vacancy in the months before the presidential election. If the Court’s ideological balance shifted from 5-4 in favor of the conservatives to 6-3 before the case is heard, then all bets are off.

6) Can Congress do anything to stop the lawsuit?

Some liberal scholars think so. Bagley and his Michigan colleague Richard Primus laid out a few options in 2018, shortly before Democrats took control of the House:

However, Democrats don’t agree at all on whether they should actually take those steps, and, to date, the House has not passed any such bills. They fear, for one, that the Republican Senate would not act.

“We take very seriously the threat we could have a worst of all worlds: A legislative fix does not become law and only serves to undermine the position of the House, which is that the ACA is constitutional as is,” a House aide told me last year.

But Bagley finds that line of reasoning unconvincing.

“There’s no such thing as risk-free litigation,” he told me previously. “You should do anything and everything you can to make this misbegotten lawsuit go away.”

7) How is this going to affect the election?

It’s hard to say! After all, we don’t even know who the Democratic nominee is going to be. But it seems likely the Trump administration’s support for a lawsuit that would lead to 20 million people losing their health insurance is going to be a focus for Democrats’ messaging.

The polling already shows voters trust Democrats over Trump on health care and that health care is a big issue for voters. And now, the Justice Department is likely to be filing briefs over the coming months arguing on Trump’s behalf that Obamacare should be overturned. Then we’ll have the very public drama of oral arguments at the Supreme Court, possibly in the month before voters head to the polls.

It’s going to be a big issue. And remember, Obamacare is more popular today than it ever has been:

Nevertheless, Republicans are still pushing to “repeal” the law by any means necessary. They’ll get their next chance at the Supreme Court.