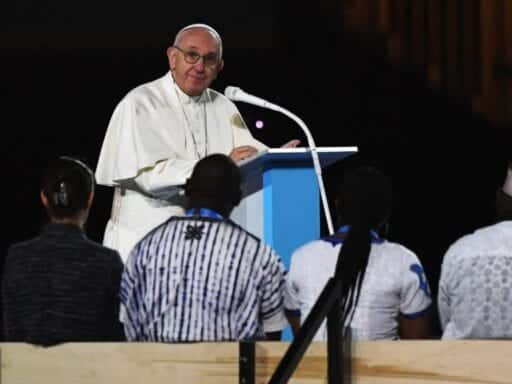 A former high-ranking Vatican official says Pope Francis should step down from the papacy, because he knew about sexual abuse allegations against an influential American cardinal — and participated in covering them up.

Carlo Maria Viganò, a former papal nuncio (an ambassador-like position) wrote an 11-page open letter alleging that both Pope Francis and his predecessor, Pope Benedict XVI, knew about decades’ worth of allegations against Cardinal Theodore McCarrick, former Archbishop of Washington, DC. He was removed from active ministry in June and later resigned his cardinalship after revelations emerged that he had sexually abused generations’ worth of junior seminarians and young priests as a priest, then bishop in New Jersey. He is also accused of having sexually abused at least two minors.

McCarrick is currently facing an internal, ecclesiastical trial, and has been ordered by the Vatican to remain in penitential seclusion until that time. Due to the statute of limitations on his alleged offenses, he faces no criminal proceedings at this time.

In Viganò’s letter, which has been posted at the National Catholic Register and Lifesite News, Viganò alleges that, while McCarrick’s behavior toward adults was an open secret in the Vatican, many high-level officials, including Francis himself, conspired to keep McCarrick in active ministry (the letter makes no mention of any knowledge about McCarrick’s abuses against children).

If true, the letter represents one of the most explosive revelations to emerge out of the Catholic clerical sex abuse scandal. The suggestion that Pope Francis knew about McCarrick’s offenses, and nevertheless chose to break with his predecessor in order to rehabilitate him — the first time a pope has been directly implicated in participating in a coverup during his papacy — could torpedo Francis’s papacy. Already, Viganò is calling for Francis’s resignation.

Viganò calls for the pope’s resignation

According to the letter, Benedict had been made aware of McCarrick’s abuse of seminarians, and had — after years of delay — ultimately imposed sanctions on him similar to the ones the Vatican has imposed upon him now, including a lifetime of penance and seclusion. Benedict had also barred McCarrick from traveling, lecturing publicly, or celebrating a public mass. Viganò writes that he does not recall the exact date of these sanctions, but believes they occurred shortly before Viganò became papal nuncio in 2011.

Viganò said he personally told Pope Francis about the allegations and sanctions against McCarrick in 2013, shortly after Francis became pope. However, he writes, Francis ultimately lifted the sanctions against McCarrick: reversing the Vatican travel ban and allowing him to remain an influential figure in the American Catholic world, one who traveled frequently on Church business. McCarrick participated in a panel on US-Cuba relations, and was instrumental in choosing and promoting other high-level bishops, including Donald Wuerl, current Archbishop of Washington. Vignanò suggests that many of these appointments, including Wuerl’s, were tacit rewards granted by McCarrick in exchange for silence.

“A chorus of voices is rising especially from the lay faithful,” Viganò writes, “and has recently been joined by several bishops and priests, asking that all those who, by their silence, covered up McCarrick’s criminal behavior, or who used him to advance their career or promote their intentions, ambitions and power in the Church, should resign.”

He added “Francis is abdicating the mandate which Christ gave to Peter to confirm the brethren. Indeed, by his action he has divided them, led them into error, and encouraged the wolves to continue to tear apart the sheep of Christ’s flock.”

Viganò has long been involved in internal Church conflict

Viganò has long been a controversial figure within the church. An arch-conservative known for his opposition to LGBTQ issues, Viganò was removed from his office in 2016 after brokering a secret meeting, without the pope’s consent, between Francis and Kim Davis, the Kentucky clerk whose refusal to sign same-sex marriage licenses briefly made her a hero in conservative circles.

His letter, at times, conflates consensual homosexual behavior — itself prohibited by the Catholic Church — with abuse (at one point, Viganò says that “the homosexual networks present in the Church must be eradicated”). His letter reflects what Massimo Faggioli, a professor at Villanova University and a commentator on Catholic issues, previously characterized as an increased willingness on the part of conservative, anti-Francis Catholics to see the latest developments in the sex abuse scandal as an opportunity to advocate for a changing of the guard. In demanding church leaders up to the pope himself resign, Viganò and other Catholic conservatives are using the scandal as an “opportunity to reform the Church from abuses as a counter-revolution … against the Church of Vatican II itself,” Faggioli told Vox in an email, referencing a 1962-1965 council many conservatives see as pushing the Vatican in a discomfitingly liberal direction.

Viganò’s letter is just one complication in an already particularly difficult time for the Church. Earlier this month, a Pennsylvania grand jury released a 1,400-page report accusing 300 priests in the state of abusing over 1,000 minors, and countless more — including Wuerl — in perpetuating a systematic cover-up. The sheer scale of the crisis in that state — and hints that more allegations are yet to come — have made the past few weeks a watershed moment for the Catholic Church.

The Vatican has not yet confirmed or denied the letter’s authenticity, nor has the pope responded to the allegations. Earlier this week before the letter was published, Francis penned a 2,000-word letter to the congregation, apologizing for the Church’s failures to properly deal with abuse scandals.

Viganò’s letter comes as Pope Francis tours Ireland — another country hit particularly hard by clerical child sex abuse — for the World Conference of Families. His visit there has already proved controversial, with thousands of protesters attending anti-Pope rallies in Dublin.