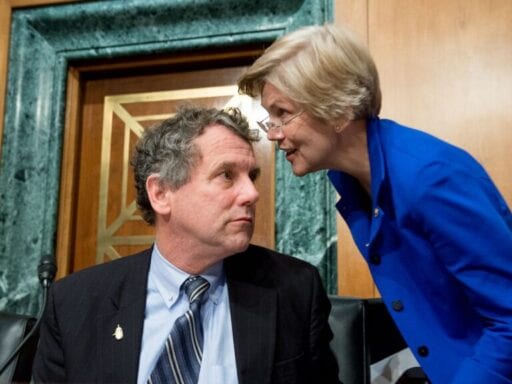 Share
Loading...
Elizabeth Warren and Sherrod Brown speaking during a Senate Banking Committee hearing on Capitol Hill in January 2015. | Photo by Andrew Harnik for The Washington Post via Getty Images

Congress has an opportunity to go big in the next coronavirus package, including protecting people from being crushed by debt.

The $1,200 stimulus checks from the government have quite a loophole. Banks and loan sharks can seize the money before it lands in your account — a wrinkle that favors debt collectors over the vulnerable people the checks are supposed to help.

Sens. Elizabeth Warren (D-MA) and Sherrod Brown (D-OH) are calling for Congress to put a stop to it in the next coronavirus package out of Capitol Hill.

The plan is part of a broad set of proposals, shared exclusively with Vox, that the pair of senators are releasing on Tuesday to help consumers manage debt — be it mortgages and rents, student loans, credit card debt, or auto loans — during the coronavirus crisis and accompanying economic downturn.

“Consumer spending drives our nation’s economy, and we will emerge from the current crisis,” the pair wrote in their proposal. “But if Americans are left drowning in debt at the end of it, our recovery will be hampered as people will spend less on goods and services.”

Millions of Americans were already in dire straits before the global pandemic hit, and millions more have been sent into a spiral. Roughly 22 million people have filed new jobless claims over the past month, and as economic shutdowns across the country continue and unemployment systems catch up, that number is likely to go up. And America was already heading into the crisis deeply indebted: US household debt hit a record $14 trillion in 2019.

The pair of senators are laying out six proposals to address that reality, building on the limited protections enacted in the Coronavirus Aid, Relief, and Economic Security Act, or CARES Act, last month. Some — like not letting creditors take people’s relief checks — address the first law’s oversights. Others — like broadly canceling student debt — are long-standing progressive goals. And still others are a decidedly Warren-esque response to the crisis the United States is facing, like ramping up the Consumer Financial Protection Bureau (the CFPB)’s oversight.

To be sure, these proposals might not go far enough to protect people — the lawmakers even acknowledge that families will probably wind up filing for bankruptcy, whatever happens. And that’s if they make it into law. Republicans have long been skeptical of the CFPB’s mere existence and the idea of being too lenient on debt. Some in the GOP have accused Democrats of exploiting the current crisis to push forth a progressive agenda. And even within the Democratic Party, not everyone is aligned on issues such as student debt cancellation. Warren and Brown, however, say now is the time for big ideas.

The CARES Act, the $2.2 trillion stimulus package signed into law in late March, provides some protections for consumers, but it could go further. For example, it entails a foreclosure moratorium and right to forbearance, meaning a pause on all payments, for federally backed mortgages. It also protects renters from eviction for 120 days, assuming they’re living in a building with a federally-backed loan or are part of specific government programs. But 70 percent of home mortgages are backed by a federal agency, meaning 30 percent are private and left out.

“So, while the government is making trillions of dollars available to large companies, Congress offered no relief for Americans with auto loans, credit card debt, payday loans, or other debt,” Warren and Brown write.

The pair lay out six proposals for Congress to include in the next coronavirus relief package, which is still being debated among Washington lawmakers:

They have proposed the Small Business and Consumer Debt Collection Emergency Relief Act with Sen. Cory Booker (D-NJ), which would extend debt protections to small businesses.

They outline a number of steps the CFPB can and should be taking, including financial institution examinations (even if not on-sight), data gathering and monitoring, and focusing on industries that can be particularly bad actors — debt collectors, mortgage servicers, and payday lenders. It also has enforcement powers. Warren and Brown aren’t the only figures sounding the alarm about the CFPB — earlier this month, former CFPB Director Richard Cordray warned of the threat coronavirus poses to consumers and called on the bureau to step up.

We are in an unprecedented moment in America. The pandemic has brought the economy to a halt, and millions of people are hurting. Debt isn’t a personal problem, it’s a collective problem — the system is set up so that ordinary people are at a disadvantage to powerful institutions. And once this is over, the worse shape people are in, financially, the longer the recovery will take. But Congress has an opportunity to go big in the next stimulus package, and proposals like this are how they’ll take it.