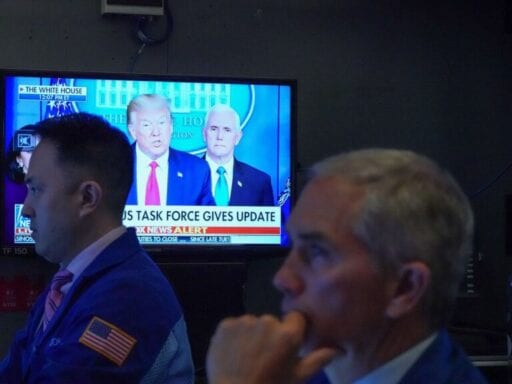 Share
Loading...
Traders on the floor of the New York Stock Exchange as President Donald Trump gives an update about the coronavirus situation in the US on March 18, 2020. | Bryan R. Smith/AFP via Getty Images

Goldman Sachs is warning its corporate clients that the coronavirus crisis has corporate raiders and private equity sharks circling, according to an internal email and client presentation viewed by Vox.

The pandemic has already sent a number of industries spiraling, including travel and hospitality, food, and oil. For an elite group of big investors, the pain signals that it’s a good time to look for opportunities to make money.

In an email to Goldman Sachs’ investment banking division sent on Tuesday and obtained by Vox, the bank said it expects to see an increase in hostile raids and shareholder activism as the prices of public companies fall. In other words, as the stock prices of public companies hit hard by the coronavirus plummet and the fear of the economic damage it might cause grows, private equity firms and activist investors are planning to buy into the companies and try to force changes.

Goldman encouraged employees to share with their clients a presentation about how to prepare for such a scenario. Namely, the presentation lays out shareholder rights plans (also known as “poison pills”), which are strategies companies use to defend themselves against hostile takeovers or being forced to take drastic measures, such as firing the CEO, giving up board seats, selling off parts of the company, or laying off swaths of workers. Shareholder rights plans often give existing shareholders the right to buy more shares at a discount so that they can dilute the ownership of a shareholder that might be plotting a takeover.

In other words, as millions of Americans and hundreds of companies face down a crisis, big investors with a lot of money to spend are looking at huge potential profits.

To back up a bit, you’ve probably been seeing a lot of headlines lately about stocks falling, which basically means the prices of a lot of publicly traded companies are getting lower. For your everyday retail investor, that may mean it’s a good time to buy (knowing that there’s always risk, of course). For private equity firms and activist investors, many of whom have plenty of cash on hand, it might really be time to shop. If there’s a company they’ve been eyeing for a while that’s suddenly at an enormous discount, now is the time to buy in huge.

Private equity firms, for example, have a ton of money to spend right now. As of last summer, the private equity industry had an estimated $2.5 trillion in “dry powder,” which is basically industry slang for money to spend. Private deal-making was already high when prices were up, and it may very well get even higher now. Firms might try to acquire companies through leveraged buyouts or outright in cash, and companies that want to resist the buyout might not be able to succeed. In other words, many companies will be vulnerable to a hostile takeover.

And then there are activist investors, individuals or groups that buy large proportions of companies’ shares and then try to force changes to make them more profitable. Most recently, you might have heard of Elliott Management’s activist play at Twitter, where the firm tried to oust CEO Jack Dorsey. Ultimately, the parties struck a deal.

For activists, the ultimate goal is a rise in share prices so that they can sell at a profit. If they’re buying low already because of the current situation, they’re already getting a deal. Then, either the price goes up with eventual recovery or they make changes to render the company more profitable (and then they make money).

Strategies for these types of investments can vary — sometimes they mean layoffs, sometimes they mean spinning off or selling a part of the company, sometimes they mean starting up something new. The ultimate goal is to make money, and that can translate to scenarios in which workers lose their jobs in the name of corporate speak like “efficiencies” and “streamlining.” That applies to workers even at the very top. “In both the activist fund case and the hostile takeover case, one commonality is that the CEO will fear for their job,” the Goldman associate said.

Orol noted that activist Carl Icahn had increased his position in oil and gas company Occidental Petroleum from 2.5 percent to 9.9 percent, an announcement Icahn made last Thursday. “The move suggests the billionaire raider is doubling down on a change-of-control proxy contest he has in the works at the oil and gas company,” Orol wrote. Basically, the CEO and board of Occidental Petroleum should look out.

Companies can try to defend themselves, but there are no guarantees

In its presentation, Goldman told clients that a shareholder rights plan, or poison pill, “is the single most effective takeover protection device but does not render a company immune from hostile takeovers.” In other words, they can try to keep private equity firms and activist investors at bay if they want (and if they have a choice), and they can try to prevent them from accumulating enough of their shares that they can’t fight back — but there are no promises.

The bank also lays out the advantages and disadvantages of such plans. On the plus side, they preserve the board’s flexibility and ability to evaluate alternatives if things get hairy, and they deter activists and private equity firms from “acquiring a position of substantial influence or control without paying shareholders a full and fair price.” On the downside, a lot of investors, even the small ones, don’t exactly love the idea of a board of directors or corporate leadership so isolated from shareholder pressure that they can do whatever they want. Mark Zuckerberg at Facebook, for example, is basically immune to shareholder pressure.

To be sure, whatever money private equity firms, activists, and other big investors are sitting on right now, or however much they’re pumping in, doesn’t guarantee a positive outcome. Their own investors — endowments, pension funds, the wealthy — may be pulling money out right now. And the companies they’re invested at the moment may also be hurting. But then again, it’s better to be a hedge fund manager or private equity partner right now than it is to be a restaurant worker who has been or is about to be laid off.

It’s also worth noting that advisers, including Goldman Sachs, are also making money. Its client presentation includes multiple slides of marketing material that note how the firm has previously helped companies defend themselves against raiders, including by keeping companies independent or delivering the “highest final premium” when a company was eventually taken over. “Goldman Sachs is the #1 Activism Defense Advisor” one slide reads. “Goldman Sachs has advised companies confronted by every major activist,” reads another.

Amid the coronavirus crisis in the world of finance, there might still be plenty of money to be made, Goldman included.

Doctors botch blood pressure readings more often than you think
What America can learn from the fall of the Roman republic
Alexandria Ocasio-Cortez is what the future of the left looks like
Was Russia’s 2016 intervention for Trump a strategic failure?
Working from home can make people more productive. Just not during a pandemic.
Eighth Grade’s R rating deters actual 8th graders from seeing it. What a shame.