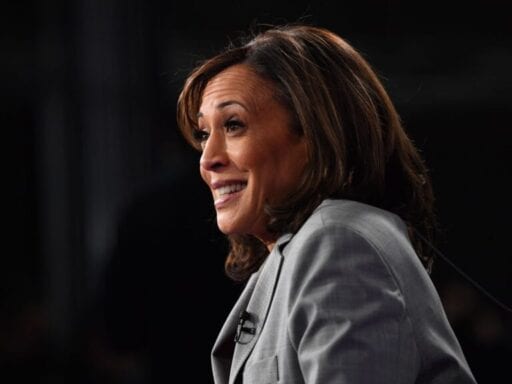 She is Democratic voters’ top choice for Biden’s running mate, according to a poll from SurveyUSA and FairVote.

Sen. Kamala Harris is Democratic voters’ top choice for Joe Biden’s vice president, according to a new poll provided in advance to Vox.

The survey contained both a standard poll and a ranked-choice poll, intended to find the candidate with a majority of voters’ support. (The sponsor of the survey, FairVote, is a nonpartisan electoral reform group, which advocates in favor of a ranked-choice system.)

When asked to select their pick for Democrats’ vice presidential nomination in a standard poll, 31.9 percent of all respondents chose Harris, 26.8 percent chose Warren and 16.7 percent chose Rice — wide enough gaps to overcome the survey’s 4.1-point margin of error, according to FairVote. When the poll was broken out by party affiliation, Harris was the top choice for Democrats, leading Warren 36 to 26 percent. Warren, meanwhile, led among independents, garnering 28 percent support to Harris’s 23 percent. (These figures omitted voters who were undecided about the VP pick.)

In the ranked-choice poll, voters were asked to rank several candidates in order of preference. Then, when their votes were tallied, if no candidate accrued more than 50 percent of the vote, the candidate who had the fewest first-choice votes was removed. Those votes then went to each voter’s next-ranked choice. This process was repeated until one candidate secured a majority of the vote.

When the final preferences of both Democratic and independent voters were counted in the ranked-choice survey, Harris emerged with 54.8 percent support, while Warren had 45.2 percent. (It’s worth noting that margin of error is trickier to calculate for ranked-choice polling, so there is more statistical uncertainty around this outcome.)

The ranked-choice poll, a process aimed at showing which candidates have broader bases of support, indicated that Harris and Warren are two of the possible vice presidential options who do. Both senators likely saw a boost from name recognition, since the two are far more well-known compared to the other candidates, following their respective presidential runs.

Still, the survey offers a glimpse of who some voters support — and indicates that Harris, who has fielded critiques of her prosecutorial background, is a popular choice. Biden is expected to announce his running mate later this month, and reports indicate he’s narrowed the list to a smaller pool that includes Harris, Rice, and Bass among the leading contenders. He’s also faced growing pressure to pick a Black woman for vice president, amid a nationwide movement to combat racism and police violence, and a push from many Democrats for a more representative ticket.

“Ranked choice voting polls add greater depth and voice to people’s preferences,” says FairVote executive vice president Khalid Pitts. “We can see which candidates have broad appeal outside of the first choices, which candidates are most divisive, and which candidates’ supporters are least likely to select a second choice. Standard polls miss these results.”

Walking through the results

Ranked-choice voting, a reform that has gained more support in recent elections, is aimed at ensuring that a broad spectrum of voter voices are considered. By factoring in voters’ second, third, and fourth choices, for example, votes for candidates who don’t end up doing well in a crowded field aren’t entirely “wasted.”

In this case, ranked-choice voting is more hypothetical, since former Vice President Joe Biden will be choosing the nominee that he sees most in line with his candidacy and the message he’d like to send, and voters won’t have a direct say. Previously, Biden has said he’s looking for a running mate who can govern from “day one” and who is “simpatico” with his approach to the office.

The ranked-choice poll nevertheless reveals which vice presidential candidates have more expansive voter support because it shows who people would prefer if their favored option was eliminated.

For this survey, this is how the ranked-choice results were calculated: Harris started off with 31.9 percent of voters picking her as their first choice, while Warren began with 26.8 percent and Rice, with 16.7 percent. Abrams and Duckworth were roughly tied with 8.9 percent and 8.7 percent support, respectively, while Demings had 3.9 percent and Bass had 3.3 percent.

After Bass, Demings, Duckworth, and Abrams’s support was redistributed, the polling left Harris with 40.1 percent, Warren with 37 percent and Rice with 22.9 percent.

Finally, when Rice’s votes were redistributed, Harris saw a bigger percentage bump, with 54.8 percent of the vote to Warren’s 45.2 percent.

Historically, the vice president choice has had little electoral impact: As Vox’s Ella Nilsen has written, the decision may only affect the final result if the running mate who’s chosen is particularly polarizing.

There are factors that make this cycle unique, however. Biden’s age — he’d be the oldest person ever elected president — and questions about whether he’ll pursue a second term have put more focus on the vice president pick.

Ultimately, Harris has the most support of Democratic voters in both the standard and ranked-choice poll, an indication that voters in the survey see her as a consensus pick for the role.

6 winners and 5 losers from the 2020 Oscars
Melania Trump’s changes to the White House Rose Garden, explained
How do you cover a presidential campaign during a pandemic?
This AI makes you look like a masterpiece — while teaching you about its own bias
Scientists: humans are rapidly turning oceans into warm, acidifying basins hostile to life
Uber’s HR chief steps down after reportedly ignoring racial discrimination complaints