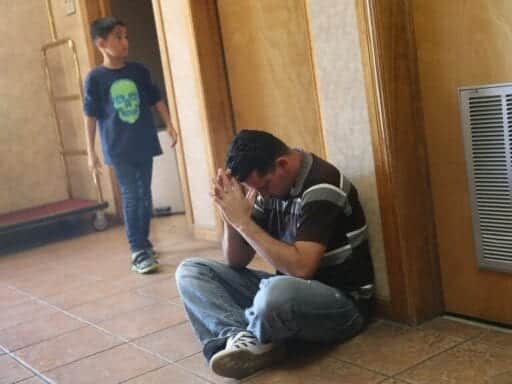 Hundreds of parents failed screening interviews for asylum while they were separated and traumatized. Now, dozens of them want a second chance to make their case.

The 38 parents, represented by Muslim Advocates, Eversheds Sutherland LLP, and the Legal Aid Justice Center, filed the case Dora v. Sessions Friday in the DC federal district. All of them have now been reunited with their children but have been given final deportation orders after losing their asylum cases.

Right now, the only thing saving them is a court order from a California judge preventing the government from deporting reunified families while children’s asylum claims are adjudicated. But that could be only temporary relief for the 1,000 parents who’ve already been ordered deported — many of whom tried to seek asylum but flunked their initial interviews because they weren’t able to persuade an asylum officer that they had a “credible fear of persecution” if returned to their home countries.

In theory — unless a judge intervenes — that means that the parents will absolutely get deported sooner or later, whether their children are ultimately granted asylum or not.

Because they failed their interviews, says Sirine Shebaya of Muslim Advocates, “the government has made clear that its intention is to deport these people as quickly as they possibly can.”

The allegations in the new DC lawsuit raise serious questions about how those interviews were conducted.

Lawyers representing the parents argue that it’s illegal for the government to reject an asylum claim based on an interview conducted while the claimant was so debilitatingly traumatized. They claim it violates procedural safeguards set out for people fighting deportation (even though those safeguards aren’t explicitly provided for asylum screening interviews) and violates their due process.

It could be an uphill legal battle: Federal judges are only very rarely allowed to overrule the government’s decision to deport someone. In other words, if the lawsuit fails, it may simply show that family separation has permanently ruined hundreds of lives — and, perhaps, doomed people to return to persecution the law is supposed to prevent.

Separated parents were clearly traumatized during their screening interviews

Under the Trump administration’s family separation policy, a parent who wanted to seek asylum in the US had one chance: to pass a “credible fear” screening interview with an asylum office.

Generally, most asylum seekers pass their credible fear screenings. But while family separation was in full effect early this summer, lawyers representing separated parents started noticing that a lot of their clients were failing. One lawyer estimated to the Huffington Post that half of her clients were failing their interviews. Another lawyer, Carlos Garcia, told Vox that barely any of the mothers he had seen had passed, despite the fact that “three months ago, I would have told you they would have shown credible fear.”

At the time, lawyers thought this might be partly due to an early-June ruling from Attorney General Jeff Sessions that sought to limit the grounds on which a victim of domestic or gang violence could qualify for asylum. But overall, the credible fear approval rate in June remained around 75 percent. Anecdotal evidence suggests that for separated parents, it was much lower.

The reason, to lawyers and psychiatrists, is obvious: Parents were being asked difficult questions — in an interview designed to recount the traumas they’d suffered in their home country and test their credibility — while totally consumed with the anxiety that came with not having seen their children in weeks.

“Explaining the basis for an asylum claim is very difficult under the best of circumstances,” said one source familiar with the interview process but not professionally authorized to speak on the record. Asylum seekers don’t immediately know how their experiences fit into the framework of protections set up by US asylum law: how to articulate membership in a “particular social group,” for example.

“When someone is a) detained, b) almost certainly unrepresented, and c) beside herself with fear and desperation because of having had her child taken from her,” the source continued, “it is almost impossible.”

The new lawsuit shows just how true this is. The lead plaintiff, given the pseudonym “Dora,” was interviewed right after she’d just spoken to her son for the first time after their separation — a conversation in which he’d told her he was being good so an official would not hit him with a belt. She was interviewed while crying over the phone call and repeatedly told the asylum officer she was confused about what she was being asked. Unsurprisingly, she didn’t pass.

Other parents describe being unable to answer questions about their own experiences in their home countries — the basis for their asylum claims — because all they could focus on was how they wanted their children to be safe. They tried to get through the interview as quickly as possible, in the hopes that they could see their children sooner, rather than provide the complete answers needed to formulate a solid asylum claim.

One parent remembered an interview as lasting mere minutes when records showed it was more than an hour. Another told lawyers afterward that she didn’t remember anything she was asked or the answers she gave.

Even the most sympathetic asylum officer might have trouble with such a case. One asylum officer who spoke to Vox anonymously reported their own experience with a separated father: “The one thing he really wanted was to be able to call his son on the son’s birthday,” the officer said. Being treated for insomnia and depression, “he spoke really slowly, as if he were half-asleep or drugged.” The officer approved his credible fear claim, but a less patient officer might not have been so lucky.

And many of the asylum officers depicted in the lawsuit were far less sympathetic. Multiple asylum officers insisted that parents respond to questions only with “yes” or “no” — making it all the easier for a parent to give the “wrong” answer to a question they didn’t understand. And ICE agents in the facilities where they were held told some parents that if they dropped their cases, they’d be able to see their children again more quickly.

A psychiatrist who evaluated some separated parents after their interviews concluded that they suffered from acute stress response. According to federal law, the lawsuit argues, the trauma of family separation counted as a temporary disability. (For that matter, if they’d never been separated from their children to begin with, they would have been allowed to conduct their screening interviews with their children in the room.) But they were evaluated — and denied — as if they’d had all the time in the world to prepare and nothing else on their minds.

Lawsuits over family separation have already hit the federal government from several angles. But what makes this case unique is also what’s going to make it legally tricky: It’s focused squarely on the deportation orders that have already been issued to parents (rather than preserving due process going forward for children who haven’t yet been ordered deported).

Generally, federal judges simply aren’t allowed to review or overrule the government’s decision to deport somebody. There are only very limited cases where judicial review is appropriate. The plaintiffs in this case argue that the government’s policies for dealing with separated families count as one such ground: a “written policy directive, written policy guideline, or written procedure” that is in violation of federal law. The Trump administration is all but certain to fight against that characterization tooth and nail.

Furthermore, even if the DC District agrees that this case qualifies for such an exemption, it will only benefit these 38 families directly — at least at first. The exemption explicitly prevents class-action lawsuits.

So even in a best-case scenario, where the plaintiffs get everything they want — their deportations stalled and their interview denials vacated, with new interviews in which they’re given the safeguards that are generally given to mentally incompetent people in full hearings before an immigration judge — there are still hundreds more parents who might be in the same circumstances but could still face imminent deportation. Those parents would have to get themselves added, individually, to the DC lawsuit, or sue under it for their own cases to be reopened.

It’s extremely unlikely, in other words, that this lawsuit will do everything it wants to do: prevent the government from removing anyone based on an interview they were too traumatized to pass. It will be impossible to say, for sure, that no one was deported as a result of family separation who had a legitimate claim to asylum, or that no one was deported back to danger.

This is already hard to guarantee in asylum proceedings, Shebaya says. “It’s widely known that asylum seekers typically already arrive with a baseline level of trauma.” Family separation compounded that. And instead of becoming a reason for asylum seekers to get relief in the US, the trauma imposed by the US government may inexorably lead to their deportation.

Thursday’s historically bad economic growth numbers, explained
Facebook employees are not as happy with Mark Zuckerberg as they used to be
In Charlie’s Angels, Kristen Stewart makes a case for herself as our new Hollywood Chris
A warning sign for House Republicans in 2018: Democratic challengers are out-fundraising them
An Australian ecologist explains just how bad the fires are for wildlife
Rep. Anthony Brown on how Trump could heal America, and why he won’t