Exclusive: We re-ran polls from 1991 about Anita Hill, this time about Christine Blasey Ford 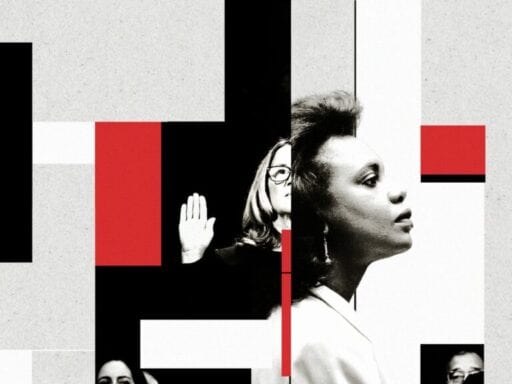 A lot has changed. But one big thing hasn’t.

In 1991, 67 percent of Americans surveyed told pollsters that if Anita Hill’s accusation of sexual harassment was true, it should sink Clarence Thomas’s nomination to the Supreme Court. Twenty-seven years later, a nearly identical percentage, 69 percent, of Americans said that if Christine Blasey Ford’s accusation of sexual assault was true, it should sink Brett Kavanaugh’s.

That’s one of the findings from a new poll produced in partnership between Vox and the Elections Research Center at the University of Wisconsin, with data gathered by YouGov.

Between September 29 and October 1, the survey asked Americans six questions identical to the ones that pollsters fielded in the days after Hill’s Senate Judiciary Committee testimony. The only changes to the questions were the names — Ford’s was substituted for Hill’s and Kavanaugh’s for Thomas’s. (Both Thomas and Kavanaugh have denied the allegations against them.)

The survey aimed to gauge how much attitudes have changed (or not changed) about sexual misconduct allegations against Court nominees and to what extent those attitudes are shaping political opinions.

While more than two-thirds of Americans then and now say they disapprove of a man found to have engaged in sexual harassment or assault on the high court, there are significant differences from 1991. The political stakes appear higher. Unlike President George H.W. Bush, who wasn’t penalized by voters for tapping Thomas, President Donald Trump has paid a price. About 42 percent of respondents say they’ve lost confidence in Trump because of his choice of Kavanaugh, while only 30 percent lost confidence in H.W. Bush (the same share as those who gained confidence in him).

The Hill-Thomas hearings took place a year before a midterm election, unlike the Ford-Kavanaugh hearings, which took place five weeks before Election Day. It’s harder to draw a comparison, given the timing of the polls. But we know that the current survey suggests that senators who support Kavanaugh are most likely to be rewarded by voters.

Vox and the Elections Research Center tried as best we could to copy the exact wording of the poll questions we replicated. But because YouGov is an online polling company, and most of the Thomas/Hill polls we replicated were conducted by phone, there is a significant difference. The phone polls enabled respondents to say they were “not sure” or “didn’t know,” an option that doesn’t exist on YouGov’s web platform. Our poll reached 1,000 Americans, and the results were weighted by race, age, gender, education, and 2016 presidential vote to enhance their representativeness.

To ensure as close a comparison as possible, Elections Research Center’s Burden recalculated all the early 1990s polling with “not sure” responses excluded. Unless otherwise indicated, those are the numbers reported in this article.

Question 1: “All in all, do you approve or disapprove of the way the Senate handled the confirmation hearings?”

The public’s view of national politicians appears dimmer now, and public attitude toward the Kavanaugh hearings is slightly more negative than toward the Thomas hearings.

In an October 1991 CBS News/New York Times poll, 68 percent of respondents said they disapproved of the way that the Senate had handled the Thomas confirmation hearings; only 32 percent approved.

Our poll found that 73 percent of respondents disapproved of the Senate’s handling of the Kavanaugh confirmation hearings, and 27 percent approved. The change was statistically significant. For the stats enthusiasts out there, the p-value for the difference between 1991 and 2018 is under 0.05, as determined by chi-squared test (for more on what that means, this piece by Vox’s Brian Resnick is a great primer).

Question 2: “As a result of the hearings, do you have more confidence or less confidence in the president?”

While the Thomas hearings didn’t appear to hurt approval for H.W. Bush at all, the Kavanaugh hearings have had a significant negative effect on our respondents’ views of Trump.

By contrast, we found that 42 percent of respondents say the Kavanaugh hearings have reduced their confidence in President Trump — 12 points more than the equivalent for Bush/Thomas. Smaller shares than in 1991 say they are more confident in Trump as a result of the hearings (24 percent), or that their confidence level is unchanged (34 percent). (The differences here are statistically significant at an even stricter (p < 0.01) level.)

Question 3: “Do you think [the nominee] did or did not receive a fair hearing before the Senate Judiciary Committee?”

While the hearings appear to have hurt Trump’s reputation, more people in 2018 feel that the embattled Supreme Court nominee failed to receive a fair hearing than thought the same in 1991. In that limited way, Kavanaugh has elicited more sympathy than Thomas.

Democrats were much more likely (80 percent) to say Kavanaugh got a fair hearing than independents (49 percent) or Republicans (33 percent). Accordingly, young and nonwhite respondents were likelier to think the proceedings were fair, and older/white people were less likely.

An NBC News/Wall Street journal poll from October 1991 found that 67 percent of respondents thought Thomas had received a fair hearing in the Senate; 33 percent disagreed. Our poll found that 55 percent of respondents think Kavanaugh has received a fair hearing, and 45 percent think he has not. The share who think the nominee got a raw deal has increased sharply, and the change is significant at a p < 0.01 level.

Question 4: “If one of your US senators voted in favor of confirming [Kavanaugh/Thomas] as a Supreme Court justice, would that make you more likely to vote to reelect that senator, less likely, or wouldn’t it make much difference in your vote?”

Several months after the Thomas-Hill hearings, in June 1992, ABC News and the Washington Post conducted a poll asking how the proceedings would affect voting behavior that fall.

That 1992 poll took place months after the hearings, and months before Election Day. Our poll was conducted right in the wake of the hearings, and little more than a month before Election Day. But with those points of difference noted, we found a public that professes to care deeply about the Kavanaugh-Ford hearings — and would hold a vote for Kavanaugh against their senator.

A mere 28 percent of respondents in 2018 say that a senator’s vote for Kavanaugh wouldn’t matter to them; that’s less than half the equivalent 1992 figure. 28 percent say a pro-Kavanaugh vote would make them likelier to support their senator, and 44 percent say that it would make them less likely. (The differences from 1992 are statistically significant at a p < 0.01 level.)

“In other words,” said Burden, “voters are much more likely to reward senators for supporting Kavanaugh.”

Question 5: “If a candidate for Congress in your district opposed the nomination of [Kavanaugh/Thomas] to the US Supreme Court, would make you more likely or less likely to support this candidate?”

We were not able to find a poll asking in October 1991, in the immediate aftermath of the Thomas-Hill hearings, how they would affect respondents’ Senate votes.

But the NBC News/Wall Street Journal poll from October 1991 did ask about how the hearings could affect votes for the US House. The respondents didn’t share the indifference that ABC News/Washington Post found in June 1992. Only 16 percent of respondents said that a candidate’s opposition to Thomas would “not make much difference.”

Our 2018 follow-up found more indifference (25 percent said it wouldn’t make much difference for their House vote), but a similar tilt against anti-Kavanaugh candidates. 36 percent of respondents said that they’d be more likely to back a candidate who opposed Kavanaugh, and 39 percent said they’d be less likely. The difference between 1991 and 2018 is, once again, statistically significant with p < 0.01.

As with the Senate results, this result changes significantly if the sample is restricted to voters. “Among nonvoters, almost half (46 percent) say that it wouldn’t make a difference. Among voters it’s only 19 percent,” Burden said. “The number of people saying it would make ‘much more’ difference is quite a bit larger among voters. The ‘much more likely’ group goes from 15 percent to 27 percent. The ‘much less likely’ goes from 15 percent to 31 percent.”

Or it could reflect incoherent views and a lack of careful attention on the part of voters. The latter seems likelier to me, as the difference between the House and Senate polls isn’t driven by more people saying the issue doesn’t matter in the House. It’s driven by the pro- and anti-Kavanaugh sides being more evenly matched in the House than in the Senate.

And, of course, how people say they’re determining their vote can differ from their actual thought process. Generic ballot and district-specific polls are probably a better predictor of the midterm results in the House than issue-specific polls like this. But our polling at least provides some evidence that voters are thinking about Kavanaugh, whether or not the issue winds up swinging votes.

Question 6: “If the charge is true, would that be enough of a reason for the Senate to reject his nomination, or not?”

The ABC News poll from October 1991, which we replicated, asked a narrower question: “If the charge [against Thomas/Kavanaugh] is true, would that be enough of a reason for the Senate to reject his nomination, or not?”

The answer might seem obvious, but some of Kavanaugh’s defenders have argued that he should be confirmed — even if guilty. The understandably pseudonymous Federalist contributor Soren Midgley has argued that “what we know about Kavanaugh’s record for the last 30 years of his life tells us the realized negative consequences would be minimal if he were actually guilty.” Washington Post columnist Megan McArdle has gone further, stating, “I would be cool with a teen murderer getting a lifetime appointment to the Supreme Court.”

Americans at large took a different stand in October 1991, and take a mostly identical one today. In both cases, a minority of 31-33 percent say that the allegations, if true, shouldn’t disqualify Thomas/Kavanaugh from the court, while 67-69 percent argue they should.

It’s easy, especially in the wake of the Harvey Weinstein revelations and #MeToo, to assume that the American public takes allegations of sexual harassment and assault more seriously than it did decades ago. And some parts of our survey confirm that, especially the findings that American voters think less of Trump and of senators who support Kavanaugh.

But in the crucial matter of whether a true accusation of sexual assault is important enough to derail a nomination, things haven’t changed much since 1991.

“It is the religiously conservative who are more tolerant of Kavanaugh possibly committing sexual assault and would still be willing to have him on the Court,” Burden said.

CNN's Chris Cuomo confronts Lewandowski over 'womp womp' remark
Turkey’s invasion in Syria is creating even more refugees — just as the US shuts the door
Trump is holding a rally in one of the country’s worst Covid-19 hot spots
How Ikea mastered the Gruen effect
Critical race theory, and Trump’s war on it, explained
Brit Bennett’s breathtaking The Vanishing Half is a dark fairy tale about passing for white