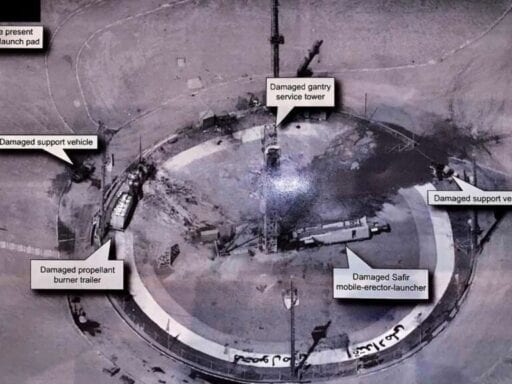 Trump tweeted what appears to be a classified image of a failed Iranian rocket launch, and said the US didn’t sabotage the effort.

President Donald Trump may have shared classified material on Twitter Friday, when he tweeted what appears to be a a surveillance photo from a US satellite or drone. While the president possesses the ability to declassify material at will, security experts warned that publishing the material could give adversaries valuable information about the US’ intelligence gathering capabilities.

The image shows the aftermath of a failed Iranian rocket launch; despite growing tensions between Iran and the US, Trump disavowed any American meddling in his tweet.

“The United States of America was not involved in the catastrophic accident during final launch preparations for the Safir [Space Launch Vehicle] Launch at Semnan Launch Site One in Iran,” the president wrote in a tweet that accompanied the image on Friday. “I wish Iran best wishes and good luck in determining what happened at Site One.”

The United States of America was not involved in the catastrophic accident during final launch preparations for the Safir SLV Launch at Semnan Launch Site One in Iran. I wish Iran best wishes and good luck in determining what happened at Site One. pic.twitter.com/z0iDj2L0Y3

Iran has been working on orbital launches for some time — the image Trump tweeted depicted the country’s third failed attempt at launching a rocket this year. The rocket, which Iranians hoped would carry a satellite into space, exploded on its launch pad at the Imam Khomeini Space Center in northern Iran, about 200 miles east of Tehran on Thursday.

The problem was a technical one, an unnamed Iranian official told Reuters. But the president’s tweet appeared to have come from a desire to make it clear that the incident was not linked to US military activity or sabotage. Iran had not publicly accused the US of interfering in the launch ahead of Trump’s tweet, and did not do so after; however, the US does in fact have a program that aims to sabotage Iranian missile development.

The US has also long denounced Iran’s space program as being a front for the development of ballistic weaponry development. Tehran has denied these claims, arguing that it would like to engage in scientific pursuits in space as other nations have done.

It is not completely clear where the image Trump shared came from. Security experts told NPR that, given the image’s angle and the time at which it was taken, it could have been taken by the USA-224 American spy satellite. Other experts believe the image actually came from a military drone.

Either way, such images are usually kept classified in order to occlude US intelligence gathering methods and capabilities. The CIA, the director of national intelligence, and the State Department referred questions to the White House when asked about the photograph by CNN, and the National Security Council declined to comment. A defense official told CNBC that the photograph was included in the president’s intelligence briefing Friday.

Trump refused to confirm whether he’d tweeted a photograph from his security briefing while speaking to reporters Friday before boarding Marine One; instead, he defended his choice to share the image.

“We had a photo, and I released it, which I have the absolute right to do,” he said.

When asked explicitly where the photograph came from, Trump said, “You’ll have to figure that one out yourself.”

Iran’s Information and Communications Technology Minister Mohammad Javad Azari Jahromi was dismissive of Trump’s tweet, and said it was a matter for Iran’s defense department to address.

“I have no idea about the Americans’ comment about Semnan space site and I think it is more appropriate that the respected minister of defense talk about this because it is within his realm of responsibility,” Azari Jahromi said.

And early Sunday morning, local time, Azari Jahromi tweeted out what many interpreted as a taunting message to Trump: a selfie with the telecommunications satellite, known as Nahid-1, that Iran was planning to launch into space.

Tensions between the US and Iran are growing

Tensions between the US and Iran have been running hot for months following the Trump administration’s launch of what it describes as a “maximum pressure” campaign on Tehran.

Relations between the two countries soured when Trump made good on his campaign promise of withdrawing from the multination Iranian nuclear deal that eased economic restrictions on Iran in exchange for that country suspending its nuclear program.

Pressure between the two nations has intensified throughout 2019 as the Trump administration has placed new sanctions and trade restrictions on Iran. In June alone, the US accused Iran of attacking ships in the Gulf of Oman (something Iran has denied); Iran shot down a US drone; and the US claimed it backed down from a planned military strike at the last minute, targeting Iranian computer systems instead.

Last month, the US sanctioned Javad Zarif, Iran’s foreign minister and one of the architects of the deal as US allies in the European Union (and fellow nuclear deal signatories) attempted to salvage the agreement. Continuing those efforts, French President Emmanuel Macron invited Zarif to the G7 meeting in Biarritz, France last week in an attempt to reconcile Tehran and Washington; Trump declined to meet with Zarif, according to the New York Times.

Following the US’ exit from the nuclear agreement, Iran renewed its commitment to building out its nuclear programs. That promise became a reality when Iran officially broke part of its commitment to the 2015 nuclear deal last month: As Vox’s Alex Ward reported, Iran began to stockpile more low-enriched uranium than the 660 pounds the nuclear accord allows. This could mark the beginning of a more advanced nuclear program within Iran in the months and years to come — especially if Iran can raise money for this program by selling its oil to Europe, thereby bypassing US sanctions:

The enrichment level of the uranium Iran has now — 3.67 percent — isn’t high enough to make a nuclear bomb. But Tehran said it could to start enrichment closer to weapons-grade level on July 7 if Europe doesn’t offer financial relief, which would significantly escalate the months-long standoff between the US and Iran by potentially putting the latter closer to getting a nuclear weapon (though Iran has never officially said it wants one).

There may be a way out of this mess, though. Zarif told IRNA that “if Europeans do what they have to do, our measures are reversible,” referring to Tehran’s efforts to get European nations to trade with Iran despite US sanctions imposed after Trump withdrew from the nuclear deal last year.

But if that doesn’t happen — and it’s unlikely, since the US would penalize European countries for doing so — then Iran may soon be on the path to having a much more dangerous nuclear program than in recent years.

Last week, Iranian officials told Reuters that while they are fully willing to come back to the table for a new nuclear deal, any renegotiation of the agreement Trump left would have to be far more generous to Iran’s nuclear ambitions than the original one: These officials said a new deal could not include restrictions on Tehran’s ballistic missile program or its uranium enrichment practices. Given the US wants to restrict both these things, it seems unlikely that the Trump administration would consent to those conditions, which means a new deal isn’t likely any time soon.

Experts at home have been critical of Trump’s tweet

In light of this ongoing international tumult, Trump’s decision to share the image of the failed rocket launch is provocative.

While Trump has said he wanted to make it clear the US had not sabotaged the Iranian launch, he also either purposefully or inadvertently demonstrated what kinds of intelligence the US is capable of gathering.

Imagery NPR shared of the launch Thursday was indicative of the kind of technology publicly available for monitoring and surveillance — it published images from a commercial satellite imagery company called Planet, in partnership with the Middlebury Institute of International Studies that simply showed a plume of smoke billowing from a recently-painted, blue launchpad.

The image that Trump shared was of higher quality, however. It revealed substantially greater detail, including a Farsi phrase written on the pad: “National Product, National Power.” A black rectangle in one corner of the image may have concealed the classification of the photograph.

Ankit Panda, an adjunct senior fellow at the Federation of American Scientists specializing in satellite imagery, told NPR that the tweet reveals “some pretty amazing capabilities that the public simply wasn’t privy to before this.”

Nuclear expert Joshua Pollack told CNBC, “This will have global repercussions,” giving the US’ adversaries valuable insight into the capabilities of its intelligence gathering technology, and called Trump’s decision to tweet the photo “so reckless.”

The experts fear that by studying the image, Iran and other actors might now be better able to obscure their activities — particularly any nuclear activities — from the US.

Trump, however, was unconcerned Friday.

“We’ll see what happens,” he said.

Tulsi Gabbard calls Hillary Clinton “the queen of warmongers” in her latest clash with top Democrats
China’s puppet in Hong Kong
States plan to sue over family separation
Trump vilified socialism in his State of the Union, using Venezuela as his foil
Democrats’ impeachment dilemma, explained
9 key questions about the longest government shutdown in history, answered