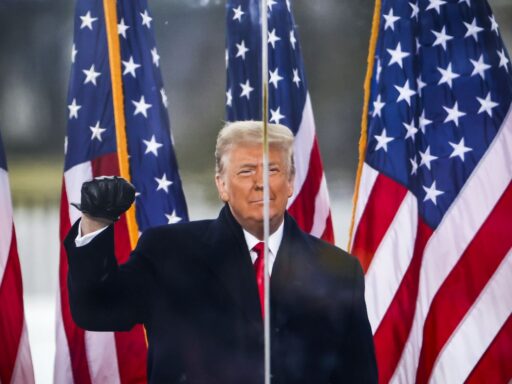 Facebook has taken its most significant action against Trump yet, two weeks before the end of his presidency.

Social media companies are grappling with the reactions to the insurrection that broke out on Wednesday at the US Capitol. Despite plenty of time and warning, Facebook, Twitter, and YouTube still seemed to be scrambling in their response to President Trump’s calls for an uprising in the wake of his election loss. In the aftermath of the Capitol violence, Twitter and Facebook are now implementing some of the toughest measures yet to limit Trump’s reach.

Twitter took the unprecedented action of locking Trump’s account for 12 hours — a period that will begin after Trump goes into his own account and takes down the tweets that violate its policies — and said it would suspend his account if the president, who has nearly 90 million followers on the platform, violated its rules on civic integrity or violent threats again. Following Twitter’s decision, Facebook announced that it would also implement a temporary ban and prevent Trump’s page from posting on the platform for 24 hours.

On Thursday, a Twitter spokesperson confirmed that the violating tweets had been deleted from inside the president’s account, which could mean that Trump is on track to have his ability to tweet restored.

Just minutes later on Thursday, Facebook’s CEO Mark Zuckerberg announced that the company would be indefinitely suspending Trump’s ability to post on the platform. Zuckerberg said that Trump would be barred from posting on Facebook and Instagram for at least the next two weeks, the remainder of his presidency.

“We believe the risks of allowing the President to continue to use our service during this period are simply too great,” Zuckerberg wrote. “Therefore, we are extending the block we have placed on his Facebook and Instagram accounts indefinitely and for at least the next two weeks until the peaceful transition of power is complete.”

The move marks the most significant action Facebook has ever taken against Trump. At the time of the update, a Twitter spokesperson could not comment on whether that platform still planned to restore Trump’s account.

Beyond that, Facebook, Twitter, and YouTube have also used the tools they’ve used in the past to handle sensitive events more proactively: adding labels, taking down posts that violate their rules, and elevating content from authoritative sources. But with insurrection happening at the Capitol, it seems that, in the final days of the Trump presidency, the platforms still aren’t effectively clamping down on his misinformation or his attacks on US democracy. Before Twitter and Facebook suspended Trump’s ability to post, many prominent figures in tech and politics called on the companies to suspend Trump’s social media accounts altogether because of his continued incitement of violence.

In a statement on Wednesday afternoon, Facebook condemned the protests at the Capitol and said that “incitement and calls for violence” are banned on the site. Notably, Facebook was criticized vociferously after the platform left up a post from Trump that said “when the looting starts, the shooting starts” amid the 2020 protests over the police killing of George Floyd.

Trump has an immense megaphone on Facebook, where he has more than 35 million followers. In the hours before the violence, one of the most-engaged posts on the platform was one from Trump encouraging his supporters to come to Washington, DC, on Wednesday, stating that the city “is being inundated with people who don’t want to see an election stolen,” according to the Facebook-owned tool CrowdTangle. The post included a label directing people to a page about election integrity on the Bipartisan Policy Center website, which is similar to the labels that Facebook applied to several of Trump’s recent posts.

The election integrity label was also applied to a video uploaded to Trump’s Facebook page as the insurrection was still unfolding on Capitol Hill. In it, Trump urged calm, but he repeated his false claims of a stolen election. Facebook took the video down just a couple hours after it was uploaded, but not before it had been viewed more than 2.7 million times.

A Facebook spokesperson also told Recode that it took other actions to quell disruption, including limiting the circulation of content Facebook predicts could violate its community standards and blocking the hashtag #StormTheCapitol. The spokesperson added that the company is in contact with law enforcement.

After those enforcement decisions, Facebook changed course again and announced its temporary ban on posting to Trump’s page. “We’ve assessed two policy violations against President Trump’s Page which will result in a 24-hour feature block, meaning he will lose the ability to post on the platform during that time,” the company said in a statement posted to Twitter.

In a statement posted to its platform on Wednesday afternoon, Twitter said calls to violence are against its policies and that the company is reducing engagement on tweets that could increase the risk of violence. Twitter added that it is exploring other “enforcement actions” to respond to the ongoing events at the Capitol. Later on Wednesday afternoon, Twitter took the rare action of deleting two of Trump’s tweets, including one falsely claiming that the election was “viciously stripped away” from him and one encouraging the rioters.

“In regard to the ongoing situation in Washington, D.C., we are working proactively to protect the health of the public conversation occurring on the service and will take action on any content that violates the Twitter Rules,” a tweet from the Twitter Safety account stated. “Threats of and calls to violence are against the Twitter Rules, and we are enforcing our policies accordingly.”

Several recent tweets posted by President Donald Trump at one point carried labels, which varied in severity. One post, in which Trump disparaged Vice President Mike Pence — and continued to call the US presidential election fraudulent — had a Twitter label stating this “claim of election fraud is disputed.” Users could no longer like, retweet, or comment on the tweet, though it can be quote tweeted, which allows users to retweet if they add their own commentary.

While a quote tweet allows people to provide their thoughts on what a public figure says, many of the quote tweets of Trump’s posts echo the president or his talking points, or criticize Twitter.

YouTube also took down the video of Trump addressing rioters, as well as several other videos that either promoted violence or included people carrying firearms.

“Our teams are working to quickly remove livestreams and other content that violates our policies, including those against incitement to violence or regarding footage of graphic violence,” Farshad Shadloo, a spokesperson for YouTube, told Recode, adding that the company is also amplifying authoritative sources on its homepage, in search results, and in recommendation letters.

On Parler, a small and largely unmoderated social media platform with a heavily conservative user base, there is significant discussion of the situation at the Capitol. The platform did not respond to Recode’s request for comment before publication.

Calls for platforms to do more

Many people — including prominent members of the tech and civil liberties communities — are criticizing these social media companies for not going further in limiting violent rhetoric.

Chris Sacca, an early Twitter investor, wrote that Twitter CEO Jack Dorsey and Facebook CEO Mark Zuckerberg have blood on their hands for allowing people to “incite violent treason” on their platforms, and called on the leaders and their employees to “shut it down.”

You’ve got blood on your hands, @jack and Zuck. For four years you’ve rationalized this terror. Inciting violent treason is not a free speech exercise. If you work at those companies, it’s on you too. Shut it down.

There have been good arguments for private companies to not silence elected officials, but all those arguments are predicated on the protection of constitutional governance.

Twitter and Facebook have to cut him off. There are no legitimate equities left and labeling won’t do it. pic.twitter.com/Nji6A4sJum

Social media platforms like Facebook and Twitter have long argued that they have a responsibility to defend open communication on their platforms, even when it can be politically contentious. And in the rare cases where these companies have taken more extreme measures — such as when Twitter blocked a New York Post article containing disputed claims about Hunter Biden or Facebook’s removal of a Trump post containing false claims about Covid-19 and children — those actions have been met with sharp criticism from conservative politicians and some free-speech advocates.

But Wednesday’s events represent a serious test of whether incremental restrictions like a warning label go far enough, particularly in the scenario of a sitting president using social media to encourage a violent assault on US democracy.

And somehow, despite the fact that social media companies have had years to prepare for this moment, and plenty of warnings that today in particular could be a violent one, they still appear indecisive and unprepared to handle the situation.

Update, January 7, 11:07 am: This story was updated to note that Facebook has extended its ban on Trump’s accounts.