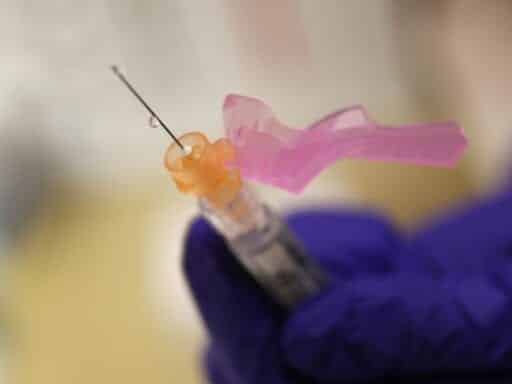 Share
Loading...
We don’t actually know how big a contributor social media is to the anti-vaccine problem, or whether it’s changing people’s behaviors and causing them to turn away from immunizations. | Joe Raedle/Getty Images

But it’s not clear how much influence social media has over parents refusing vaccines for their kids.

Facebook is changing how users see vaccine content — part of an ongoing effort by social platforms to correct, block, and minimize vaccine misinformation amid a record measles outbreak.

On Wednesday, the social media giant, which owns Instagram, announced a new vaccine information pop-up. Whenever users happen upon a page or profile with vaccine-related content, they’re shown a window that connects them to credible vaccine data (the US Centers for Disease Control and Prevention for US-based users and the World Health Organization for international users).

The move follows Facebook’s previous actions to limit anti-vaccine hoaxes on its network, and blocking of anti-vaccine hashtags, such as #VaccinesCauseAutism and #VaccinesArePoison, on Instagram.

Even Pinterest, typically a place for home and wedding inspiration, is now trying to make vaccine misinformation less prominent. Last year, the platform barred searches for any vaccine content, recognizing that its vast user base of moms was accessing misinformation on the platform. Then in August, Pinterest began displaying only results from credible public health organizations, including WHO and CDC.

YouTube has also announced it’s no longer allowing users to monetize anti-vaccine videos with ads, in the hopes that it will disincentivize the people who create them.

These changes are encouraging for one reason: Misinformation about vaccines can be dangerous. And a crackdown by some of the world’s tech giants, which all have millions of users, might mean fewer people are exposed to anti-vax information, and maybe fewer parents will decide to shirk lifesaving shots for their kids.

But it’s probably unrealistic to expect that Facebook or Pinterest will eliminate anti-vaccine sentiment, and there are reasons to be skeptical of their approaches. While it’s popular to blame YouTube and its ilk for every social evil, it’s not actually clear that these platforms are emboldening vaccine denialism in a significant way. And there are better proven ways to boost immunization rates — but they involve more systemic fixes than just stamping out erroneous pins and Facebook posts. Here’s why.

In order for immunizations to prevent diseases and protect people who can’t be immunized (such as newborn babies), we need a certain threshold of the population to be vaccinated to achieve what’s known as “herd immunity.” For a super-contagious virus like measles, nearly everybody who can get immunized needs to be.

When that threshold drops, vaccine-preventable disease outbreaks are inevitable — and we know vaccine refusers have helped spark recent outbreaks. But what we don’t know is how much misinformation on social media is truly fueling vaccine skepticism, and whether it’s changing people’s behaviors and causing them to turn away from immunizations.

“The conversation around vaccines emphasizes social media more than the evidence can support,” Brendan Nyhan, a professor of public policy at the University of Michigan who studies vaccine misinformation, told Vox in March. “Would parents come up with some other reason not to vaccinate their kids [without misinformation on social media]? We don’t know.”

That’s because the major social platforms — including Facebook, Instagram, and Pinterest — won’t share their user and engagement data with independent researchers. So researchers like Nyhan haven’t been able to study the link between exposure to fake vaccine news online and changes in people’s vaccine-seeking behavior.

At the Atlantic, journalist Alexis Madrigal found a clever workaround — and discovered that the “actual universe of people arguing about vaccinations [on Facebook] is limited and knowable.” Using the social media monitoring tool CrowdTangle, Madrigal analyzed Facebook’s most popular vaccine posts since 2016 and discovered it’s actually a small cluster of pages that generates most of the vaccine misinformation. Also, science-based pages are just as likely to go viral. Here’s Madrigal:

While there is no dearth of posts related to vaccines, the top 50 Facebook pages ranked by the number of public posts they made about vaccines generated nearly half (46 percent) of the top 10,000 posts for or against vaccinations, as well as 38 percent of the total likes on those posts, from January 2016 to February of this year. The distribution is heavy on the top, particularly for the anti-vax position. Just seven anti-vax pages generated nearly 20 percent of the top 10,000 vaccination posts in this time period: Natural News, Dr. Tenpenny on Vaccines and Current Events, Stop Mandatory Vaccination, March Against Monsanto, J. B. Handley, Erin at Health Nut News, and Revolution for Choice.

So it’s possible that anti-vax content may not be the major contributor to vaccine hesitancy that we think it is. And if that’s true, stamping out fake vaccine news won’t have much of an impact on vaccination rates.

The anti-vaccine empire is much broader than social media

There’s also the off-platform anti-vaccine information to deal with — what Baylor College of Medicine infectious diseases researcher Peter Hotez calls “the anti-vaccine media empire.” It consists of nearly 500 anti-vaccine websites, according to a recent estimate. There are also hundreds of books and documentaries.

The anti-vaccine film Vaxxed, directed by the discredited vaccine-autism fearmongerer Andrew Wakefield, got outsize attention when Robert De Niro touted it at the 2017 Tribeca Film Festival. Now Vaxxed II will be coming out soon.

These films and popular books have helped fan the flames of vaccine hesitancy. Parents who’ve decided to delay and avoid vaccines told me they were persuaded by Vaxxed, as well as The Vaccine Book, which suggests parents create their own selective vaccine schedule and consider skipping some shots. The Vaccine Book and other skeptical tomes (such as Vaccines: A Reappraisal) also happen to rank among Amazon’s best-selling books on vaccines.

Hotez would like to see Amazon hire a chief science officer to vet books for their potential public health impact. He’d like to see Google and other search engines address how vaccine information shows up in searches. He’d also like more pro-vaccine advocacy on the part of government — something that isn’t happening at scale right now, he said.

“We need a comprehensive public-private partnership between the US government and all the major stakeholders — Facebook, Amazon, Google — to look at dismantling the anti-vaccine empire,” he told Vox in March.

The moves by the tech giants are also one-offs that can’t scale, Nyhan noted, since they “require manual interventions and subjective judgments.”

Right now, many states make it way too easy for parents to opt out of vaccines on behalf of their children. As I recently wrote, even though all 50 states have legislation requiring vaccines for students entering school, many states still allow exemptions for people with religious or personal beliefs against immunizations.

Getting a lifetime exemption for a child can be as easy as writing a letter and having it notarized. And if that’s too much trouble, there are other loopholes one can take advantage of. For example, in most states, even without an exemption, kids can be granted “conditional entrance” to school on the promise that they will be vaccinated, but schools don’t always bother to follow up.

We have plenty of evidence, spanning more than a decade, showing that when you make it easier for parents to opt out of their shots, the rates of vaccine exemptions tend to be higher. The most recent analysis of US vaccine policies, published in 2018, found that states allowing both religious and philosophical exemptions — as 17 states currently do — were associated with a 2.3 percent decrease in measles-mumps-rubella vaccine rates and a 1.5 percent increase in both total exemptions and nonmedical exemptions.

Mississippi and West Virginia — which have long had the strictest vaccine laws in the nation — also have among the highest vaccine rates. In California, which barred nonmedical exemptions in 2015 and closed its “conditional entrance” loophole, vaccine coverage rates have been going up.

For now, the percentage of people seeking nonmedical exemptions in the US has been creeping upward, from 1.1 percent in 2009-’10 to 2.2 percent by 2017-’18. It’s still a minority of people who skip vaccines — but that average hides clusters across the country where nearly 30 percent of parents are opting out of vaccines. When someone brings a vaccine-preventable disease into those communities, we’ve seen devastating results: outbreaks that put public health at risk, cost millions of dollars to stamp out, and distract from other important public health programs.

The new actions by Big Tech could have some positive influence. But we have no evidence that they will. The solution to sustaining vaccination rates has to encompass more than social media — it has to be a priority for state governments around the country. If we want to stop vaccine-preventable outbreaks, we probably need something mightier than even Facebook. We need to close states’ vaccine loopholes.