“Failed” abortions, a period-tracking spreadsheet, and the last clinic standing: the controversy in Missouri, explained 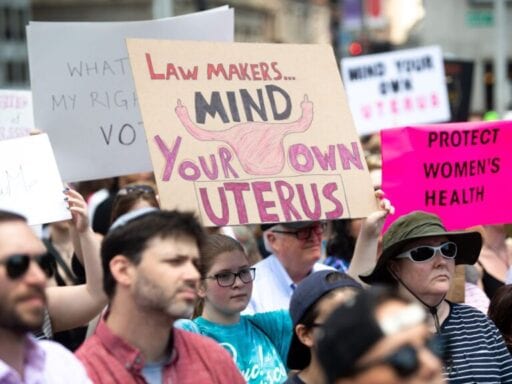 Share
Loading...
Demonstrators march in support of Planned Parenthood and abortion rights in St. Louis, Missouri, on May 30, 2019. | AFP/Getty Images

Hearings will determine if Missouri will be the first state without an abortion clinic.

At a hearing over an investigation of Missouri’s lone abortion clinic, a state official testified to something that has disturbed reproductive health advocates in the state and beyond: With the help of state medical records, his office had created a spreadsheet tracking patients’ menstrual periods.

The goal, according to the Kansas City Star, was to investigate “failed” abortions, instances in which the patient needed to return a second time to complete the procedure. The idea was apparently that, by gathering data on patients’ periods, state officials would know who was still pregnant after a scheduled abortion.

The testimony by Dr. Randall Williams, director of the Missouri Department of Health and Senior Services, came on Tuesday as part of a week-long hearing over whether the clinic, Reproductive Health Services of Planned Parenthood of the St. Louis region, will be allowed to keep its license to do abortions.

On Wednesday, the health department issued a statement to media blasting “false claims that Dr. Randall Williams tracks the menstrual cycles of women seeking abortions at Planned Parenthood.” However, the department acknowledged that officials had indeed created a spreadsheet to investigate failed abortions — it disputed only that Williams had requested such a spreadsheet.

The health department has held up the clinic’s license over concerns about “deficient practices,” and documentation of failed abortions appears to be one of those concerns. In its statement, the department acknowledged that officials used the spreadsheet to identify at least one instance where an abortion failed.

Abortion is “not only very safe, but it works very well,” Dr. Kristyn Brandi, a family planning specialist at Rutgers New Jersey Medical School and fellow with Physicians for Reproductive Health, told Vox. But as with any medical procedure, “there is a failure rate” — around 1 to 5 percent, depending on the procedure used.

At the St. Louis Clinic, four out of more than 4,000 patients who received abortions remained pregnant after the procedure, according to the data made public at the hearing. There’s no reason such a rate — less than one in 1,000 — should have concerned state officials, Brandi said: “It sounds, actually, like a quite safe facility.”

Failed abortions have become a focus of abortion opponents around the country in recent months, with President Trump and others claiming that infants are being born alive after abortion attempts and doctors are killing them (which experts say does not happen). But by using the narrative of abortion failure as an excuse to create a spreadsheet with patients’ periods, the health department is dragging their medical data into a larger effort aimed at shutting the clinic down, Planned Parenthood says.

“The frightening reality is, as the DHSS Director, Randall Williams has access to abortion reports, which in this case included information on menstrual cycles of Missouri women,” Bonyen Lee-Gilmore, director of state media campaigns at Planned Parenthood Federation of America, said in a statement to Vox. “To boil this down: He abused his power and misused patient information to push a political agenda against abortion.”

The news of the spreadsheet is just the latest in a conflict between the clinic and state regulators that Planned Parenthood says has been going on since Williams took office in 2017. The health department director had previously not said much publicly about his position on abortion but at the hearings this week, he said he is “pro-life,” the Star reported on Tuesday.

One of the clinic’s doctors told Vox that after Williams became director, health department officials said they had “reinterpreted” state regulations and found the clinic out of compliance.

In particular, the department said that an audit of the clinic this March had found “deficient practices” and since then officials have declined to renew the clinic’s license to perform abortions. The hearing this week will help determine whether that license can be renewed or whether the clinic will have to stop performing abortions. If so, it would make Missouri the first state without an abortion clinic since Roe v. Wade, the landmark 1973 Supreme Court decision establishing Americans’ right to the procedure.

The health department has not been clear about what “deficient practices” they found but the hearing on Tuesday offered some clues. Williams testified that the state found evidence of a failed abortion for which a required complication report was not filed with the state and decided to launch an investigation into other possible abortions after which a patient remained pregnant, the Star reported.

The goal appears to have been to use the data about periods to determine which patients, if any, were still pregnant when they went to follow-up appointments, indicating that the first abortion had not been successful. The investigators eventually found four such cases. This finding is what caused the health department to withhold the clinic’s license, according to the Star.

On Wednesday, the health department issued a statement to media disputing reporting by the Star and other publications that Williams himself had sought to track patients’ periods.

“As part of our initial inspection, a concern came up that DHSS may not be receiving complication reports for all failed surgical abortions, as required by law,” the statement read. “Without a directive from Dr. Randall Williams, regulators devised a means to efficiently investigate that concern using legally-obtained information which was required by law and which Planned Parenthood routinely submits.”

However, as the Star reports, the spreadsheet, obtained by Planned Parenthood through legal discovery, was titled “Director’s Request.”

However, the health department says that “Dr. Williams did not possess a spreadsheet of patient information, and although there was no wrong-doing by regulators, the first time he saw the spreadsheet was at the time of his deposition on Oct. 17.”

Whatever the case, the fact that Missouri state officials were analyzing patients’ period data has inspired shock and concern among many. “State law requires the health department director to be ‘of recognized character and integrity,’” Democratic state Rep. Crystal Quade told the Star in a statement. “This unsettling behavior calls into question whether Doctor Williams meets that high standard.”

Meanwhile, Yamelsie Rodriguez, president of Reproductive Health Services of Planned Parenthood of the St. Louis Region, called the news of the spreadsheet “deeply disturbing” in a statement to media. “Missouri’s top health official, Randall Williams, scrutinized menstrual cycles of women in this state in order to end abortion access,” she said.

The department has long publicly maintained that its investigations of the clinic have been about patient health and safety, and abortion opponents send a similar message.

“State officials trying to protect women’s health have a difficult job because all that we know about negative outcomes of abortion in general or from any specific location are what they choose to tell us,” Kristan Hawkins, president of the group Students for Life, told Vox in a statement. She called for a “national abortion reporting law” to make more data on abortions available.

Others, however, question why state officials would need to keep data on patients’ menstrual periods.

“I don’t know why people would be keeping track of these things other than trying to use public health or regulation to try to manage people’s bodies,” Brandi said.

The Missouri health department isn’t the only government office to keep data on patients’ periods in recent years. Officials from the federal Office of Refugee Resettlement (ORR), which is charged with caring for unaccompanied, undocumented minor immigrants, kept a spreadsheet of data on pregnant minors, including, in some cases, the dates of their last menstrual periods, according to documents obtained by the progressive group American Bridge. The spreadsheet, reproductive health and immigrants’ rights advocates say, was part of a larger effort to block these minors from getting abortions.

Scott Lloyd, the former director of ORR, has denied that the office tracked minors’ periods and said the entries on menstruation on the spreadsheet “appear to be early attempts by field staff at dating the gestational age of unborn children in our care.”

Thread: “Scott Lloyd’s admission from earlier this year that he had tracked the menstrual cycles of migrant girls and women in U.S. custody” https://t.co/aQE1jZReOt@agentlover @NYMag This never happened. It is not true and to assert otherwise is defamatory. 1/3 pic.twitter.com/6V5cEw4klv

But Rodriguez said in her statement that the Missouri health department spreadsheet “shadows the Trump administration’s history of tracking the periods of refugee girls under the government’s care.”

Missouri officials also aren’t the first to express concern over “failed” abortions. After Virginia Gov. Ralph Northam made confusing comments about an abortion bill in his state earlier this year, President Trump began making the claim that abortion doctors were executing infants after birth. “They wrap the baby beautifully, and then the doctor and the mother determine whether or not they will execute the baby,” he said at a rally in April.

And in the Senate, Republicans held a vote in February on the Born-Alive Abortion Survivors Protection Act, which would require doctors to provide the same care to a baby born alive after a failed attempt at an abortion that they would provide to any child of the same gestational age. If they failed to comply, they could face five years in prison.

The bill didn’t pass, but its sponsors and other abortion opponents around the country have argued that such laws are necessary to protect babies who “are left to die” after failed abortions.

Others, however, point out that it is already illegal to kill a baby after birth and no abortion law allows that practice. Moreover, doctors say that circumstances in which a living baby is born after a failed attempt at abortion are vanishingly rare.

Even in cases where the procedure fails, though, it’s extremely unlikely for a baby to be born alive. Most abortions are done in the first trimester of pregnancy, when a fetus cannot survive outside the womb, and only about 1 percent are performed after 20 weeks’ gestation. In the case of Missouri, the health department’s concern appears to be not babies born alive but patients who remained pregnant after an abortion procedure. In that case, patients can get a second procedure to make sure the pregnancy is terminated.

“When I’m talking to my patients,” Brandi said, “I do tell them that there is a chance” that the procedure may not work. She always schedules a follow-up appointment “to make sure that everything is going well with them,” she said.

And for Brandi, as a doctor who provides abortions, the narrative around failed abortions in Missouri and elsewhere has been “heartbreaking” to read, she said.

“People are trying to use politics to get their message across in a way that makes it seem like doctors who are providing this care, and other medical professions as well, are not doing their job,” she said. In reality, “We care incredibly about our patients and want to make sure that the care that we provide is the safest possible and based on medical evidence and not politics.”

Installing air filters in classrooms has surprisingly large educational benefits
The escalating conflict between Bernie Sanders and Elizabeth Warren, explained
Air travel is a huge contributor to climate change. A new global movement wants you to be ashamed to...
Another chaotic week: How Trump scrambled to address border crisis
James Gunn’s firing shows we’re still living in the Gamergate era
The night the NBA suddenly stopped — and why it matters