“Fake milk”: why the dairy industry is boiling over plant-based milks 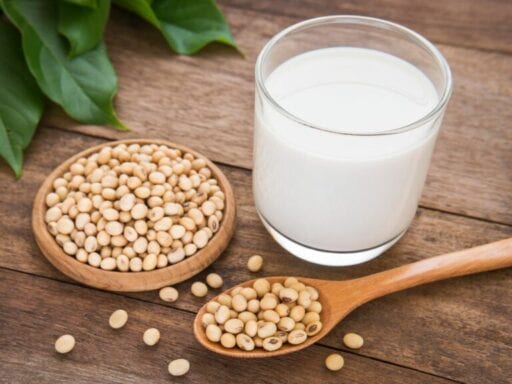 This droll observation was music to the ears of the $35.5 billion US cattle milk industry, which lately has been challenging the $1.6 billion plant-based milk industry’s right to use the word “milk.” Gottlieb seems to be sympathetic: His agency has proposed enforcing its own labeling rules for milk, which could prevent producers of almond milk and oat milk from continuing to use the term.

At stake are what the FDA calls “standards of identity,” legally-binding definitions of products to ensure consumers know what they are getting. In March, the FDA launched a strategy to update these standards “in light of marketing trends and the latest nutritional science.”

Milk has a complicated, jargon-filled standard of identity, but in short, the FDA says it is: “the lacteal secretion, practically free from colostrum, obtained by the complete milking of one or more healthy cows.”

The dairy industry has complained for almost 20 years that the FDA hasn’t policed this definition as products made from soy, almonds, cashews, rice, hemp, and oats have filled shelves in the dairy aisle. In particular, dairy producers argue plant-based milk producers are playing “fast and loose using standardized dairy terms” and that it’s unfair for them to do so because plant-based products don’t have the same nutritional profile or taste but nonetheless take advantage of the milk “brand.”

The dairy industry is now seizing this opportunity to sway a new FDA commissioner and a potentially friendly White House.

The fight over what to call white opaque beverages that don’t come from an animal also has implications for other plant-derived versions of animal products. Lab-grown meat is already facing its own naming controversies.

What’s clear is that any forthcoming federal action could bring some changes to the fortunes of food companies, animal or otherwise, as they gain or lose customers who respond to what’s on the label. But these shifts will be swamped in the Trump administration’s trade war, which will cascade throughout the entire US agriculture sector and portends bigger losses than any label can fix.

The milk-naming fight has been bubbling for years

Since nuts don’t have nipples, the FDA is well within its existing authority to deny the term “milk” to plant-derived products, according to farmers, who have been petitioning for this since 1997.

But the agency has not sent out any cease-and-desist notices to companies that use “milk” to describe beverages made from soy and other plants. Lawmakers have tried to force the FDA’s hand. In 2017, Sen. Tammy Baldwin (D-WI) introduced the DAIRY PRIDE Act (Defending Against Imitations and Replacements of Yogurt, Milk, and Cheese to Promote Regular Intake of Dairy Everyday Act) which would compel the FDA to enforce its milk standard of identity.

Courts are stepping in as well. The Ninth Circuit Court of Appeals is currently hearing a case over whether almond milk should be sold as “imitation milk.”

At the same time, the dairy sector has been facing mounting financial pressure. Milk producers have been losing ground in the United States while plant-based milk products have rapidly gained popularity. By 2016, plant-based milks had made it into one-third of US households, according to surveys.

What is milk, really? The dairy industry says there’s nothing like it.

Milk, according to food chemists, is a liquid combination of fat, protein, enzymes, vitamins, and sugar produced by mammals to nourish their offspring.

For dietary, ethical, or other reasons, many people don’t want to drink milk that comes from animals. But plant-derived milk products have different nutritional profiles and tastes. For example, Vitamin B12, which is required for brain function and is found in cow’s milk, is not found in plants.

In a study published last year in the Journal of Food Science and Technology, researchers reported that no plant-based milk product matches the nutrients provided by cow’s milk, but noted that soy milk was the most balanced in terms of nutrition. Other scientists have counseled caution in swapping cow’s milk for plant-based milk, particularly for children.

“Nondairy milk beverages vary in their nutritional profiles,” according to a 2017 paper in the Journal of Pediatric Gastroenterology and Nutrition. “These should not be considered nutritional substitutes for cow’s milk until nutrient quality and bioavailability are established.”

This is the crux of the milk industry’s argument for stricter labeling rules; consumers aren’t necessarily confused about where plant milk comes from, but the term “milk” evokes a nutritional profile that these milk alternatives don’t meet.

“When these products are properly labeled, they are not a substitute one-to-one for milk,” said Christopher Galen, a spokesperson for the National Milk Producers Federation.

The relevant analogy here is margarine, according to Galen. Though it imitates butter, it’s made from vegetable oil. That means it has a different variety and ratio of fats and proteins, so it can’t replace butter in some recipes. As a result, margarine makers can’t call it “butter” (though some manufacturers have found creative loopholes).

Peanut butter, on the other hand, isn’t pretending to be something else, so it gets away with using that name. It also has its own standard of identity.

Milk producers say that all they want is for the FDA to enforce the rules on the books so products made with soy, oats, or almonds can’t use the term as a descriptor on their packaging. Other countries already bar plant-based beverages from calling themselves milk (Muscle Milk is called Muscle Mlk in Canada).

Why now? Galen said that the appointment of Gottlieb as FDA director gave the industry an opportunity to revisit the issue. The number of milk-alternative products on the market has also vastly grown: Nondairy milk sales have soared by 61 percent in the last five years. And the prospect of lab-grown meat has added a sense of urgency for getting definitions right.

“Our organization has increased pressure on the FDA,” Galen said. “There’s so many more of these fake milks out there than there were 20 years ago.”

Jessica Almy, director of policy at the Good Food Institute, a nonprofit that promotes clean meat and plant-based alternatives to animal products, looks at it differently. She said that the standard of identity as written only applies to the unadorned word “milk.” Modifiers like “chocolate milk” have been allowed by the FDA. Barring plant products from using the term would prejudice regulators against one industry in favor of another, and it would violate the first amendment.

“It wouldn’t be a change in enforcement,” she said. “It would be a dramatic shift in policy for the FDA.”

The milk standard of identity refers specifically to “healthy cows” as the source, so milk from goats or sheep would not meet the definition of “milk” if the standard were enforced, according to Almy.

Animal-based milk products also have a variety of nutritional profiles depending on their fat content and whether they’ve been fortified with vitamins. So the criticism that plant-based milk products have different amounts of nutrients also applies to variations of dairy milk.

Should the rules be enforced, they would require manufacturers to re-label their products with names like “oat drink,” “soy beverage,” and “almond-based dairy-alternative.” Almy said this would likely confuse grocery shoppers for a while, but sales of plant-based milk products would still continue to grow.

Trump’s trade war is simmering underneath this debate

The dairy industry as a whole has been languishing in recent years. Demand for fluid milk in the United States has fallen by almost half since the 1970s and is projected to fall further. Dairy cattle herds are shrinking. Milk prices are falling. The country has a 1.39 billion-pound cheese surplus.

“Dairy farmers are feeling pretty beat up,” said Andrew Novakovic, a dairy markets and policy researcher at Cornell University. “The last three years have been pretty unkind to dairy.”

On top of all this, the Trump administration is waging a trade war as the dairy industry is desperately trying to secure foreign customers. About 10 to 15 percent of the US milk supply is sold abroad, including products like cheese and butter, and it remains one of the fastest-growing market sectors for dairy. Retaliatory tariffs from other countries could slice through these sales. “Doing anything that damages that relationship is going exactly in the wrong direction,” Novakovic said.

Though Trump has proposed tariffs on Canadian milk, the US dairy industry will only receive a small slice of the $12 billion aid package for farmers hurt by the administration’s trade policies, a total of $127 million.

But plant products are also going to be a casualty in the trade war. “Most agricultural analysts would agree that the agriculture sector that would be hit the hardest is soybeans,” Novakovic said. China is the largest export customer for US soy, including products like soy milk.

So both sides of the milk labeling fight are bracing for losses, but it’s unlikely that a decision in either direction from the FDA will make much of a difference to their balance sheets.

Still, Lindsay Moyer, a senior nutritionist at the Center for Science in the Public Interest, told Vox there is an important consumer protection issue at play: People still aren’t clear what all these beverages contain and what they mean for health. “The agency should prioritize public health and not the competitive or market concerns of any industry,” she said.

Rather than policing the term milk, Moyer said her group advocates nutrition disclosures that show what plant-based milk products contain and what they lack relative to milk. The goal is to help people understand how these beverages can fit into their diets and where they might fall short.

A Trump tweet revealed the absurdity of the legal case against Obamacare
What the IG report found
Okay, Google, how do I listen to Vox?
Imagining the nonviolent state
Hurricane Laura hits land as an “extremely dangerous” Category 4 storm
Vox Book Club, The Princess Bride, week 3: The perfect summer read comes to an end