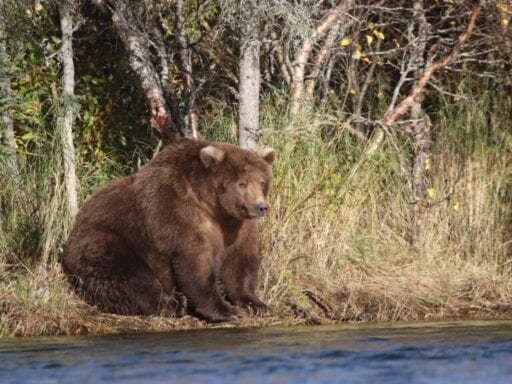 Share
Loading...
Katmai National Park’s bear 409 (a.k.a. “Beadnose”) won the 2018 competition for fattest bear. Sadly, she hasn’t been seen in the park this year and is not in the competition. | NPS Photo/A. Ramos

The park’s brown bears have been eating nonstop. Good.

America: There’s a lot going on right now. President Trump is facing possible impeachment for turning “American foreign policy into an extortion racket,” as Vox’s Zack Beauchamp put it. Meanwhile, the 2020 presidential primary is looming, the oceans are becoming hostile to life, and a recession could be around the corner.

What an anxious time to be alive!

It’s also a great time to take joy in a national treasure: The very good and fat bears of Katmai National Park in Alaska. Fat Bear Week is back, baby.

Over the past week, the employees of Katmai National Park have been asking people to vote, March Madness-style, on which bear has grown the fattest over the summer. The park has posted picture matchups of bear pairs on its Facebook page, and you, loyal citizen, get to choose which one looks fattest.

Tomorrow is the last day of voting.

The contest is narrowing down, and one more spot left in the final round to face up against the formidable fat bear named “Lefty.” Today’s semifinal is down to two “bodacious beauties,” as the Park’s Facebook page puts it.

Should Holly advance? (Use the image slider to see what she looked like in July versus September.)

(A bit on Holly: According to her National Park Service bio, Holly is famous for adopting an abandoned cub in 2015. “Adoption of cubs by bears is very rare,” the park describes. “Bears are generally selfish creatures who are not known for displays of altruism.” But yet Holly found it in her heart to take care of a lonesome cub.)

Or should it be Grazer?

(Grazer, also a female, is known for being “one of the most skilled bears to fish the lip of Brooks Fall,” the park notes. The male bears tend to get the best fishing spots. But Grazer compensates with skillful catching.)

Vote on Katmai’s Facebook page by “liking” the image of the bear you think ought to advance. The winner will be crowned on October 8 (or what the park calls “Fat Bear Tuesday.”) Full disclosure: I’m rooting for Holly. Just look at her.

Introducing the one, the only, the gloriously fat Holly – for your #FatBearWeek consideration. pic.twitter.com/h73njEYDp8

This yearly contest began in 2014, and every year it becomes even more of a viral sensation.

We’re sad to report that last year’s winner, Beadnose (see her chunky glory here), isn’t returning to the competition. As Mashable reports, Beadnose hasn’t been seen in the park this year. She was 20 years old — old for a brown bear. So it’s possible she died over the winter. “She’s lived a rich life, having raised four litters of cubs,” Mashable reports. Still, it stings. If she died, she went out on top, and that’s honorable.

Fat bear week is fun. But the science is also fascinating.

To be clear, this is not about fat-shaming, a press release from Katmai insists. It’s a celebration of life. “There is no shame in winning this contest as large amounts of body fat in brown bears is indicative of good health and strong chances of survival [over the winter],” the park says.

Every summer, hundreds of thousands of delicious, calorie-dense salmon swim up the Brooks River inside Katmai, a sparsely visited preserve where stark volcanic landscape meets the sea on the Alaskan Peninsula, to spawn. But they also inevitably encounter some of the park’s 2,200 brown bears, who, around July, enter into a state of hyperphagia — a.k.a. eating nonstop.

As Outside magazine explains, there’s a lot we don’t understand about the science of bear hibernation. But we do know that “bears are so good at packing on fat (while remaining strangely resistant to plaque buildup in the arteries) and barely moving for months (without much muscle or bone deterioration),” Outside’s Erin Berger writes. This is why “many researchers are interested in our ursine friends for applications in long-term space flight or medical issues like the atrophying effects of long hospital stays.”

And know: The bears aren’t just gorging mindlessly. There’s strategy here. They’ll often just eat the skin, eggs, and brains of the salmon — the most calorie-dense parts of the fish. “Like miners looking for high-grade ore, bears try to consume high-grade fat,” Katmai National Park explains. And though there’s only so much space in the bears’ stomachs, they can add up to four pounds of weight a day.

Each summer, we all can watch this transfer of energy along the food chain via an extremely popular Explore.org livestream. The livestream is handy since few visitors make it all the way to Katmai. In 2017, it saw 37,818 visitors; Yellowstone National Park, for comparison, saw more than 4.1 million visitors.

The livecam is even streaming right now.

The New Yorker magazine once called the video feed “a place of zen,” capturing “the serendipitous feeling of catching a glimpse of wildlife out the window.” See for yourself. At least, it’s a nice calming thing to watch while procrastinating at work.

While the world is drastically changing for the worse due to climate change, it’s nice to track wildlife that appears to be doing exactly what it’s supposed to do.

Correction: This post misstated the last day of the Fat Bear Week contest. The final day of voting will be Tuesday, October 8. Monday’s voting was a semi-final round. We regret the error, but are elated to realize there’s one more day of Fat Bear Week remaining.