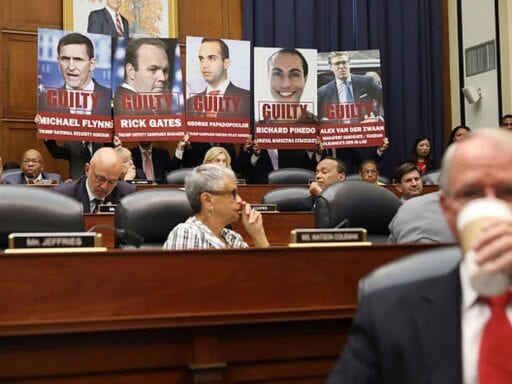 With the credibility of the Mueller probe at stake, lawmakers from both parties are turning up the heat.

FBI agent Peter Strzok’s testimony before Congress on Thursday collapsed into a full-on partisan circus, with Republican and Democratic members shouting at each other, House Judiciary Chair Bob Goodlatte threatening to hold Strzok in contempt, and Democrats staging an over-the-top political stunt.

Strzok is the career FBI counterintelligence agent whom President Donald Trump says was at the center of a secret FBI plot to thwart his presidential ambitions and elect Hillary Clinton.

Strzok oversaw the probe into Hillary Clinton’s use of a private email server in 2016 and was also involved in special counsel Robert Mueller’s Russia investigation.

During the 2016 presidential campaign, Strzok exchanged a series of text messages with Lisa Page, an FBI lawyer with whom he was having an affair, that were critical of Trump. In one particularly controversial exchange, Page texted Strzok that she was worried Trump might win. “No. No, he won’t. We’ll stop it,” Strzok reassured her.

Trump and many of his Republican allies have seized on these text messages as proof of anti-Trump bias in the FBI and to discredit the Mueller probe — the investigation Trump calls a “Rigged Witch Hunt.”

His appearance before a joint session of the House Judiciary and House Oversight Committees on Thursday was the first time he had publicly testified before Congress since the revelations about his texts.

It was bound to be a contentious hearing — and so far, it has been.

And Cummings brought along some pretty spectacular signs to make the point.

Republicans first objected to the sign-holding, but seemed to back off when Democrats asked them to cite which rules the signs violated. The signs stayed up as Cummings listed what Flynn et al had pleaded guilty to and slammed Republicans for interfering with the advancement of the Trump-Russia probe.

As the hearing continued, lawmakers fought over what kinds of questions Strzok should be obligated to answer.

Gowdy’s very first question for Strzok — about how many witnesses he had interviewed in the opening days of Russia probe — sparked a huge debate. Strzok responded that he was not permitted to answer the question based on instructions from the FBI. Then Goodlatte threatened to hold Strzok in contempt for not answering the question.

“Mr. Strzok, you are under subpoena and are required to answer the question,” Goodlatte said.

“This demand puts Mr. Strzok in an impossible position,” Jerry Nadler, the top Democrat on the House Judiciary Committee, responded. “If we have a problem with this policy we should take it up with the FBI, not badger Mr. Strzok.”

Strzok then asked to speak to the FBI general counsel before answering the question.

When Goodlatte responded that Strzok could only consult “with your own counsel,” that set off another testy exchange. Per CNN:

“Mr. Chairman, there’s no basis for that,” protested the top Judiciary Democrat, Rep. Jerry Nadler of New York. “He can consult with the FBI counsel, he’s an FBI employee.”

”The gentleman is not recognized,” Goodlatte responded.

”And the chairman is not being proper,” Nadler shot back.

At one point, Strzok suggested that his removal from the special counsel’s Russia investigation was driven by optics. “It is not my understanding that he kicked me off because of any bias … it was done based on the appearance,” Strzok said, adding that he “didn’t appreciate” the way Gowdy was framing the issue.

Gowdy replied, “I don’t give a damn what you appreciate Agent Strzok.”

“I don’t appreciate having an FBI agent with an unprecedented level of animus working on two major investigations during 2016,” Gowdy added.

The stakes are high here, which may explain the tense nature of the hearing. If Strzok’s defense of his past actions is received well by the public, he could potentially deal a serious blow to the power of right-wing narratives about FBI corruption.

But if he comes off looking bad it will do damage to the credibility of the Mueller probe — and Mueller’s ability to investigate the full extent of Trumpworld’s relationship with Russia.

Vox Sentences: Climate talks left in the cold
15 movies you can watch in “virtual theaters” this weekend
“Shelter in place” is impossible if you can’t afford a home
Harvey Weinstein convicted on rape and criminal sexual act charges
Welcome to the July issue of Vox’s The Highlight
Vox Sentences: Trump gets nothing