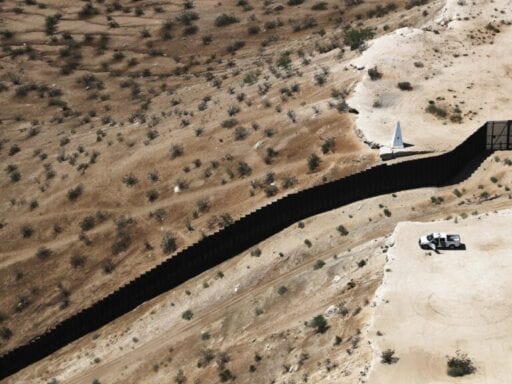 A 79 mile stretch of new wall in California and Arizona has been put indefinitely on hold.

A federal judge has ruled construction on a 79-mile stretch of the wall on the US-Mexico border cannot proceed. The decision came Friday, and permanently stops work on a section of the wall that was meant to span from El Centro, California to Tucson, Arizona.

The ACLU brought the case on behalf of the environmental group Sierra Club and the community organization the Southern Border Communities Coalition. They argued argued that building the wall in these areas would cause harm to “recreational and aesthetic interests” in the region. The desert landscape included in the court decision includes national monuments, reserves and rivers.

The groups also argued — as they did in a successful May challenge to a section of the border wall planned in Arizona and Texas — that the money the Trump administration set aside for the California to Arizona span of wall had been improperly appropriated.

US District Court Judge Haywood S. Gilliam Jr. of Oakland, oversaw both cases, and found that in this most recent case, as he did in May, that the Trump administration had illegally planned to build the wall with Congressional funds that had not been earmarked for that purpose. The Pentagon planned to finance the California-Arizona section of wall using $1.5 billion from military pay and training accounts through a Department of Defense counterdrug program.

Although the administration argued that money could be used for the border wall thanks to President Donald Trump’s national emergency declaration in February, its usage for the purposes of building the wall nevertheless needs to be approved by Congress, Gilliam wrote. Congress has not approved border wall use of the Department of Defense money.

The judge explained his reading of the Constitution’s explanation of the separations of powers with respect to the appropriation of funds in a detailed opinion following his May ruling:

“Congress’s ‘absolute’ control over federal expenditures — even when that control may frustrate the desires of the Executive Branch regarding initiatives it views as important — is not a bug in our constitutional system,” Gilliam wrote in a 56-page decision. “In short, the position that when Congress declines the Executive’s request to appropriate funds, the Executive nonetheless may simply find a way to spend those funds ‘without Congress’ does not square with fundamental separation of powers principles dating back to the earliest days of our Republic.”

As Vox’s Eric Kleefeld explained following the first ruling, the government’s case for using Department of Defense funding was weakened by its efforts to go through Congressional channels to obtain money for the wall:

As Gilliam notes, the executive branch did try to go through Congress in getting border wall funding. Vox’s Dara Lind reports that lawmakers gave the White House $341 million in 2017 and $1.375 billion in 2018 to upgrade and repair to existing wall infrastructure. A fight over wall funding that led to an extended government shutdown early in 2019 ended in an agreement for an additional $1.375 billion. This was far less than the $5.7 billion Trump hoped to receive, and after the government reopened, he declared a national emergency, announcing plans to use the powers given to him by the National Emergencies Act to use federal funds to make up the difference.

Taken together, the June and May rulings block $2.5 billion of the $6.7 billion the Trump administration hoped to use for the wall through the president’s national emergency powers.

Following the May ruling, President Trump called Gilliam an “activist judge” and asked for an expedited appeal of the decision.

The newest ruling will likely be appealed as well.

Trump continued to advocate for the wall Saturday during the G20 summit in Osaka, Japan. There, he responded to questions about Óscar Alberto Martínez Ramírez and his toddler daughter, Valeria, a father and daughter who drowned in the Rio Grande River while trying to seek asylum.

A photo of the bodies of the parent and child went viral last week, leading to widespread condemnation of the Trump administration’s hardline approach to immigration and to its policy of “metering,” or allowing in only a set number of asylum seekers per day at official border crossings.

Commenting on the tragic deaths, Trump said, “If we had walls up, and if we had it hard, the father and the beautiful daughter who drowned … if they thought it was hard to get in, they wouldn’t be coming up. So many lives would be saved.”

Critics disagree. As Vox’s Dara Lind explained, the sections of wall that currently stand were built to “funnel” immigrants into areas lacking wall that are patrolled by border agents; building more wall could funnel immigrants into more challenging and dangerous crossings, like the one the Martínez Ramírez and Valeria attempted, which would result in more deaths.

The wall remains a signature issue for Trump, and despite this setback and the concerns of his critics, he will likely continue to push for it, particularly as he embarks on his 2020 presidential campaign.

Is the customer always right if they refuse to wear a mask?
California and Florida voters could change the lives of millions of animals
The CDC has begun testing blood for immunity against coronavirus
How to help a friend through a tough time, according to a clinical psychologist
Trump to campaign for Kevin Cramer in North Dakota on June 27
5 top 2020 Democrats vow to reverse Trump’s new landmine policy