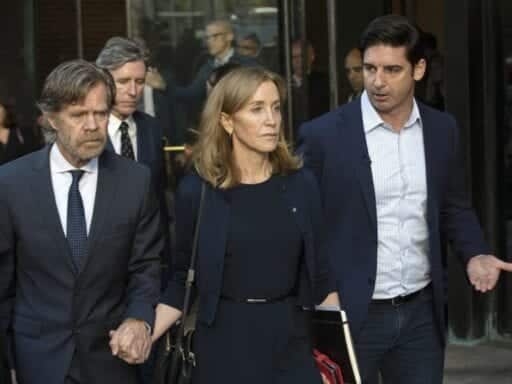 Huffman is the first of a group of accused parents to face consequences in the college admissions case.

Actress Felicity Huffman was sentenced on Friday to 14 days in federal prison for her role in a college admissions conspiracy. In that conspiracy, 34 wealthy and mostly white parents of college-age children are alleged to have paid thousands, and in some cases hundreds of thousands of dollars, to inflate their children’s credentials during the college application season.

Huffman was the first parent to receive a judgment.

Judge Indira Talwani oversaw the sentencing in Boston, where an investigation by the US attorney for the District of Massachusetts accused some 50 people, including coaches, test administrators, and others, of falsifying college admissions credentials. Investigators said some of the accused changed answers on tests; others bribed athletic coaches to claim they had recruited students for sports they did not play.

The case shed light on the advantages that those with great financial resources have during the college admissions process, and on the fine line between acceptable upper-hands available to some — such as the ability to hire private tutors, access to internships, and legacy admissions — and outright fraud. It has also brought renewed attention to cases in which disadvantaged people, primarily poor parents of color, have faced strong punishment for educational fraud, placing a harsh spotlight on racial and economic discrepancies within American education.

Huffman was arrested in March of this year as part of the federal investigation into cheating during the college admissions process. She was charged with conspiracy to commit mail fraud and honest services fraud, and pleaded guilty on May 13 to paying $15,000 for a test proctor to correct her daughter’s incorrect answers on the SAT, thus greatly inflating her daughter’s scores.

Beyond having to serve a fortnight in prison, Huffman must also pay a $30,000 fine and serve 250 hours of community service. She will commence her two-week prison sentence on October 25.

At the sentencing, Judge Talwani rebuked those involved in the scandal, including Huffman, for being unsatisfied with the opportunities afforded by their wealth, and for using that money and influence to take “the step of obtaining one more advantage to put your child ahead of” everyone else.

After the sentencing, Huffman released a statement that read, in part, “I accept the court’s decision today without reservation. I have always been prepared to accept whatever punishment Judge Talwani imposed. I broke the law. I have admitted that and I pleaded guilty to this crime. There are no excuses or justifications for my actions. Period.”

Actress Lori Loughlin, of Full House fame, casino executive Gamal Abdelaziz, and vineyard owner and Democratic donor Agustin Huneeus are also among the accused. Loughlin and her husband, fashion designer Mossimo Giannulli, who stand accused of spending nearly $500,000 to get their daughters improperly recruited to the University of Southern California as rowers, will take their case to trial; the date has not yet been set.

The story has brought to the fore questions of how race and class factor into college admissions. As Vox’s Libby Nelson has written, plenty of college application padding is completely legal, if you can afford to do it. Wealthy people hire private tutors, essay coaches, and test prep services, for example. Others make large donations to schools ahead of their children applying.

But while few bat an eye at giving those capable of making such donations, or even legacy applicants, a leg up, similar advantages offered on the basis of race, through affirmative action policies, are consistently critiqued:

The children of alumni get a leg up. So do the children of major donors; a recent lawsuit over Harvard’s admissions policies revealed the details of how they are treated as much as revenue generators as they are for their potential as students. And athletes are routinely admitted with lower grades and test scores than other students.

None of these advantages in the admissions process typically attract as much attention and outrage as the most notorious admissions preference: race-based affirmative action. That outrage rarely considers that, legally, affirmative action cannot exist merely to help individual students overcome discrimination. Colleges, according to the Supreme Court, can consider race in admissions only to educationally benefit all students on campus by creating a racially diverse environment, and only if considering race is the only way to create that environment.

As P.R. Lockhart has also written for Vox, the whole college admissions scandal demonstrates how racial and educational inequality intersect. While the conversation in this case has centered around advantages available to some when they apply to college, differential access to education and opportunity begins much earlier than that:

But in many ways, the disparities highlighted by the scandal fit into an even larger set of gaps that don’t always draw the same attention. A recent report from a nonprofit called EdBuild found that on average, predominantly white school districts receive $23 billion more in funding than school districts that primarily serve students of color and those from low-income families (the difference is largely due to local wealth and taxes, according to the EdBuild report).

By the time a student reaches high school, that gap has influenced not only what the student has already learned but what they’ll learn in the future. Research has shown that students attending financially stable high schools are more likely to have access to Advanced Placement and college preparation courses, but more importantly than that, they are more likely to have acquired the skills to succeed in those courses.

Friday’s sentencing hearing — and the ongoing legal action against the remaining alleged conspirators — raised questions of how wealthy and white defendants will fare when facing charges of educational fraud, compared to similar cases involving poor parents and students of color who are most affected by educational disparities.

At Huffman’s sentencing, for example, the case of Kelley Williams-Bolar was brought up: Williams-Bolar, a single mother who is black, was sentenced to five years in prison in 2011 for using her father’s suburban address to get her children into a different, well-regarded public school district. Her sentence was later reduced to 10 days in jail and three years of probation.

“If a poor single mom from Akron who is actually trying to provide a better education for her kids goes to jail, there is no reason that a wealthy, privileged mother with all the legal means available to her should avoid that same fate,” said Eric S. Rosen, the lead prosecutor in Huffman’s case.

Prosecutors in the Huffman case also referred to teachers in a mostly-black school district in Atlanta who received prison time — in some cases, up to three years — for helping students cheat on state tests. And the scandal has brought new attention to the case of Tonya McDowell, who was homeless in Bridgeport, Connecticut, when she enrolled her 5-year-old son in a suburban school district. She was charged with grand larceny and sentenced to five years in prison.

Some legal experts like David Singleton, who helped win clemency in the Williams-Bolar case, said the case provides a trenchant opportunity to examine the criminal justice system as a whole.

“When you are rich — and particularly if you’re rich and white in this country — there’s a different justice system,” Singleton told the New York Times. “Sending Felicity Huffman to jail is not going to solve that problem.”

Other observers, as Vox’s Anna North has written, argue the scandal is an encapsulation not just of inequity in the courts, but could “prompt a reexamination of society’s misconceptions around wealth and merit:”

The idea that wealthy people have all worked for and deserve their wealth is “a sacred value in this country,” [University of California Irvine psychology professor Paul Piff] said.

“That’s kind of baked into the American dream,” he explained — and if we believe that rich people earned all their money, we’re more likely to put up with a big gap between rich and poor.

By allegedly paying to get their kids into schools they wouldn’t have been admitted to on their own, parents accused in this scandal may have been perpetuating this myth of meritocracy.

Martin Murphy, lawyer for the defense, argued that Huffman had already been tried and found guilty in the court of meritocracy, and that she faced significant consequences because of her role in the scandal, including losing career opportunities. Huffman is best known for her work on the TV show Desperate Housewives, and her defense team said acting her acting opportunities have become increasingly limited.

Addressing the judge, Huffman expressed remorse, and said she had learned a valuable lesson.

“I realize now with my mothering that love and truth must go hand in hand, and that my love coming at the expense of truth is not real love,” she said.