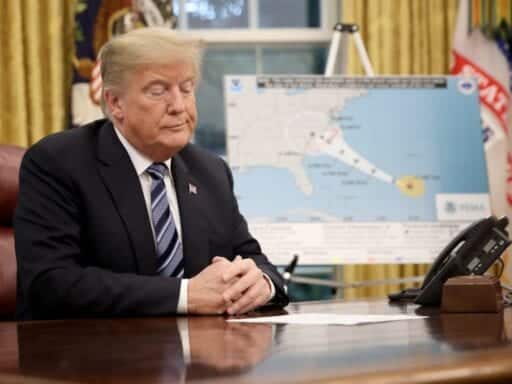 Under a normal president, this wouldn’t be a big deal. Under Trump, not so much.

You’ll probably be getting an emergency alert text message from President Donald Trump next week — but not to worry, it’s just a test.

FEMA and the Federal Communications Commission (FCC) on Thursday will do their first test of an alert system that lets the president communicate with the public in the event of a national emergency via their cell phones. More than 100 mobile carriers, including all major wireless companies, are participating in the Wireless Emergency Alerts (WEA) test, which will take place on September 20 at 2:18 pm Eastern Time.

The idea of Trump having control over a nationwide wireless alert system may seem unsettling to some, or an annoyance for those who want to hear less from the president, not more. But this is part of the regular development of a national warning system, called the Emergency Alert System (EAS), that pre-dates Trump and has been under development for years.

It’s the same one that’s used to warn the public about dangerous weather or missing children — think tornado warnings and AMBER Alerts. FEMA has already conducted three nationwide tests of the EAS, and will conduct another on Thursday, just two minutes after the first nationwide WEA test. The wireless test message will read “Presidential Alert,” and include a clear warning that it’s just a test, per FEMA:

“THIS IS A TEST of the National Wireless Emergency Alert System. No action is needed.”

Cell towers will broadcast the test for about a half an hour, during which most cell phone that are switched on and within range of an active cell tower will get the test message.

Users can’t opt out, in accordance with the 2006 law passed by Congress, the Warning, Alert, and Responsiveness Act, under President George W. Bush.

Beyond the wireless alerts, a test alert will also go out via radio and television broadcast, cable systems, satellite radio, television providers, and wireline video.

This is (hopefully) fine

Given the president’s erratic tweeting habits and penchant for reacting to emergency situations without having all the facts, the idea of Trump having the ability to send alerts to the entire country could be, for some, a bit disconcerting. But there are guardrails in place so that that the system is used for actual emergencies only — not a reaction to a Fox News segment, or a declaration that the Russia investigation is a witch hunt.

According to the Integrated Public Alert and Warning System Modernization Act of 2015, the system “shall not be used to transmit a message that does not relate to a natural disaster, act of terrorism, or other man-made disaster or threat to public safety.”

Irwin Redlener, director of the National Center for Disaster Preparedness at Columbia University, told me that the wireless alert system is a good idea, as is testing it — but having someone as volatile as Trump with control over it is concerning.

“I’m not sure that the system would protect us from rogue announcements by a president who has exhibited the kind of behavior President Trump has over the last two years,” Redlener said. “I personally would not give this microphone to Donald Trump.”

UCLA communications professor Tim Groeling told NBC News that broadcast-based emergency alert systems “have remained professional and impartial over decades,” and wireless systems are “necessary” in an era when people are more disconnected from television and the radio.

Of course, in previous decades, Trump wasn’t in the White House. “If it wasn’t for the style, personality, and behavior of Donald Trump, I don’t think this question would have ever come up,” Redlener said. “Of course the president would have access [to the emergency alert system] in the situation of a national emergency.”

Emergency alert systems aren’t infallible — a false alert about an impending missile threat to Hawaii caused widespread panic in January. But the concern is more Trump’s personality than it is the accidental push of a button.

“We need to accept the fact that any of these systems can fail, miscommunications can go out when the wrong button’s being pushed. That’s a given for any system of this type,” Redlener said. “What I’m more concerned about is the president of the United States taking control over such a system intentionally to create havoc, to make some sort of highly disruptive, highly political announcement.”

How “forever chemicals” polluted America’s water
The past 48 hours of Justice Department political shenanigans, explained
How digital technology is destroying our freedom
John Kasich makes the Republican’s case for Joe Biden
The week in US-Saudi Arabia-Iran tensions, explained
5 polluting industries that won big from Scott Pruitt’s tenure at the EPA