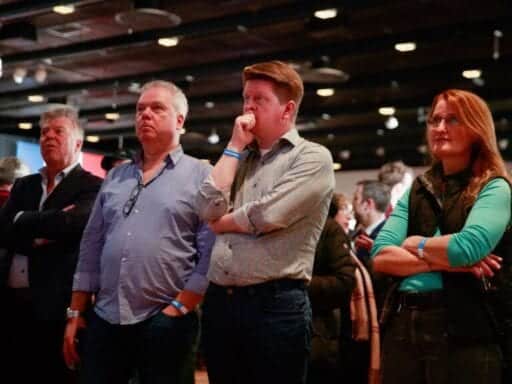 Share
Loading...
Caucus goers wait for the results of the 2020 Iowa Caucuses on caucus night at Drake University. The results weren’t made available until later in the week due to reporting complications. | Jeremy Hogan / Echoes Wire/Barcroft Media via Getty Images

The results of 95 precincts are under review by the requests of three campaigns.

The Iowa Democratic Party is currently reviewing caucuses results from 95 precincts called into question by Democratic presidential candidates and will announce any corrections on Monday, the party said in a statement on Saturday.

These final results are expected to come in before before 1 pm ET Monday, less than 24 hours before polls open in the New Hampshire primary, and will close the books on caucuses marred by a chaotic election night and lengthy results delays.

After all of the precincts finally reported their results Thursday, presidential campaigns were allowed to contest those tallies by submitting evidence of inconsistencies between the reported results and official records. The state party reportedly received challenges from the campaigns of Sens. Elizabeth Warren and Bernie Sanders, as well as former South Bend Mayor Pete Buttigieg. The 95 precincts the campaigns challenged make up 5 percent of the state’s precincts.

While 5 percent may not seem like a lot, any changes made due to the review could radically reshape the results. At the moment, preliminary results show Buttigieg in first place in the state delegate equivalent count, with Sanders of Vermont close behind in second place — in fact, they are separated by just 0.09 percentage points. Popular vote totals, reported this year for the first time, show Sanders in first place by a larger margin — around 6,000 votes — and Buttigieg in second. Warren is in third by both counts.

“They screwed it up badly is what the Iowa Democratic Party did,” Sanders said on CNN’s State of the Union Sunday morning, adding later, “The incompetence there in Iowa was just extraordinary.”

“The incompetence there in Iowa was just extraordinary,” Sen. Bernie Sanders says about the delay in results from the Iowa caucuses. https://t.co/HmJeBCBgzD #CNNSOTU pic.twitter.com/57xfPWehTi

Buttigieg’s campaign has said the Iowa Democratic Party “did the right thing” in delaying results to ensure they’re accurate, but was quick to claim victory heading into the New Hampshire primary. The Iowa caucuses “represent an astonishing victory for our movement,” he said on Tuesday.

“I’m frustrated, I’m mad as hell, everybody is,” Perez said told CNN Sunday. “I think what we’re going to do at the end of this cycle is have a further conversation about whether or not state parties should be running elections.”

State party chair Troy Price has agreed “an independent investigation of what happened is necessary” — but first, the review of the results needs to be completed and a winner formally declared.

The Iowa caucuses are usually massively important to presidential primaries, whether you like it or not. Nearly every major party presidential nominee of the last 40 years began their rise by winning the Iowa caucuses. The contest has a huge effect on a candidate’s chances going into all of the primaries that follow, increasing media coverage and oftentimes fueling donor support, which can snowball into further popularity.

That’s one reason why the unusual delay in Iowa results are a major kick in the gut for Democrats seeking to fire up voters.

So why did this happen? It comes down to a potent mix of technical problems and human error.

For the first time, precincts were tasked with reporting multiple results: the actual number of votes each candidate received in both the first and second rounds of caucusing and the amount of state delegates each candidate was to receive based on those second-round vote totals. Those results were be reported through a new smartphone app — also a first. People had trouble using the app, and phone lines used to call in results as a backup option were jammed for hours — in part thanks to trolls.

The party also instituted some rules changes around how caucus-goers were allowed to switch their support in an attempt to streamline the process and to make it less confusing.

However, all of these changes introduced more opportunity for human error.

The Iowa Democratic Party said when results started coming in, “it became clear that there were inconsistencies with the reports.” Iowa Democratic Party Communications Director Mandy McClure said afterward that the party could resolve these inconsistencies, but needed time to review photos of the results and “a paper trail” to do so, noting that there was no malicious intent that affected totals: “This is not a hack or an intrusion.”

That review took time, and led to results being released in batches over much of last week.

And that led to Perez called upon the state party to immediately begin “recanvassing” — or auditing the results for accuracy days after they were first expected to be released in full. “Enough is enough,” he wrote Thursday on Twitter.

The chaos has put some extra oomph behind calls to strip Iowa of its first in the nation status; before the snafu, those in favor of changing state voting order argued Iowa doesn’t represent the diversity of the US and uses an inaccessible voting system.

Perez said Sunday those calls for change will be taken seriously — just not yet: “That’s a conversation that will absolutely happen after the election cycle,” he said on State of the Union.

In the meantime, if the results change after this latest review, it’s not clear how much of a difference it will make for any one individual candidate. Buttigieg and Sanders, the men fighting for first place, have each already declared victory. And most contenders — including those presidential candidates still grumbling over the opaque results — have already turned their attention to New Hampshire, whose citizens have their primary on February 11.

Journalism has a trust problem. The podcast In the Dark proposes a compelling solution.
The “Get Your Knee Off Our Necks” March on Washington in photos
The extraordinary danger of being pregnant and uninsured in Texas
Joni Ernst walked back her call for Joe Biden to be impeached if elected
You can now legally buy marijuana in Illinois
Thomas Hardiman, Donald Trump's Supreme Court finalist, explained