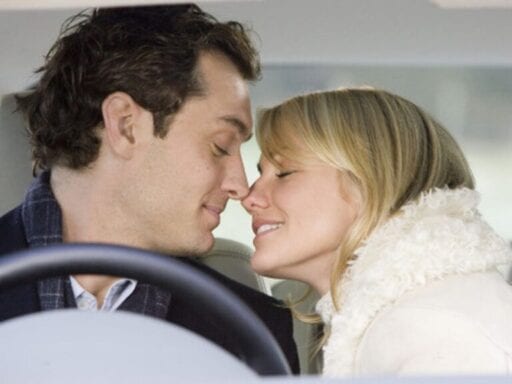 It’s Complicated, The Holiday, Parent Trap, Something’s Gotta Give — they are scientifically proven to make you feel better.

When my sister Patricia got married in 2018, she had her first bout of nerves the morning of her wedding. She and her fiancé had been planning the wedding by themselves for more than a year without any major signs of stress. But that was before my parents and their insistent, well-intentioned habit of asking the same 14 questions over and over (“What time is X? When do we have to leave? What are we doing tomorrow?”) arrived.

Amanda, Patti’s best friend since high school and maid of honor, knew exactly what to do to calm Patti down: She grabbed a laptop and began playing It’s Complicated, Nancy Meyers’s 2009 hit, starring Meryl Streep and Alec Baldwin as divorced parents who rekindle their spark by having an affair with each other.

It took maybe 10 seconds into the movie — long before Baldwin or Streep actually showed up — to calm my sister down. Mind you, those 10 seconds consist of gorgeous B-roll of the Southern California coast dotted with Tuscan-style roofs, accompanied by aggressively mild, plunky mall music scored by Hans Zimmer. But even that was enough.

It’s Complicated, and any other movie by the incomparable Nancy Meyers, would have a similar effect on me. And there’s no doubt that’s true for many other Meyers stans, too.

Meyers is an alchemist, combining low-stakes conflict (usually romantic, usually resolved) with plush aesthetics to create films that warm the soul and make you forget your nagging, ugly problems. Her movies are like cinematic Klonopin, designed to ease your mind. But their warmth and sweetness also stick with you.

From the 1998 Lindsay Lohan-led The Parent Trap to 2003’s Something’s Gotta Give to 2006’s The Holiday, and even to the slightly maligned The Intern from 2015, there’s always a moment when a bolt of sunlight splashes onto the screen that you’ll remember long after the credits roll.

And if you’re looking for a comfort watch in these harrowing times, especially some good shelter fantasies, I cannot recommend Meyers’s movies enough.

My sister’s love for It’s Complicated stems from Streep doing a drag impersonation of the one and only celebrity chef Ina Garten. Streep plays Jane Adler, who runs a gourmet bakery/prepared foods shop not unlike Garten’s Barefoot Contessa (Meyers has said her food scenes take inspiration from Garten’s Food Network shows). Jane has a beautiful post-divorce life in Southern California and an amicable relationship with her ex, Jake (Baldwin).

It’s Complicated is the rare story that dares to show the silver linings of divorce, putting forth the idea that signing the divorce papers doesn’t have to be the end of the relationship. Showing those little-seen sides of relationships is a crucial theme of Meyers’s work, and a large part of its appeal.

“I have spent the last two decades not only being single but writing a couple of movies about divorced women my age — purposely defying the clichés that being older and single meant you were destined to be undesirable, lonely and isolated,” Meyers wrote in the New York Times in February. “I wrote about women in my films who blossomed post-divorce, much as I had done in some ways.”

Though Jane is, as Meyers points out, divorced and older than Hollywood’s typical female leads, the fantasy she embodies is widely relatable. She takes control of her life, makes chocolate croissants, calls the shots on redecoration, and is a good mom. Jane’s a success story, each part of her life perfectly squared away. She’s so successful that her biggest problem is that she’s so desirable: Her affluent ex-husband wants to date her again, as does her architect, Adam Schaffer (played by Steve Martin).

Streep, Baldwin, and Martin turn in charming performances. The movie is brilliantly shot, and makes you believe that if you had the finances for a Santa Barbara weekend home, you would definitely purchase one.

But It’s Complicated is a close second in my definitive and immutable Nancy Meyers rankings. My winner is The Holiday. The Holiday is a little flimsier than It’s Complicated, but it sticks with me because of its two fantastic protagonists (played by Cameron Diaz and Kate Winslet), two great houses, two romantic leads, and one very adorable old man.

Meyers centers The Holiday on Amanda Woods (Diaz) and Iris Simpkins (Winslet), two women who find themselves in a rut. Both are pining for men who aren’t worth their time, and both have the opportunity to take a winter holiday from their work. Iris is a little more desperate than Amanda — as she briefly tries to off herself by sticking her head into a terrifyingly adorable oven, Sylvia Plath-style.

Somehow, the two find each other through a house-swap website (an interaction where each actress reads out the chats aloud, because that’s how movies portrayed the internet in 2006). They switch houses as well as countries: Amanda has a modern Southern California dream, and Iris has a cozy, rustic cottage in Surrey, England.

Amanda gets the better part of the deal, even though she owns the better house. She connects with Iris’s bronzed, endearing book editor brother Graham (played by Jude Law at the peak of his handsomeness). Iris, meanwhile, spoils herself living in Amanda’s Malibu-adjacent dream house, where she meets a composer (Jack Black) whom she falls in love with and Arthur Abbott (Eli Wallach), an older, legendary composer whom she befriends.

The story Meyers is telling here is about how these women find their own worth, their love, and their lives. But it’s also about the beauty and security of their homes. Iris’s cottage and Amanda’s mansion are reflections of who they are, and at first, it’s difficult for each one to truly feel “at home” in someone else’s. Amanda especially gets a bout of homesickness, signaling how much these homes mean to these women’s lives. But by living in each other’s houses, Iris and Amanda begin to appreciate and get a sense of each other’s lives, even if they’ve never met.

Love, career success, happy endings, beautiful homes, and a gorgeous Jude Law who cries and wear glasses — I don’t know what else one could ask for in a romantic comedy. And Meyers has no peers when it comes to showing us the kind of homes we want to live in.

Like most Meyers movies, the peaks are always high and valleys never low. I don’t know if there’s a director who captures soul-soothing warmth and tranquility better than Meyers, who wrings genuine emotion even from her more surface-level stories.

Nancy Meyers’s movies might not have all the Best Picture bona fides and technical achievements that others do. But they’re some of the movies I like the best, and the ones that never fail to make me feel better, more hopeful, and less alone. And they might be just the thing some of us need right now.