First Man stars Ryan Gosling as Neil Armstrong, a man struggling to deal with his grief 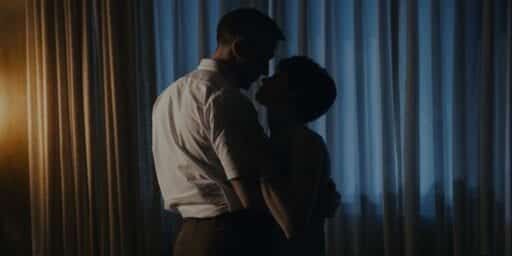 Share
Loading...
Midway through First Man, American astronaut Neil Armstrong (Ryan Gosling) is asked by a reporter at a press conference how he feels about the fact that, should the Apollo 11 mission be successful and he lands on the moon, he’ll go down in history.

Armstrong can’t answer the question. He impatiently snaps that NASA and the ship’s crew plan to be successful. Buzz Aldrin (Corey Stoll), seated by his side, eventually has to step in to talk about the crew’s great responsibility and excitement, while Armstrong stares intently into the middle distance.

The stoicism that might have prevented a man like Armstrong, who was facing either death or a kind of immortality, from being able to articulate an answer in that moment is the heart and soul of First Man. The film is less concerned with delivering a triumphalist portrayal of the 1969 moon landing — which has been done before, we’ve all seen it — and more with probing what kind of person is able to white-knuckle through the physical, emotional, and psychological toll of this sort of mission and successfully pull it off.

The answer is gratifyingly, understatedly intricate. Like last year’s Dunkirk, First Man funnels a historical moment through an intimate experience, reminding us that events that appear triumphant in history’s rearview mirror often come at the expense of pain and great personal sacrifice shouldered by real people. But the movie, first and foremost, tells Neil Armstrong’s story. We’re allowed to see it through his eyes, but in return, it asks us to respect what he went through — and that is not always easy.

At the distance of a half-century, the facts of the moon landing are well-known to most Americans: Neil Armstrong and Buzz Aldrin became the first humans to set foot on the moon on July 20, 1969, the culmination of a “space race” between the US and the USSR. They collected samples to bring back to Earth for scientific research. They left behind their footprints and an American flag.

All these elements are present in First Man, but the challenge with any movie based on epochal historical events is to find a fresh story in familiar facts. In this case, screenwriter Josh Singer (The Post, Spotlight) adapted James R. Hansen’s authorized biography of Armstrong. (Armstrong was famously private, but he granted more than 50 hours of interviews to Hansen and gave him access to private documents and family sources.)

The resulting film, directed by Damien Chazelle (who won the Best Director Oscar for La La Land in 2017) is laser-focused on Armstrong’s life, beginning with the tragic cancer-related death of his 2-year-old daughter Karen in 1962, prior to him being chosen for Project Gemini. Like the book on which it’s based, First Man paints a portrait of Armstrong as someone for whom heroism was never a motivator, and who viewed notoriety with deep reluctance.

Armstrong — whom Gosling plays with constraint — moves with his wife Janet (Claire Foy) and young son Mark to Houston, where he begins training alongside the other astronauts selected for the mission. The Armstrongs soon add another son, Eric, to their family, as they find themselves welcomed into the community of astronaut families.

First Man moves methodically but swiftly through each stage over the next six years, with the astronauts training, testing, running simulations, and making progress toward actually putting men on the moon. The film can flag a bit in these sequences (which is probably not wholly unlike the experience of living through them), but the shadow of danger is always present, even the mundane scratchings of diagrams and equations on a notepad. The men — and their families — are well aware of the risks they’re taking. And that realization only heightens over time, as a handful of their colleagues, their friends, are killed in the process.

What First Man makes clear is just how easy it is for something to go wrong. Janet remains thoroughly supportive of her husband’s work even as she ruefully confides in a friend that she married him because she wanted a stable life. Later, in one tension-fraught moment, she explodes at flight crew operations director Deke Slayton (Kyle Chandler), angrily calling the project “a bunch of boys making models out of balsa wood.” Any small error or unavoidable mistake could result in death, and the astronauts and their families live with that knowledge for years in a way that politicians at briefings or civilians watching the evening news will never understand.

We’re seeing all of this through Armstrong’s eyes — there are dozens of close-ups of Gosling’s eyes throughout the film — so even though we know what happens, there’s a feeling of considerable relief when the Apollo 11 crew manages to successfully launch out of Earth’s atmosphere and then, in a beautiful wide-shot sequence, actually land on the moon. (First Man’s score is pensive even when it’s majestic, as written by Justin Hurwitz, the Oscar-winning composer with whom Chazelle has collaborated on all of his films.)

That the movie never really reaches a state of full-blown exhilaration is likely to frustrate viewers who are looking to have their sense of ownership in its historical events reinforced. But rather than focus on American achievement, First Man pays its deepest respects to Armstrong and to the men and women who risked and sacrificed their lives to get to the moon. The movie sees Armstrong’s reserve as both a blessing and a curse, a gift and a problem, but it’s unequivocal in its admiration of his humility. And in this way, it feels less like it’s forcing a myth onto the man who made it clear to his biographer that he wasn’t seeking renown — and more like a statement of gratitude.

Why go to the moon at all?

One question that First Man poses frequently, in the midst of Armstrong’s story, is unavoidable: Why bother? Is the risk of trying to land on the moon really worth the reward? Wouldn’t the money being funneled into space be better spent fixing problems on Earth?

To its credit, First Man doesn’t try to answer that question, opting instead to simply remind us of how others have answered it in the past. The clip of John F. Kennedy’s 1962 “we choose to go to the moon” speech plays late in the film, giving one answer: that it’s a challenge America can rise to and overcome, so it is worth doing — and, implicitly, it means victory over the Soviets too.

Another answer it offers is the more pragmatic one that NASA researchers and some politicians seemed to prefer: Going to the moon facilitates scientific discovery and research, so it is worth doing.

But Armstrong gives a third, deeply personal answer early in the film, explaining that leaving the planet, and seeing how thin the atmosphere is that keeps us alive — seeing, with one’s own eyes, just how fragile human life is — gives a different perspective.

Gosling’s portrayal of the stoic Armstrong is so understated that it’s hard to tell how much Armstrong realizes the weight of what he’s saying. But it seems that, having encountered his child’s death, he needs to keep skirting and seeing the curtain that flutters between death and life, in order to make some sense of his own deeply buried grief.

The moon landing, for him, is a kind of culmination. Chazelle treats the sequence with a light hand, as a series of vignettes seen mostly in silence through Armstrong’s eyes. Armstrong watches as Aldrin bounds across the lunar landscape. He looks back at the lunar landing module and the American flag planted in the dust next to it, down at the vast crater near his feet, and back at the module. He thinks, in glimpses, of his family, and of Karen. He sees the blue marble of Earth off in the distance.

And by the end of First Man, as the film shows crowds around the world cheering the Apollo 11’s accomplishments and waving flags, the spectacle and success are less significant than the shifts that take place inside of Armstrong himself. Yes, he’s taken one giant leap for mankind. But in First Man, it’s the one man’s small step that’s most significant in the end.

First Man premiered at the Venice Film Festival and screened at the Toronto International Film Festival, and will open in theaters on October 12.