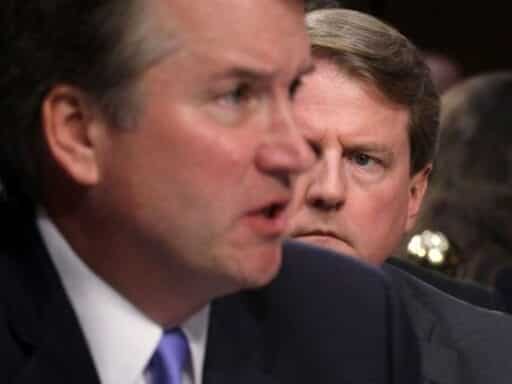 He said he hadn’t committed harassment or assault.

Supreme Court nominee Brett Kavanaugh — who now faces allegations of attempted sexual assault when he was a teenager — was asked directly about the issue of personal sexual misconduct during his confirmation hearing last week.

When pressed on the matter, Kavanaugh said he had not sexually harassed anyone and had not dealt with any settlements related to such allegations. The way it was framed, however, the question at the September 5 hearing — by Sen. Mazie Hirono (D-HI) — only asked Kavanaugh to detail any incidents that had taken place after he had become a legal adult.

As the New Yorker reported on Friday, Kavanaugh has been accused of an incident that purportedly occurred when he and the woman involved were both 17. In a letter that’s been shared with Sen. Dianne Feinstein (D-CA), and now the FBI, the woman says that Kavanaugh tried to force himself on her while they were at a party and covered her mouth to muffle any protest. The woman says she was able to free herself. According to statements the woman has made to friends, news of Kavanaugh’s nomination had spurred recollections of that incident.

In statements to the New Yorker, Kavanaugh has denied that the incident ever took place, and another male classmate who is mentioned in the allegation has also said he has no recollection of it.

Hirono raised questions of personal sexual misconduct during Kavanaugh’s confirmation hearing, something she’s been asking of all judicial nominees in hearings since January.

“Since you became a legal adult, have you ever made unwanted requests for sexual favors or committed any verbal or physical harassment or assault of a sexual nature?” the senator asked.

Hirono also probed whether he had ever faced disciplinary action or entered into a settlement related to this kind of conduct, something he also replied to in the negative.

“I started to ask these questions about sexual harassment because it’s so hard to hold lifetime appointees to the federal bench accountable and because I did not want the #MeToo movement to be swept under the rug,” Hirono said.

You can watch the full exchange below.

Kavanaugh also faced numerous questions about his relationship with retired federal judge Alex Kozinski, who retired from his post in December 2017 following allegations of sexual misconduct from at least 15 women.

Kavanaugh had clerked under Kozinski and appeared to consider him an important professional influence. During Kavanaugh’s 2006 confirmation hearing for DC Circuit, for example, Kozinski was the one who introduced him to the panel.

At last week’s hearing, Kavanaugh roundly condemned sexual harassment and said he had no reason not to believe the women who have come forward about Kozinski. He also said he had no firsthand knowledge of the type of harassment that Kozinski has been accused of — allegations that include inappropriate touching and sexual comments and that span three decades.

“Over the course of my relationship with Judge Kozinski, I never saw him sexually harass a law clerk or law clerk candidate,” Kavanaugh said in written responses he sent to the Judiciary Committee. He’s said that learning of the Kozinski allegations was a “gut punch.”

Demonizing Somalis is at the heart of Trump’s Minnesota strategy. His Duluth rally showed it.
Why the ending of Game of Thrones elevated the worst of fan culture
Supertrees: Meet Congo’s caretaker of the forest
Trump’s argument that impeachment “should not even be allowed to proceed,” explained
I’m an international student 7,000 miles away from family. Loneliness is my new reality.
The stark loneliness of digital togetherness