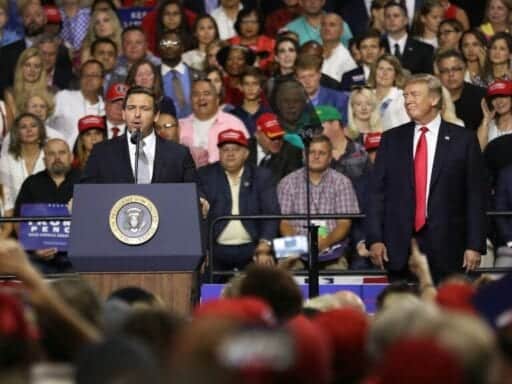 Ron DeSantis “doesn’t believe any loss of life has been inflated.”

Ron DeSantis, the Republican nominee for governor in Florida, has embraced Donald Trump as forcefully as he can during the campaign. But there is one road down which DeSantis won’t follow the president: questioning the death count in Puerto Rico after Hurricane Maria.

The president cast doubt on the official death count from last year’s hurricane in a series of tweets on Thursday morning. Though the estimate of 3,000 deaths comes from official government sources, Trump suggested that Democrats had manufactured the numbers to make him look bad because the initial death toll from the hurricane was much lower. But experts and independent analysis had long said the death toll was much higher than the original official estimate of 16.

DeSantis, who is running to be governor of a state where many Puerto Ricans have relocated after Maria, said in a statement Thursday that he “doesn’t believe any loss of life has been inflated.”

.@RonDeSantisFL camp responds to @realDonaldTrump claim this morning that the 3,000 deaths in Puerto Rico after Hurricane Maria is an inflated number pic.twitter.com/iU1sj6W5cm

It was a remarkable rebuke, as it goes, from one of the most pro-Trump candidates in the country. In the Republican primary, DeSantis aired ads that showed him building Trump’s wall with his daughter and his son wearing a Make America Great Again onesie. DeSantis even called Trump to ask for his endorsement.

Trump’s decision to politicize and duck any responsibility the deaths of 3,000 Americans was apparently a bridge too far for DeSantis. Florida’s current governor, and the Republican nominee for US Senate, Rick Scott felt the same way.

I disagree with @POTUS– an independent study said thousands were lost and Gov. Rosselló agreed. I’ve been to Puerto Rico 7 times & saw devastation firsthand. The loss of any life is tragic; the extent of lives lost as a result of Maria is heart wrenching. I’ll continue to help PR

The Hispanic vote will be crucial in Florida’s November elections, including DeSantis’s contest against Democrat Andrew Gillum. And Puerto Rican voters in Florida in particular have been the focus of a lot of interest and speculation: Will the estimated 135,000 Puerto Ricans who relocated to Florida register and vote for Democrats? Would those votes be enough to put Democratic candidates over the top in a swing state that otherwise leans toward Trump?

DeSantis’s decision to speak out against the president suggests he’s not willing to take any chances.

As the coronavirus pandemic deepens, Idaho’s governor signs 2 anti-trans bills into law
To All the Boys: Always and Forever suffers from a case of diminishing returns
Democrats’ bid to get Trump’s tax returns before the 2020 election isn’t looking good
The “pleasant ambiguity” of Medicare-for-all in 2018, explained
“Erase all doubt”: Democrats explain why John Bolton’s testimony is so necessary
The ethics of deliberately infecting volunteers with Covid-19 to test vaccines