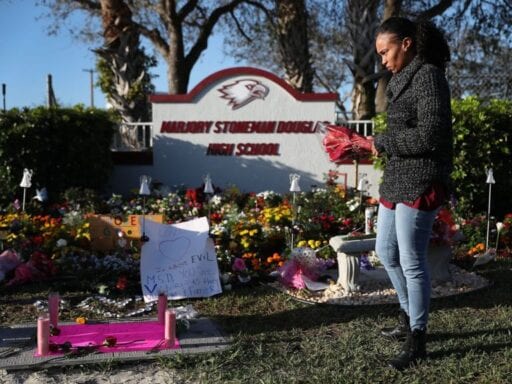 Critics say efforts to increase the number of armed school personnel ignore the concerns of students of color.

In the year since the February 2018 shooting at Marjory Stoneman Douglas High School in Parkland, Florida, several states have moved to pass laws to arm teachers as a way to protect students.

But students and parents of color worry that allowing guns into classrooms will put black, Latino, and Native American students, who are already subject to harsher discipline than their white classmates, in harm’s way.

On Wednesday evening, Florida Gov. Ron DeSantis signed a bill allowing teachers to carry guns in classrooms after receiving training. The new law — which is part of a larger set of school safety reforms — lifts an earlier ban on armed teachers in the state. The measure also extends the scope of Florida’s year-old “guardian” program, which allows some trained school officials and staffers to carry concealed firearms on campus.

The measure will go into effect on October 1. Several school districts, including Florida’s Broward County, where Marjory Stoneman Douglas is located, have declined to participate in the program, and teachers have also criticized the measure.

Meanwhile, lawmakers in the Texas Senate recently approved a bill that would expand the state’s school marshal program, which allows some school staffers to act as unofficial security and bring guns into schools after receiving training.

That program was introduced after the 2012 shooting at Sandy Hook Elementary School in Newtown, Connecticut, and the Texas Tribune notes that there are currently 170 active school marshals. The new legislation would allow their firearms, which were initially required to be kept in lockboxes on campus, to be carried by marshals at all times.

Supporters of the Texas and Florida measures argue that these proposals will make students safer by allowing school officials to respond to on-campus shootings. But these measures have been sharply criticized by students, legislators, and policy experts who note that there’s no evidence backing up the benefits of more guns in schools.

Instead, these critics point to significant racial disparities in school discipline to make the case that these measures will create additional anxiety — and risk — for students of color. For many black, Latino, and Native American students, having more people in positions of authority with guns means a lot of things, but safety isn’t necessarily one of them.

The measures in Texas and Florida both expand existing programs by allowing school staff to carry firearms in schools. But there’s little research into whether guns on campus actually prevent school shootings, and the research that does exist is hardly conclusive.

Some of this is simply due to the fact that school shootings, while high-profile, are still very rare when compared to other forms of gun violence. According to one analysis cited by the Washington Post last year, the chance of a student being fatally shot while attending school was “roughly 1 in 614,000,000.” And while 2018 was a particularly bad year for gun violence in schools, it is unclear if increasing the number of armed staffers would help.

But for students of color, who account for a disproportionately large share of students disciplined in schools, the concern isn’t that armed teachers wouldn’t make a difference — it’s that armed school officials could be more likely to respond to students of color with unnecessary force or threats.

One month after the shooting, black students from Marjory Stoneman Douglas held a press conference, arguing that calls for more police on school grounds would put them at risk.

“We want officers that will protect us, not racially profile us,” student Tyah-Amoy Roberts later told the Daily Beast. Similar concerns were raised during the March 2018 National School Walkout, as students of color told reporters that they were marching to protest not only school shootings but also police violence, some of which had happened in their school hallways.

To be fair, school discipline and violence against students are very different things. But even when looking at the latter, there are enough examples to suggest that arming teachers could lead to disastrous results.

School resource officers, for example, were placed in schools to improve safety, but there have been several high-profile incidents of officers responding to black students with violence — like when a 16-year-old girl was violently thrown in her classroom by a police officer at Spring Valley High in Columbia, South Carolina, in 2015, or earlier this year when a girl was punched, tased, and pushed down school steps by police in Chicago.

In Florida, this led to passionate debate from legislators worried about what could happen to students of color in schools, when staffers with less training get involved. “We are talking about black boys and girls who are getting murdered by police officers!” Florida state Sen. Shevrin Jones, a Democrat, argued last week as the measure was being discussed in the state legislature, the New York Times reports. “There are bad police officers and there are bad teachers.”

Still, that argument wasn’t enough to sway Florida legislators, who not only passed the measure arming teachers but also voted down an amendment that would have required school staffers in the guardian program to receive implicit bias training, which focuses on the way stereotypes about different groups can affect split-second decisions.

The Texas and Florida programs don’t mandate that school officials be armed; instead, both require school districts to opt in and have teachers and staff volunteer to participate, and require certain evaluations and training before a person is allowed to have a firearm on school property. Even so, the concerns raised by these measures fit into a larger discussion of what “school safety” actually means — and how that definition differs when the experiences of students of color are taken into account.

Recent efforts to address school safety have often failed to acknowledge these concerns. Last December, a federal school safety commission created after the Parkland shooting recommended reversing an Obama-era guidance intended to reduce racial disparities in school discipline, arguing that the guidance was an example of federal overreach and had made school officials reluctant to involve law enforcement with problem students and criminal behavior. The Trump administration officially revoked the guidance days later.

Civil rights groups countered that rescinding the guidance would do little to prevent school shootings, and would instead leave students of color vulnerable.

It highlights the problem with thinking of school safety solely as stopping school shootings, which are especially rare in communities of color. Instead, school safety must be thought of in a broader way that considers how black and brown students are forced to navigate schools.

As Jonathan Stith, the national director for the Alliance for Educational Justice, told Vox in 2018, “when we respond [to tragedy] with overpolicing and a hardening of schools, it does not create safety for black and brown students.”

Will coronavirus cause a global recession? We still don’t know.
Tropical Storm Barry: What we know
9 essential lessons from psychology to understand the Trump era
Trump casts criticism of his coronavirus strategy as a Democratic Party “hoax”
US and China reach a “phase one” trade deal
Tiger King, now on Netflix, is 7 scattered but engrossing episodes of WTF