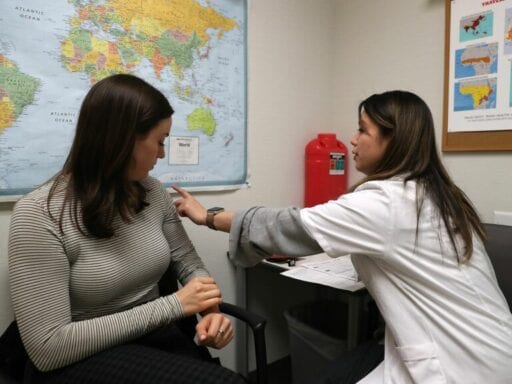 Following the deadliest flu season in decades last year, doctors have begun urging Americans to get vaccinated. But there’s a largely unreached population that many experts, including those at the World Health Organization (WHO), are thinking about: expectant mothers in the developing world.

The rate of flu-related hospitalizations is more than three times higher in lower- and middle-income countries than high-income countries, and both infants and pregnant women are at a higher risk for developing life-threatening flu.

Unfortunately, while there’s an effective flu vaccine, it doesn’t work for infants less than 6 months old. But there’s a way to vaccinate infants that can also protect pregnant women: in utero.

If an expectant mother is vaccinated, not only will she be protected against the flu — she will also pass those antibodies on to the fetus. That protection extends into the first, most vulnerable, months of an infant’s life, multiplying the effects of the intervention.

There’s still a lot we don’t know about flu epidemics in developing countries, as most research has focused on Europe and the US. A 2011 analysis estimates that there are between 28,000 and 111,500 annual deaths of children under age 5 from influenza and that 99 percent of those deaths were in developing countries. Some experts believe maternal vaccinations could be a powerful and low-cost strategy to save the lives of tens of thousands of children.

While flu vaccinations are fairly cheap (in the US they’re less than $20; in South Africa they’re less than $5), they’re extremely limited in the developing world — which makes targeting a high-risk group with a double return even more important.

Pregnant women are more likely to already be plugged into the health care system, making it easier to target them for a vaccine. Moreover, a push to expand maternal flu vaccines could be a building block for improving developing countries’ currently limited infrastructure to protect themselves against a global flu pandemic.

Flu is universal, but the risk of dying from it isn’t

The flu is a contagious respiratory infection that, according to WHO, typically infects an estimated 5-10 percent of adults and 20-30 percent of children each year. It typically causes fever, sore throat, headaches, and a cough, and while it’s not fun, it’s usually not deadly. However, there are an estimated 3-5 million cases of severe illness and 290,000-650,000 deaths from the flu each year. Last year, the United States had its deadliest flu season in decades, with 80,000 deaths.

As global research on flu slowly increases, studies are beginning to show that the burden of life-threatening flu is more concentrated in developing countries than was originally thought. Young children and pregnant women in the developing world are believed to be at very high risk, making them an important target for vaccination.

Getting a seasonal flu vaccine is the most effective way to prevent the flu. While effectiveness varies from season to season, the vaccine in the US can reduce the risk of getting the flu by 40-60 percent. Vaccination rates in the United States and Europe are relatively high, 38 percent in the US last year.

Although doctors wish those rates were a lot higher, they look good compared to the rest of the world. Some 95 percent of influenza vaccine doses were used in the Americas, Europe, and the West Pacific last year. The scant remaining 5 percent of doses are split between Southeast Asia, the East Mediterranean, and Africa.

There are a few reasons vaccination rates are so much lower in the developing world. For one, while flu outbreaks tend to happen seasonally in temperate climates, they happen more randomly in tropical climates, making them harder to predict and making targeted campaigns harder to plan.

There’s also a correlation between education and vaccination rates; the less educated a population, the lower the rates of flu vaccination. And vaccine campaigns require government support. The only countries that have achieved 30 percent or higher rates of vaccination have had national strategies for doing so.

The tiny number of vaccines available in the developing world is an argument for targeting pregnant women. With so few vaccines available, it’s crucial that they do the most good possible. Pregnant women are also more likely to be receiving targeted maternal health care. WHO estimates that 82 percent of pregnant women attend at least one prenatal visit, making giving her the vaccine easier, especially in a country without an infrastructure for a nationwide vaccination campaign.

The same immunization can also help protect against pneumonia, a common cause of childhood deaths. An analysis of trials in Nepal, Mali, and South Africa showed that infants whose mothers had been vaccinated when they were pregnant were 20 percent less likely to develop pneumonia.

One of the biggest needs is increased research and improved surveillance of the flu in the developing world, something the WHO and the US Centers for Disease Control and Prevention are both prioritizing. Further confirmation of the heavy burden of severe flu in developing countries will make it easier to get the funding necessary to expand vaccination campaigns in those regions.

While saving lives in the short term is a strong argument for maternal vaccinations, there’s also a longer-term, life-saving calculation that experts are making by targeting this population. Scientists worry that there is significant risk in the coming years and decades of a global flu outbreak similar to the 1918 Spanish flu pandemic that claimed 50-100 million lives. Given the challenges of vaccination distribution in the developing world, entire swathes of the globe will be largely defenseless should another pandemic occur.

WHO hopes that supporting developing countries in creating national programs targeting pregnant women for immunization can provide a sort of testing ground for larger flu immunizations programs. On a smaller scale, developing countries can begin to train health care staff, procure necessary equipment for vaccine storage, develop supply chains, and build trust in the vaccine among the general population.

Because pregnant women are more likely to be regularly seeing a health care provider, experts hope that targeting them will increase demand for vaccines, which could spur governments to increase procurement and develop national distribution plans.

There’s still a lot more research that’s needed on the effects of flu in the developing world, but the evidence we do have makes it pretty clear that pregnant women are a promising population to focus on for high impact, for now and for the future.