Football is perfectly calibrated to TV. So what happens now that live TV is fading? 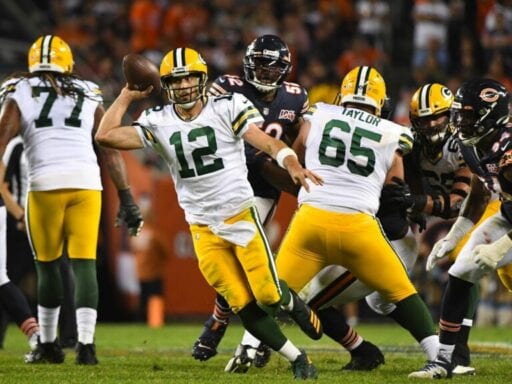 The NFL begins its 100th season on a bit of a bummer note.

How do you create an American pastime when there is no unified idea of what America is any more? That’s the dilemma the NFL finds itself in as it enters its historic 100th season. (The league began play in 1920, which technically means this is its 99th anniversary but its 100th season. It hopes you understand.)

This is, of course, oversimplistic. There was never any single idea of America across the history of the league, and whatever idea about this nation that was predominant at any given time was still sweeping lots of stuff under the rug. But the NFL rose to the dominance it enjoyed alongside the spread of television, and it came to be synonymous with a certain kind of American dream, of having the luxury of kicking back in a Barcalounger on a Sunday afternoon with a beer and maybe some snacks to yell at your favorite team.

But all at once, starting in the 2010s, the NFL has seemed ever so vincible. The public now knows so much more about how the sport increases the risk of chronic traumatic encephalopathy, which destroys the brains of too many who play it, and a series of domestic abuse scandals has also roiled the league all decade long. And that doesn’t even touch on player protests against police brutality, beginning with former 49er quarterback Colin Kaepernick kneeling during the national anthem in 2016 and making many on the right (including President Trump) very angry.

Harder to put a finger on but just as discouraging is that the quality of play has gotten sloppier, at least in this viewer’s eyes. Sure, there are plenty of exciting games in any given season, but the most recent Super Bowl ended with the Patriots beating the Rams 13-3, and the game I watched for this article ended 10-3. I could write either game off as a “defensive slugfest,” but the reality was just that both games were slogs. (I like to say that I stopped watching the NFL as much as I used to because of the way its players become battered punching bags, but how boring so many games happened to be certainly helped.)

Add to all of that the slow decline of live television as a dominant force in our society and you have a perfect storm hurtling toward a sport that as recently as 10 years ago seemed like it could singlehandedly keep the dying cable bundle alive. (How else would you watch live sports?) The recent, unexpected retirement of Indianapolis Colts quarterback Andrew Luck when he likely could have played many more years but just didn’t want to feels like an inflection point.

But so does this game, this cursed Packers-over-Bears, 10-3 game.

The NFL tries to make itself the face of America, but patriotism is no longer a simple sell

Football became such a huge sport because football was perfectly tailored to American television.

Think, for instance, of the sport football displaced as America’s pastime: baseball. With its long, action-free pauses and occasional bursts of activity, baseball was perfectly suited to the radio in a way that didn’t quite translate to TV. On the radio, the announcer’s voice became a conduit through which to experience the game; on TV, the same quality didn’t quite translate. (This is no slam against baseball, my favorite major sport, but simply to say that many of my favorite baseball memories involve the radio, where none of my favorite football memories do. There’s a reason.)

Football is a game of constant action. Every play carries with it the chance of something huge happening, and even if it doesn’t, you’re going to get the lizard-brain pleasure of seeing two men run into each other. Yes, theoretically any pitch in baseball could lead to a home run. But nearly every play in football involves a tackle, the sort of quick burst of action that plays beautifully on TV.

Except football isn’t really just constant action. It’s a hugely regimented game, with frequent pauses and the ball being regularly turned over from team to team. And because those pauses are roughly timed — as opposed to baseball, whose only similar pauses happen every half-inning — and because there’s a big break at halftime, there’s plenty of predictable space in which to sell advertising. Budweiser can say, “I want this ad to air in the first half of the first quarter,” and be reasonably certain NBC can accommodate it. So the sport was always valuable to advertisers, and it only became more so as its ratings vaulted beyond those of other sports.

My primary experience of football has always been as a commercial delivery vehicle. This is not to say that I prefer watching the commercials to watching the game. But it is to say that in any given game there are a lot of commercials, something football fans have been griping about for decades. It’s the sort of “problem” that is a huge plus for TV networks (and, consequently, for the NFL, which can charge huge ad rates).

And to be sure, if you are an advertiser, football is still your best bet. Even if plenty of people feel squeamish about the sport, it’s still the single best place in which to find a massive, massive audience. (Indeed, I loved Drew Magary’s argument that football remains popular because it makes people feel a little bad for watching it. Few other vices remain vices for just about everybody in our hyper-polarized world.) No other TV programming can match its consistency of audience levels.

And football has been all too happy to lean in to this notion of “We’re the thing all of America watches” over the years. Even in the game I watched, the trappings of vague patriotism — from support of the troops to a love of hyper-capitalism — were everywhere.

And in a game already replete with a tendency to self-mythologize, nearly every segment featured some pithy little callback to the days of yore, when men were men and a hit was a hit. I have to admit I enjoy this stuff; NBC pulling some audio of legendary Packers coach Vince Lombardi and legendary Bears coach George Halas to play after returning from commercial at one point was pretty neat. But it’s definitely a choice for the NFL to continue to depict itself as our last great institution at a time when more and more people are essentially viewing every American institution with a deep sense of skepticism.

It is no coincidence that football’s rise can be tracked alongside TV’s rise, just as it’s no coincidence that its mild ratings decline can be tracked alongside TV’s decline (though it was up ever so slightly in 2018). But it also strikes me as no coincidence that football reached its dominant heights in the 1980s and 1990s, when a belief in America as a dominant force for good in the life of the world went mostly unquestioned in popular media. America ran fastest and hit hardest. It was a hyper-masculine, hyper-competitive, hyper-capitalist, hyper-corporate place. It was a world of rich white men, but they all liked to believe they had hearts of gold.

And, of course, not every American believed in all of the above. Indeed, probably very few Americans believed in all of the vision the NFL tried to sell (though most of us probably believed in at least some of it). But in an era when this version of patriotism — super-powered dominance with a heart of gold — is increasingly being met with an “Is it tho?”, it’s no wonder that the NFL is struggling not just for purchase as a cultural force but also as something that those of us who aren’t football fans should be expected to care about, even casually.

That leaves the games, and too many of the games are drop-dead boring. Any time either the Packers or the Bears would mount either an impressive offensive drive in this game or some sort of exciting defensive stand, it would fizzle out. TV feeds on razzle-dazzle, on impossible feats of derring-do, and it’s been harder and harder to find that sort of thing in the NFL over the last several years.

It is too easy to turn writing about the NFL into a moral harangue: If you like this, you’re bad! But I don’t earnestly believe that, even as I believe the league is more of a force for negative things than it is positive ones. Football itself can still be fun. Watching it can be fun. Loving it can be fun.

But in an era when we know so much about the NFL itself, when we know all of the ways it has bungled so many serious, major issues, it’s harder to buy the idea that it is a moral force within the world instead of the slightly tawdry, rundown carnival it actually is. I’m not saying the NFL should sell itself as a thing that means well but constantly fucks up in big and small ways, but hey, that handful of words describes America pretty well, too. Maybe selling itself that way is a patriotism we all can believe in.

You probably don’t have to look far to find an NFL game, though NBC’s coverage is relegated to Sunday nights, beginning at 7 pm Eastern, with games beginning in the 8 pm hour.

Why Hamilton is as frustrating as it is brilliant — and impossible to pin down
What it’s like to interpret for coronavirus patients remotely
“It isn’t a question of politics”: Fauci on calling out Sen. Rand Paul’s misinformation
Report: Brett Kavanaugh racked up thousands in debt buying baseball tickets
Federal judge blocks Medicaid work requirements in Arkansas and Kentucky
This coronavirus model keeps being wrong. Why are we still listening to it?