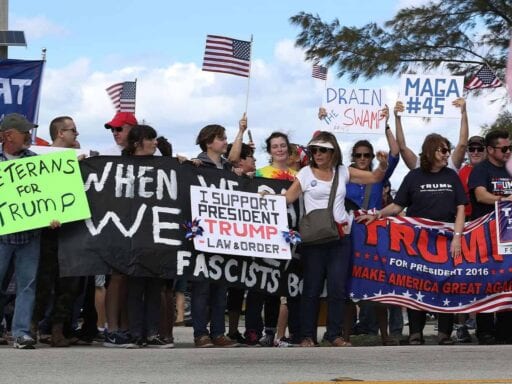 President Donald Trump is substantially less popular a year and a half into his presidency than when he initially took office. His popularity in the Midwest has completely deflated. And more people disapprove of him than approve in almost every single swing state that proved crucial to his 2016 victory — except in one: Florida.

Trump’s state-by-state approval rating has significantly dropped over the past year and a half. In January 2017 he had a net-positive approval rating in almost every state in the country, except California, Massachusetts, Vermont, and Rhodes Island. That’s far from the case now.

As you can see, Trump is currently polling better in Florida than he is in Arizona, Iowa, Ohio, Wisconsin, Pennsylvania, Michigan, Utah, Nevada, or North Carolina (all states that proved crucial to his 2016 presidential win).

Compare this, for example, to Trump’s approval ratings when he was inaugurated in January 2016. Here’s the map from then, from Morning Consult:

The difference is striking — and really important to consider before the 2018 midterm elections. Trump and the presidency may not be on the ballot, but congressional seats, statehouse races, and governorships are, and Democrats have a lot of ground to gain if they want to reshape the country’s power dynamics.

Trump’s strength in Florida is bad news for the Democrats this coming fall:They are not only defending a U.S. Senate seat there (Sen. Bill Nelson’s reelection bid is contested by Republican Rick Scott, a former governor), but they also hope to pick up several vulnerable Republican-held seats.

In Florida Trump’s voter base isn’t comprised of the overlooked white working-class voters who figured prominently in postmortems of the 2016 election. As Michael Grunwald wrote for Politico, the “economically secure retirement meccas” that delivered Trump his presidential victory are giving Republicans hope they can stave off a possible “blue wave” election in 2018:

For all the hype about Puerto Ricans moving to the Sunshine State after Hurricane Maria, or high school students like the Parkland gun control activists turning 18 and registering to vote, any Democratic surge could be offset by the migration of Republican-leaning seniors who like Florida’s balmy weather and lack of income tax.

This read is consistent with a recent Axios/Survey Monkey poll that indicated Scott had a 3 percentage-point lead over Nelson in Florida. That poll also showed Republican sentiment favored the unseating of Democratic senators being unseated in Indiana and North Dakota, where Trump remains popular.

But it’s not all bad news for Democrats. Trump’s lack of popularity in Pennsylvania, Wisconsin, and Michigan, and his decreasing popularity in states like Missouri, could prove critical to the Democrats’ gaining more power in November.

It won’t be an easy election for Democrats, but enthusiasm appears to be on their side.